While many Sydney restaurants are already taking dine-in bookings for when lockdown restrictions ease, not all are racing to reopen. 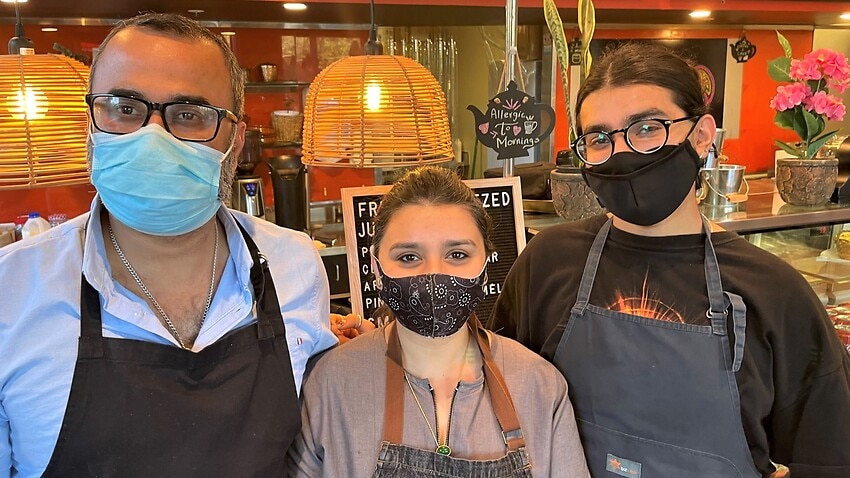 Despite heavy losses over the past three months as her restaurant dining room stood empty, Tasneem Abbas isn’t planning to reopen as soon as Sydney’s lockdown restrictions ease later this month.

“In my small restaurant, if 10 to 12 people are dining in, how do we afford all the overheads? Financially we know that it is going to be really hard," the 40-year-old migrant from Pakistan told SBS News.

“Until the four-square-metre restrictions are lifted, we will not open up for sit-down dining. It is going to e just takeaway."

Ms Abbas' restaurant Zakinsa is in Chatswood in Sydney's north and is among 20,000 restaurants to have been impacted by coronavirus restrictions. Total losses since Sydney's lockdown started on 26 June are estimated to be in the billions.

The family-run business has no paid staff, and as such cannot access the NSW government's JobSaver program. They are struggling to pay their $7,500 monthly bills.

“We are not able to meet those expenses, so we have taken loans from friends and family, and we are really thankful to them,” Ms Abbas said.

Their current monthly takeaway income of around $5,000 is one-quarter of the amount they earned until June, from a full dining room plus takeaway.

Ms Abbas - a descendant from a family of foodies - moved to Australia in 2017.

“It is a big part of Pakistani culture to cook. It is a way of giving utmost respect and hospitality to guests, who are considered to bring wellbeing and good fortune,” she said.

With the help of government grants and 40 per cent rent relief, the family hopes to hold out until trading conditions improve.

“With so many people getting vaccinated, we are hopeful that later in the year we can reopen,” Ms Abbas said.

Meanwhile, it's a different story for Adetokunboh Adeniyi across the harbour in Sydney's inner west.

Mr Adeniyi is busy taking orders and getting ready to reopen his Nigerian restaurant Little Lagos, in the suburb of Enmore, when restrictions ease.

“The first thing we're going to do is go over our menu,” he said.

“I am a little bit anxious to be honest, but excited at the same time.”

SBS News first visited Little Lagos in July when the doors had closed. Monthly losses were running at $35,000.

Since then Mr Adeniyi has received JobSaver payments and re-negotiated expenses, and can now see a way forward.

"We plan to reopen the dining room in October and bookings are coming in already - we can't wait to have people back in here again," he said.

He said a wave of community support during lockdown has encouraged the restart.

"[Reopening] is the best thing that's happened to us, since this whole pandemic started. It really gives us hope that what we're doing is really, really special."

Mr Adeniyi said he is not concerned about needing to police proof of vaccination certificates.

“Most people are getting vaccinated. And when they come out, I'm pretty sure they expect that there will be some kind of requirement, so we don't think that should be any problem for us to confirm that people are vaccinated,” he said.

A new report released this week by Zeller suggests the majority of diners won't be bothered either.

After surveying 1,000 people Australia-wide, the report found that 74 per cent supported venues requesting a proof of vaccination certificate to dine out.

"What this shows is a real hunger to get out and start supporting restaurants in their local community after extended lockdowns," Zeller director of growth Josh NcNicol said.

The report also found that 83 per cent of diners surveyed said they care more about COVID-19 safety and adhering to rules than the price of a meal.

Though Ms Abbas expects patrons to travel for holidays once restrictions lift, she remains upbeat about her restaurant's future.

“We really have high hopes that business will pick up and we can come up from the depths,” she said.