With the COVID-19 crisis pushing India's health care system past breaking point, online grassroots networks have sprung up to get aid to people who need it.

Rajni Gill woke up with a slight fever in mid-April, the first warning that she had COVID-19. Within a few days, she was breathless and nearly unconscious in a hospital.

Desperate to arrange plasma treatment for Dr Gill, a gynaecologist in the city of Noida, her family called doctors, friends, anyone they thought could help. Then her sister posted a plea on Facebook: “I am looking for a plasma donor for my sister who is hospitalised in Noida. She is B positive and is 43.”

The message, quickly amplified on Twitter, flashed across the phone of Srinivas B.V., an opposition politician in nearby Delhi, who was just then securing plasma for a college student. He deputised a volunteer donor to rush to the blood bank for Dr Gill.

“The administration and systems have collapsed,” Mr Srinivas said. “I have never seen so many people dying at the same time.”

“Mine and my team’s work may be a drop in the ocean - but a drop nevertheless,” he said. 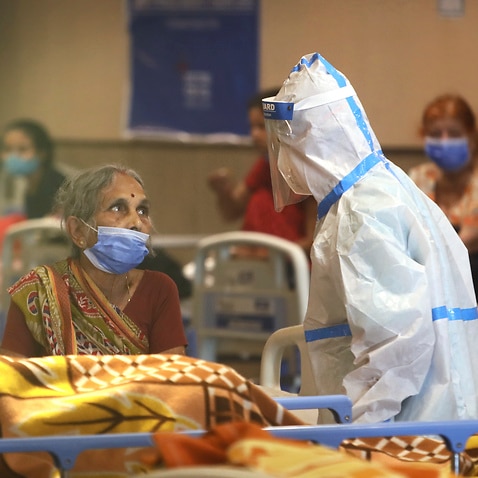 With India’s health care system overwhelmed by India’s unprecedented COVID-19 surge, which is bringing about 400,000 new cases and thousands of deaths each day, desperate relatives and friends of the infected have resorted to sending SOS messages on social media. And many of those calls are being answered.

Some people need medical oxygen, which is nearly impossible to find in Delhi, the capital. Others are hunting for medicine that goes for high prices on the black market, or for ventilators that are exceedingly rare.

The pleas are reaching tech-savvy engineers, lawyers, nongovernmental organisation workers, politicians, doctors and even tuk-tuk drivers, who have mobilised online to help the sick, some of them hundreds of miles away. Collectively, they have formed grassroots networks that are stepping in where state and national governments have failed.

It is a role that Mr Srinivas, 38, has played before in times of crisis. 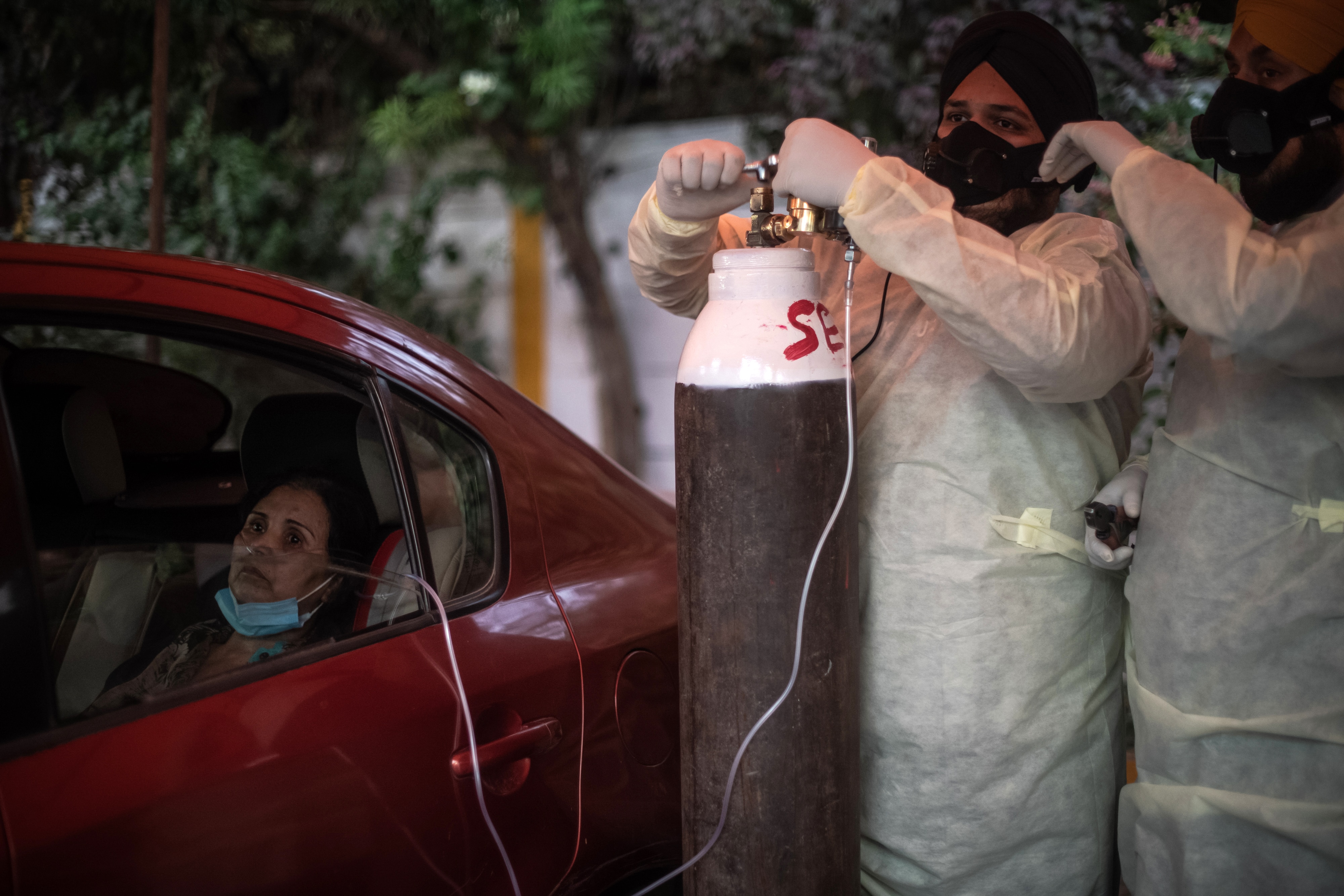 COVID-19 patient Adila Ebadi, 58, is treated by volunteers at a makeshift clinic providing free oxygen outside Gurdwara Damdama Sahib in New Delhi on 3 May.
Getty Images

As the president of the opposition Indian National Congress party’s youth league, he has provided support after earthquakes and floods. He has worked to get textbooks to underprivileged children and medicine to people who couldn’t afford it.

Early last year, when the pandemic first struck and India locked down, Mr Srinivas galvanised young volunteers across the country who distributed food for stranded migrants, along with more than 10 million masks. He now heads a team of 1,000 people, including 100 in Delhi, the centre of the current outbreak.

“I have grown up on Mahatma Gandhi’s ideals,” said Mr Srinivas, who aspired to be a cricket player before entering politics. “I cannot believe it that I am out here today, trying to help so many people.”

The cries for help on Twitter and Facebook started spreading “like wildfire” in early April, Mr Srinivas said. He created the hashtag #SOSIYC so people could connect to his organisation, the Indian Youth Congress.

His team advertises for plasma donors online, and 5,000 have signed up. He also enlists psychologists to counsel donors about the four-hour procedure.

India’s loose online aid networks rely on tools and techniques commonly used in marketing and other forms of messaging on social media. Families tag people with large followings or specialised skills who might be able to amplify their messages, while volunteer organisers use keywords to filter the flood of requests.

Abhishek Murarka, who works in finance in Mumbai, decided he needed to do more than retweet messages. He started searching for the terms “verified,” “confirmed” and “available” on Twitter to track down specific leads on COVID supplies. He has since posted an 84-second video explaining his techniques so that others can use them.

Hundreds of miles away, Praveen Mishra, 20, who runs a startup in the southern city of Bangalore, studied Mr Murarka’s video and applied his own filters to search for beds, oxygen and medicine. He was able to get a particular medicine to a patient in Delhi after confirming that it was available in Hyderabad.

A health worker attends to a young COVID-19 patient who is having trouble breathing outside Gurudwara Sri Guru Singh Sabha in Ghaziabad, Uttar Pradesh on 3 May.
LightRocket

“Initially I felt very scared, that there are too many cases and that I will not be able to help at all,” Mr Mishra said. “Now I am calling 20 leads per day and verifying their needs.”

Some people are tapping into resources around the world. Nikhil Jois, a technology executive in Bangalore, and his own team vetted charity organisations that supplied oxygen, food and sanitary napkins. He whittled his list down to just over a dozen organisations, some of which could accept international donations.

His team then asked several companies in India to link to the list. And he began emailing executives, investors and bestselling authors in the United States, asking them to give.

“The most beautiful part of social media is that you trust strangers,” Mr Jois said.

That, of course, is not always a good idea. Dubious accounts offer shoddy or exorbitantly priced goods to desperate people, and leads on supplies can quickly evaporate. And trolls will always inflict hate on the vulnerable.

But with India in crisis and travel not a safe option, social media has been the only way for some people to find help.

Aditya Jain, who is in Delhi, recently put out a plea that went viral on Twitter. He felt helpless as his elderly aunt and uncle, about 130 miles away in Agra, struggled during the strict lockdown there.

His aunt suffers from a spinal disease, and his uncle, a diabetic, needs weekly dialysis. Unable to go out, they were eating just one meal a day. They couldn’t care for themselves, and at times they couldn’t make it to the bathroom.

A health worker collects a nasal swab sample from a girl to test for COVID-19 at primary health centre in Hyderabad on 3 May, 2021.
AFP

Through LinkedIn, he found an organisation that caters to seniors. He filled out a form, providing their information. The next morning, volunteers showed up at their doorstep with breakfast and adult diapers.

“Social media is like a godsend for us,” said an emotional Mr Jain, who has lost one of his other relatives to COVID.

Mr Srinivas said he was getting at least 10,000 messages on Twitter every day and followed up on all of them. For every 100 requests, he said, he can usually help 30 to 40 people, given the shortages.

Even foreign diplomats in Delhi have reached out to his organisation for help. On Sunday, the New Zealand High Commission tagged the Indian Youth Congress on Twitter in an appeal for oxygen cylinders. Since the group is part of the political opposition, that got a lot of attention, given the intense criticism of Prime Minister Narendra Modi’s handling of the pandemic.

The commission said its appeal had been “misinterpreted, for which we are sorry.”

Mr Srinivas’ volunteers use direct messaging to collect data on people needing help, then classify them by risk profile. They work with people on the ground to arrange beds and plasma donations for the most serious cases. Others are put in touch with doctors who can provide remote consultations.

Often, the system’s deficiencies are too great to overcome.

Mahua Ray Chaudhuri frantically tagged Mr Srinivas looking for oxygen for her sick father. His team found some, but that wasn’t enough: No ICU beds were available.

“At least I could get him oxygen, and he died breathing,” Ms Chaudhuri said by telephone, breaking down. “This help from strangers on Twitter was like a balm for our disturbed minds and souls.”

But Mr Srinivas’ team was able to get plasma for Dr Gill, the gynaecologist, just in time. She is now recuperating in a hospital on the outskirts of Delhi.

“I feel choked with emotions,” she said. “Coming out of such a fatal time, I realise I have been helped selflessly by complete strangers.”

She recently called Mr Srinivas to thank him. “Though I have never met her, it was a humbling experience hearing her voice,” he said. “I am so relieved she made it.”