Birds Eye View features the stories of 18 women who have been incarcerated in Australia’s Top End. Here, two of them speak to SBS News about why it matters that their stories will be heard.

Rocket has been haunted by numbers her whole life.

Six was the age she first tried weed and was told she was “a big kid now”.

Eighteen was the age she was first incarcerated after years of “dancing between morphine and heroin”.

“I’ve tried every drug and I’ve sort of always used drugs as my everything,” she told SBS News.

“The first time I went to jail I was scared; I had no idea what to expect.” Having spent most of her adult life in jail, at 35 she says it’s important to her not to become just another number in the Australian justice system.

“I feel like women in prison are treated like a statistic; we’re just a number and we’re not much more than that.”

“It’s good to be heard and to get our story out there.”

Rocket has bounced between three prisons and has just finished a stint at the Darwin Correctional Centre - the main correctional facility for the Northern Territory - which she says will be her last.

It was there she began working with more than 70 women to make the new podcast Birds Eye View. Seventeen of them were her fellow inmates inside Sector Four. Rocket when she was younger.
Aneeta Bhole/SBS News

The first five episodes of the 10-episode series were released on Sunday for International Women’s Day and aim to give a voice to those who felt their voices were not being heard.

“Whether we like to admit it or not we all need a hand up,” she said.

“I sat in jail this last time for 18 months and none of the people who I used to hang out with came to see me, I got fed up of being used and abused by the drug world.

“I hope the podcast lets women know that they aren’t alone, and we’ve got to be here to support each other.”

The podcast features interviews with the women as well as audio “from the holding cells where women are strip-searched to the industries section where Qantas headsets are cleaned”. There are up to 80 women in the Darwin Correctional Centre.
Nichole Taylor

She said it was when she discovered ice that her life “spiralled out of control”.

“I ended up going to jail for selling ice, I had a five-year sentence, two years which I served in prison and I’m now doing the other three years out,” she said.

“I would have been about 26 and it was my first time in prison, so it was pretty scary, and I didn’t know how long I was going to be in there and I was coming off drugs as well.

“It’s definitely isolating, you know, you’re being ripped away from your life on the outside, and well, being held against your will on the inside. It was very scary.”

Taise said she used the podcast as a way to reconnect, tell her story and stay out of trouble.

“It gives people an idea of what goes on inside it gets rid of the stigma that prisoners are just, well ... we’re still people at the end of the day,” she said.

“Anyone can make a mistake and end up in that situation. It just gives you a personal perspective on people on the inside.

“You’ve got a lot of time on your hands, often you’re sitting there with nothing to do that’s when you start acting up or start trouble or it sends you into a bit of a state of depression.” Seventeen women inside the correctional centre feature in the podcast.
Aneeta Bhole/SBS News

Johanna Bell is the executive producer of Birds Eye View.

“It took about two years to make this podcast and it’s about building the capacity and confidence of women to share their stories,” she said.

“A lot of people don’t even realise that there are women in the Darwin Correctional Centre, I think it’s about 1,100 [people] and up to 80 women, that means that they’re always a minority.”

Johanna said it is the first time she has seen a podcast like this being made and it was important to give women in the centre a positive outlet. “We really wanted to challenge stereotypes, the idea that everybody who ends up in prison is broken, or a victim, or worthless, or a waste of space.

“They’ve heard those stereotypes, they know they’re not true they wanted to show the complexity of their stories, the difference between them and other women and the number of different voices that end up in prison.” The first five episodes of the podcast have been released.
Jett Street

Several Indigenous women in the centre took part in the podcast, with Johanna saying it was important the podcast was used as a platform for their voices too.

“Women, particularly Indigenous women, are one of the fastest-growing population of prisoners in the world and to date, there has been very little opportunity for them to be heard,” she said.

“Birds Eye View is giving them a voice, elevating their story, and challenging preconceptions about why women end up in prison. 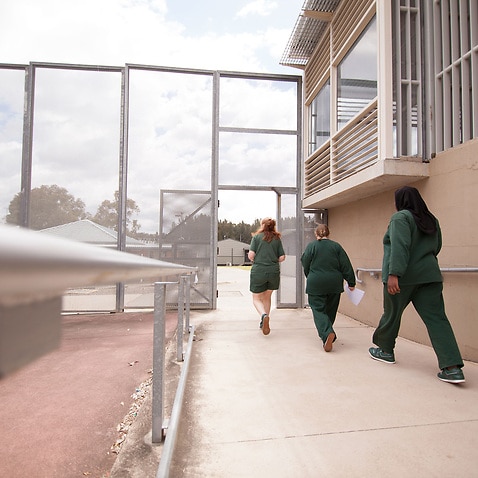 “What really struck me was that even though they’d been through difficult times they showed immense courage and resilience and really the podcast is about survival.

“They decided to call it Birds Eye View because they wanted to give people a new perspective on women in prison.”

“I’m happy that it opened up the door to more things for women in the centre, hopefully it will open up more programs for women,” she said.

“It’s hard enough being in prison so I think to have more things available like this definitely be worthwhile.” Rocket is now living at her mother’s place in Darwin with her dog and “best friend” Ollie.

She says during her time in the centre she realised it was time for her to stop the cycle of incarceration she had been experiencing.

“The message I’d like to get across to other women in prison is that ‘it gets better’.”

“Don’t be afraid to ask for help everyone makes mistakes and as long as you learn from your mistakes then it’s not really a mistake it’s a lesson.”

To listen to the podcast visit birdseyeviewpodcast.net

Get advice and support about drug use at Reach Out. Readers seeking support with mental health can contact Beyond Blue on 1300 22 4636. Resources for young Aboriginal and Torres Strait Islanders can be found at Headspace: Yarn Safe.