Maths teacher and internet sensation Eddie Woo has won the 2018 Australian Local Hero award during a ceremony at Parliament House in Canberra.

His online "WooTube" channel has more than 100,000 subscribers while his videos have attracted more than eight million views worldwide. Australian of the Year 2018: NSW physicist takes out top prize

Collecting the award at a ceremony at Parliament House in Canberra on Thursday, he insisted he was no more a hero than anyone else and there was nothing special or extraordinary about his classroom.

Instead, he had simply opened a window through the internet into the hard work and dedication of educators in schools right across the country.

"I stand before you, not as an individual, but as a proud representative of every teacher around the country who labours day after day, year after year, because we know the power of giving a child the priceless gift of an education," he said. 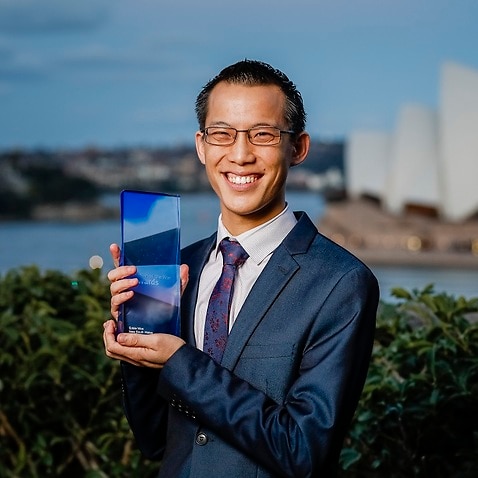 "Every Australian must play our part in honouring our schools and those who work in them. Our children and future generations are dependent on it."

The son of Chinese-Malaysian parents who migrated to Australia to get a better education for their children, Mr Woo decided to pursue a career in teaching to "pay it forward".

Mr Woo became the first teacher to give NSW's Australia Day address on Tuesday, saying he believed mathematics could break down social barriers.

Sydneysider and world-renowned physicist Michelle Yvonne Simmons was named Australian of the Year.

Premier Gladys Berejiklian says the awards were well-deserved recognition for two of the state's most passionate advocates for science and mathematics.

"These wins are going to raise the profile of the importance of science and teaching in communities across Australia and inspire young people to consider careers in these fields," she said in a statement on Friday.