Media outlets around the world have described the raids targeting Australian journalists as an attack on press freedom. 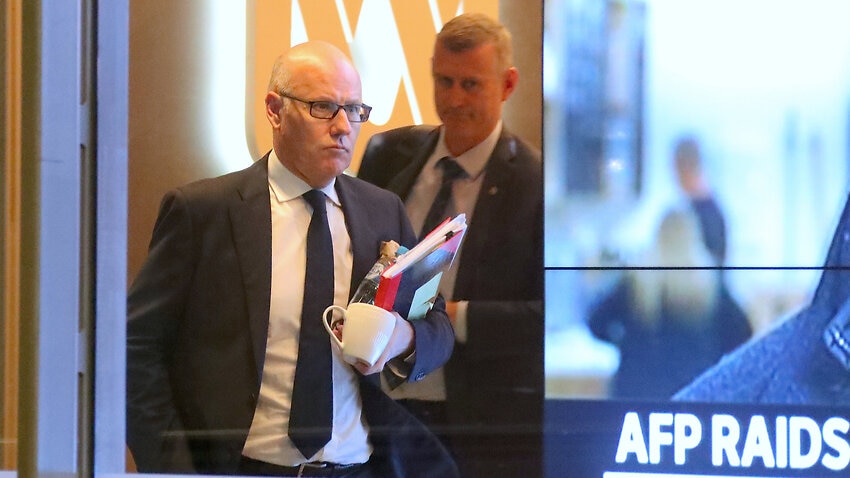 Executive Editor of ABC News John Lyons is followed by an Australian Federal Police officer as they leave the office after the raid. Source: AAP

The AFP raid on the ABC's headquarters in Sydney over 2017 stories about Australia's special forces in Afghanistan followed a police search of a News Corp journalist Annika Smethurst's Canberra home.

In a statement, the BBC said: "This police raid against our partners at ABC is an attack on press freedom which we at the BBC find deeply troubling.

"At a time when the media is becoming less free across the world, it is highly worrying if a public broadcaster is being targeted for doing its job of reporting in the public interest."

Sincere thanks to international colleagues at the BBC, CNN, AFP (the French news agency!), Al Jazeera, RTE, CBC, NBC and many others for words of support for @abcnews, our journalists and the right to tell stories in the public interest. https://t.co/hjaQjjUfpy

The BBC's head of newsgathering Jonathan Munro said the raids were "deeply troubling" and were "completely contrary to free media".

The police action made headlines around the world with the New York Times noting that "no other developed democracy holds as tight to its secrets".

"The raids are just the latest example of how the country's conservative government will go to scare officials and reporters into submission."

Watching AFP raids with concern. Security needs to be balanced with transparency and accountability. Journalists and whistleblowers must be protected. #ABCraids #AFPraids #PressFreedom #auspol

The power of the police to search through thousands of emails of journalists in search of sources shocked CNN's chief media reporter Brian Stelter.

"We almost never see this in a democratic country like Australia," he said. "Something very troubling (is) happening on multiple fronts in Australia."

Reporters Without Borders said the images of AFP officers entering the ABC headquarters in Sydney on Wednesday was more like a scene from an authoritarian country, rather than a democracy.

“Persecuting a media outlet in this way because of a report that was clearly in the public interest is intolerable,” said Daniel Bastard, the head of RSF’s Asia-Pacific desk.

“This kind of intimidation of reporters and their sources can have devastating consequences for journalistic freedom and independent news reporting.”

ABC Managing Director David Anderson said he was heartened by the international coverage and support from colleagues across the globe.

"I had an email come in overnight from the director-general of the BBC offering his personal support," he told ABC radio on Thursday.

"This has got the world's attention as to how important it is that we are able to go about our journalism."