The last male northern white rhino has died in Kenya.

The rhino, named Sudan, was 45-years-old (about 90 human years) and lived at the Ol Pejeta Conservancy with two other female northern white rhinos, Fatu and Najin.

Fatu and Najin are now the last rhinos of this kind in the world and the fate of the species lies in their ability to become pregnant through IVF.

"We on Ol Pejeta are all saddened by Sudan’s death. He was a great ambassador for his species and will be remembered for the work he did to raise awareness globally of the plight facing not only rhinos, but also the many thousands of other species facing extinction," Ol Pejeta Conservancy said on Twitter.

"Additionally, his genetic material was collected yesterday and provides a hope for future attempts at reproduction of northern white rhinos through advanced cellular technologies."

"The only hope for the preservation of this subspecies now lies in developing in vitro fertilisation (IVF) techniques using eggs from the two remaining females, stored northern white rhino semen from males and surrogate southern white rhino females." 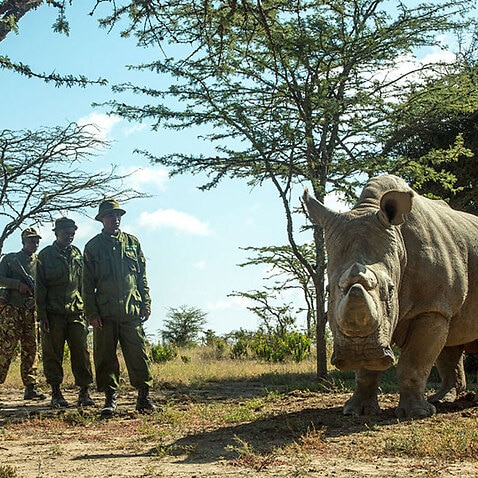 Can the northern white rhino be saved when the last male on Earth dies?

Sudan's health rapidly deteriorated after he developed an infection on the back of his right leg in 2017. Since then he had battled further infections.

The northern white rhino population in Uganda, Central African Republic, Sudan and Chad was largely wiped out during the poaching crisis of the 1970s and 80s, fueled by demand for rhino horn in traditional Chinese medicine in Asia and dagger handles in Yemen.

These rhinos arrived at the conservancy in 2009 from Dvur Kralove Zoo in the Czech Republic. On February 28, 2018, Sudan's poor health was revealed to the world.

Bindi Irwin has been among many expressing condolences on social media.

"Today was heartbreaking for us all as the world says goodbye to Sudan, the last male Northern White Rhino on Earth. We are sending all our love to the team at @OlPejeta who have lost part of their family today. Now, more than ever, we must stand together and protect our rhinos," she tweeted.

Today was heartbreaking for us all as the world says goodbye to Sudan, the last male Northern White Rhino on Earth. We are sending all our love to the team at @OlPejeta who have lost part of their family today. Now, more than ever, we must stand together and protect our rhinos. pic.twitter.com/uTX2kmUjEL

Last year, the conservancy's CEO Richard Vigne said IVF for the northern white rhino would be challenging, costly and controversial but it was considered the "last option" to save them.

Director of International Projects at the Dvur Kralove Zoo Jan Stejskal said that Sudan's death was "a cruel symbol of human disregard for nature and it saddened everyone who knew him".

"But we should not give up. We must take advantage of the unique situation in which cellular technologies are utilised for conservation of critically endangered species. It may sound unbelievable, but thanks to the newly developed techniques even Sudan could still have an offspring."