How you can help those affected by the world's largest humanitarian crisis.

As the three-year conflict continues to rage in Yemen, humanitarian organisations are warning that the worst may be yet to come.

According to the UN, some 22.2 million people are now in need of life-saving assistance, including food, safe water, nutritional support and basic medical care.

World Food Programme director David Beasley said on Wednesday that "time is running out" for aid groups to keep Yemen from "slipping into a devastating famine".

Head of Save the Children International Helle Thorning-Schmidt said this week "[the war] risks killing an entire generation of Yemen's children". A severely malnourished infant is bathed in a bucket in Aslam, Hajjah, Yemen.
AAP

Yemen has been devastated by a war between forces loyal to President Abdrabbuh Mansour Hadi and those allied to Houthi rebels.

The UN has counted more than 13,000 civilian deaths and tens of thousands of people who have been injured. They say Saudi coalition strikes – part of the fight to restore Mr Hadi to power – have been responsible for the majority of deaths and injuries. 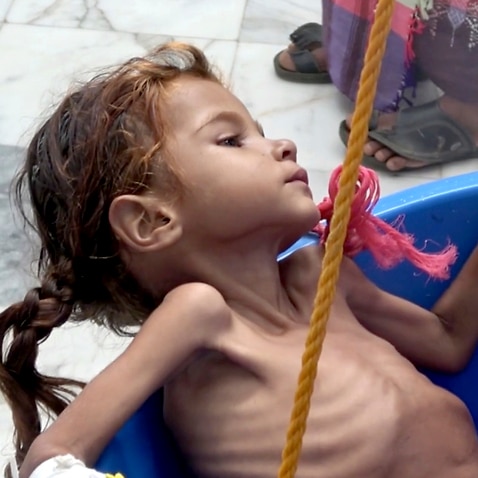 The following humanitarian organisations have established funds to help those in need:

"Today, more than 11 million children - nearly half the entire population of Australia - are in dire need of food, medical treatment, education, water and sanitation," the group says.

"UNICEF is one of the few international aid agencies working in Yemen to get these millions of children and their families the humanitarian support they so urgently require."

Oxfam says it has been in Yemen for more than 30 years, working with government authorities, as well as civil society organisations, to improve the water and sanitation services, and livelihoods of thousands of people living in poverty.

"Our focus is on women's rights, health care, disaster preparedness, and helping people have a say in the decisions that affect them," material from the group says. A explosion in Yemen.
AAP

Save the Children says it is on the ground, delivering critical help to children in Yemen and "right now we are ramping up our response to do even more".

The aid agency also says it sets up safe spaces for children to play and learn, and provides professional emotional care for children to help them come to terms with what they have experienced. A Yemeni child looks through a hole in the ceiling of a severely damaged house that reportedly was destroyed by Saudi-led airstrikes.
AAP

MSF says it is working in 13 hospitals and health centres in 12 governorates and supporting 20 public health facilities across the country.

"Indiscriminate bombings and chronic shortages of supplies and staff have led to the closure of more than half of Yemen's health facilities," it says.