The proportion of Australians over the age of 65 is expected to grow rapidly over the next few decades, increasing the need for social support and companionship for older Australians.

With rapid growth expected in Australia's residential aged care sector over the next few decades, concerns are being raised about how best to combat isolation and loneliness amongst residents.

For residents who may have limited English, isolation can be further exacerbated, with some dementia sufferers reverting back to their first language. Elfa Lillis the Head of All Saints Grammer said the school and St. Basil's Nursing Home have had an ongoing relationship for a number of years - where students visit the Greek home to connect with residents.

"Opportunities like this allow the children to connect with the local community and to also understand their responsibility of giving back to their society and community at large."

In this not-for-profit home; students cook, make beds and assist with meals. The experience for the students is hands on, and for some of the students it's initially a bit confronting.

"At first we we're a bit surprised because I've never been to one before it's a little bit daunting at the beginning. But then when we came in and we have seen everyone it is quite nice that they're getting help and they're really happy to see people visiting them."

Christos Binos is also in year 11 and said it made him feel good helping others.

"There are many jobs out there, certain jobs that pay very well others not so much but I don't think you can put a price on helping your fellow human being."

Along with assisting with practical tasks, the students also provide companionship for residents.

The CEO of St. Basil's Father Nicholas Stavropoulos said isolation was an ongoing issue for some residents.

"We have lots of community groups visiting as well, but the biggest thing for the elderly who are often stuck in bed or a chair is to have someone touch them, speak to them, hold their hand."

Most of the residents welcomed the presence of the students including George.

"It's really great. The children they seem so free," he said.

Fellow resident Maria, originally from Athens, shared his enthusiasm for the students visits.

"I feel very happy. Happy to see them all," she said.

There are more than 172,000 people living in permanent residential aged care in Australia and that number is rising rapidly. 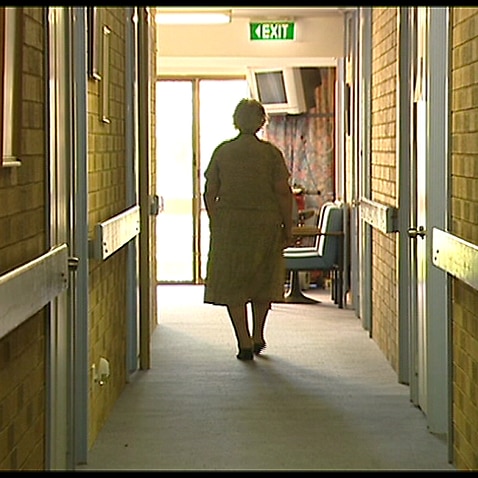 There are currently just over three million Australians aged over 65 - by 2050 that number is expected to jump to over eight million.

"In fact we're exploring the idea of actually having a pre-school on each of our sites. We've seen some good research coming out of the United States and Scandinavian countries showing that that interaction between the very young and the very hold can be fruitful for both."

School Principal Elfa Lillis said volunteering teaches students about being pro-active in life not only in helping others but also in challenging themselves.

"It's about giving back to the community, it's about being active participants, not being bystanders and just going for the ride. It's about how they are going to add value to society," she said.