Bouwman hits the mark for maiden stage win at Giro

Koen Bouwman took a maiden Grand Tour stage win on Stage 7 of the Giro d’Italia with a stunning final surge to win on a steep kick to the finish after an attacking day’s racing from the breakaway. 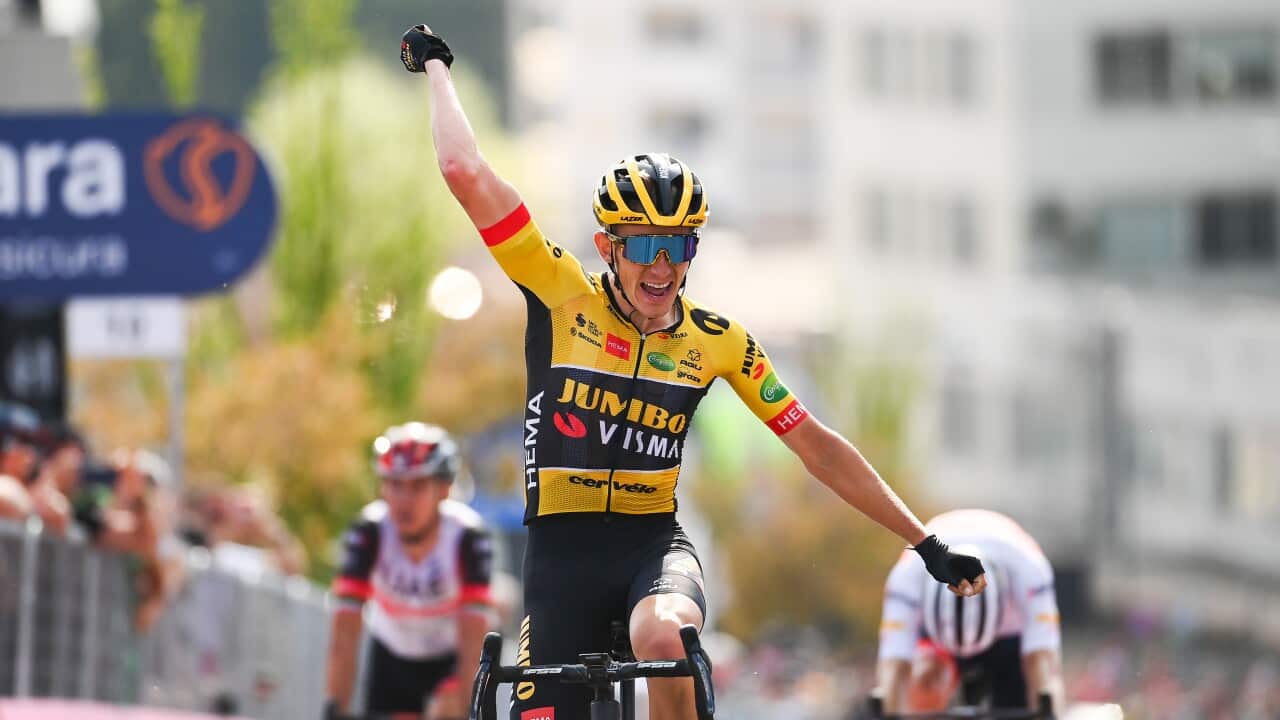 Bouwman (Jumbo-Visma) was aided in the breakaway by the presence of teammate Tom Dumoulin who played the role of support teammate in the finale of the race. Bouwman was then able to capitalise on the former Giro d’Italia winner’s work with a stunning final sprint that saw him jump away on the steep slopes of the short hill into the finish line at Potenza.

"It's unbelievable. I can't believe it," said Bouwman. "It was such a hard day. We were in the final with four riders and two of us. Tom did a superb job in the last 2km.

"I was feeling good all day. One time on the climb I was in trouble but I came back and actually I was confident for the sprint. It was steep but when I started to sprint I felt so much power left. I looked behind with 50 metres to go and saw I had a big gap - perfect."
Advertisement
Bauke Mollema (Trek-Segafredo) took second and Davide Formolo (UAE Team Emirates) third on a day where the breakaway took the spoils and the action was limited in the general classification fight, with Juan Pedro López (Trek-Segafredo) alert to the moves that were made to maintain his race lead.

There were attacks aplenty in the early kilometres of the 196-kilometre stage from Diamante to Potenza, with Thomas de Gendt (Lotto Soudal), Alessandro de Marchi (Israel Premier Tech) and Wout Poels (Bahrain Victorious) all spending time solo up the road as they tried to form the early move on a day where the attackers were judged pre-stage as a good chance to take the stage victory.

The first 75 kilometres of the race were run very hard as the hopefuls for the stage win weren’t able to establish a group to the peloton’s liking.

Richard Carapaz (INEOS Grenadiers) threw the cat amongst the pigeons with an attack with 138 kilometres to go alongside teammate Jhonathan Narvaez and Mathieu van der Poel (Alpecin-Fenix) going clear and setting the peloton on high alert.

BikeExchange-Jayco responded to shut down the move and then it was the turn of the current top riders on the general classification to fight it out, with second overall Lennard Kamna (BORA-hansgrohe) attacking and the incumbent pink jersey Juan Pedro Lopez (Trek-Segafredo) moving to follow his German rival.
Watch more on SBS On Demand
Stage replay: Stage 7 - Giro d'Italia 2022
Highlights show: Stage 7 - Giro d'Italia 2022
That move was neutralised and the wash-up saw Davide Formolo (UAE Team Emirates) as the lone rider left out the front of the race after a strong ride that outlasted the other initial breakaway attempts.

With 127 kilometres left, a strong group moved clear of the peloton to join Formolo, with Dumoulin, Bouwman (both Jumbo-Visma), Poels, Davide Villela (Cofidis), Mollema (Trek-Segafredo) and Diego Camargo (EF Education-EasyPost) making the bridge over to the Italian.

The peloton finally relented, giving the breakaway some leeway with Trek-Segafredo taking up the pace-making, with Bouwman the closest to Lopez’s overall lead, the team of the leader also playing the game of riding while also having a rider in Mollema in the move.

Bouwman looked the quickest on the climbs, and he was first through the KOM points over the Monte Sirino and the Montagna Grande di Viggiano to move himself into the lead of the mountains classification by the day’s end.

The gap topped out at just under six minutes, putting Bouwman briefly in the virtual pink jersey, but an INEOS-led peloton began to reduce their advantage on the final portion of the stage, with Poels losing contact from the front of the race.

Dumoulin was the first to put in an attack from the breakaway, surging on the ascent to La Sellata, which saw Camargo and Villela dropped from the move. The former Giro d’Italia winner attacked a further two times, which had the dangerous result of dropping his own teammate Bouwman, and Mollema used the opportunity to make his own attack.
The Dutchman was dragged back, then Formolo put in his own move before being recovered. Bouwman returned to the front of the race before the summit, again claiming the mountain points on offer to pad his lead in the classification. Dumoulin played the role of support teammate from there on, riding on the front of the group of four.

Mollema put in a succession of attacks with 8 kilometres remaining, with Bouwman closely marking him each time. Formolo was slower each time to respond but managed to make his way over while Dumoulin was dropped, but returned once the pace went out of the attack.

Dumoulin then weathered a few accelerations to lead into the final steep few hundred metres before the finish, where Bouwman paid off his teammate’s efforts, putting in a big attack that saw him catch Formolo and Mollema searching for answers as the Dutchman claimed his first Grand Tour stage win.

Mollema followed two seconds behind, with Formolo third and a jubilant Dumoulin celebrating along with Bouwman in fourth.

The peloton came across the finish line two minutes and 59 seconds after the winner, with Kämna putting in a surge to see if he could distance López, with the two finishing on bunch time and the Spaniard retaining his hold on the overall lead.
READ MORE
How to watch the 2022 Giro d'Italia LIVE on SBS
Giro d'Italia 2022: Stage-by-Stage
The Giro d’Italia continues with Stage 8, a route that starts and finishes in Napoli with some climbs featured on a circuit that will be a testing one for sprinters and puncheurs. Watch from 9.25pm (AEST) on SBS On Demand, or tune in when the SBS broadcast starts at 11pm. WA viewers can watch via SBS VICELAND from 9pm (AWST).
SHARE
Watch the FIFA World Cup, Tour de France, Giro d’Italia, Vuelta a España, Dakar Rally, World Athletics / ISU Championships (and more) via SBS On Demand – your free live streaming and catch-up service.
Watch now