If consistency and durability are any guide, Australia defender Bailey Wright is on his way to a long and illustrious national team career as he jousts with Trent Sainsbury and Matthew Spiranovic for starting honours under the reign of Ange Postecoglou. 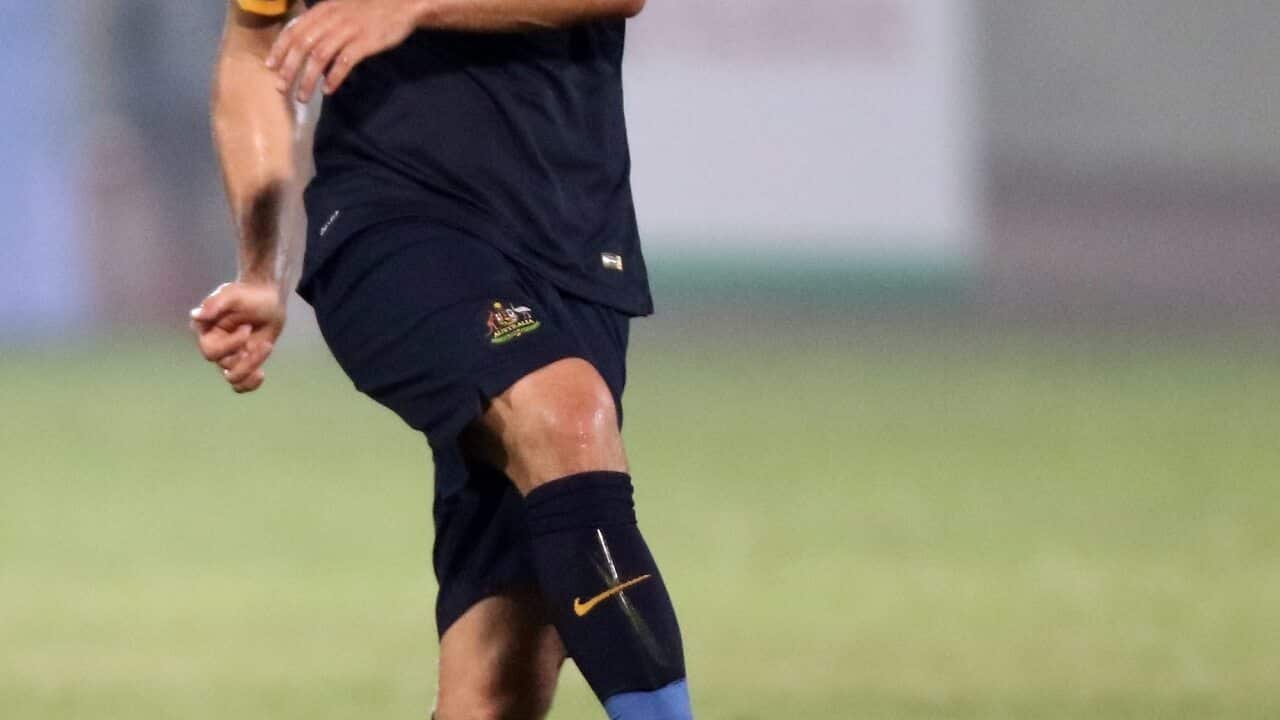 Wright in action for the Socceroos against Bangladesh last November Source: Getty Images

The Preston North End defender has barely put a foot wrong in the past three Socceroos internationals – the FIFA World Cup qualifiers against Jordan, Kyrgyzstan and Bangladesh – as he parlays his resolute and robust displays for his promotion-hunting Championship into convincing performances for his country.

Advertisement
With Spiranovic injured, eight-times capped Wright is likely to partner China-based Sainsbury against Tajikistan at Adelaide Oval and the Group B decider against Jordan on Tuesday night.

Wright's 33 club appearances in all competitions this season is the highest of any of Australia’s overseas brigade.

“Playing a lot of games is obviously what you want to be doing, and I am at a club that that has been doing well and is in with a chance of the play-offs,” Wright said, as Preston make a late charge up the table to sit just six points off the top six.

"It's always been about trying to get better each season and never standing still and hopefully I've been doing that.

“Getting promoted last year was a step up (Preston beat Swindon in the League One play-off final at Wembley) and it’s a credit to our side that we’re on a bit if a run right now."

But it's the Socceroos that have put Wright in the right frame of mind to kick on.

“Playing for Australia has really helped me also – there’s not much that can beat playing for your country," he said.

"With these games against Tajikistan and Jordan we have a great opportunity to move on to the next stage (of qualifying for Russia 2018).

“Losing to Jordan (2-0 in October in Amman) wasn't nice for us and we weren't happy with ourselves and we’ll obviously want to put that right when we meet.

“They are not a bad team at all, and we weren’t at our best that night. First we must get past Tajikistan and that’s no easy task.

“But we always have that confidence about us playing at home in front of our fans, and if we perform as we can we know we can get the job done.”

Wright reckons whoever starts in defence for the Socceroos against Tajikistan will be more than worthy of a spot, with Josh Risdon and Jason Geria vying for the right-back spot and Liverpool’s Brad Smith and Rosenborg’s Alex Gersbach battling it out for the left-back role.

“There are a few new faces, and that’s exciting for the national team,” he said. “Ange has never been afraid to give young players their chance and he’s done it again with this squad.

“These are doing well at club level and have been rewarded. You look at Brad Smith – he’s done really well in the cup competitions for Liverpool this season and he’s definitely get something about him.

“He’s a good player and good lad. We actually made our debuts together (in London) against Saudi Arabia (in 2014) and he’s got a lot of pace about him and a good cross too."

Wright, who played alongside Risdon in the Perth Glory youngster's debut international against Bangladesh last November, is less familiar with former Sydney FC speedster Gersbach, who has already forced his way into the first team with Norwegian champions Rosenborg.

“I know of him course and I’ve heard good things and I look forward to seeing what he’s about. He’s obviously earned his spot like all the lads in the squad,” Wright said.

“He's got experience and pedigree and I am sure he'll get them well organised and they will have a threat about them," Wright said.

“But we will concentrate on ourselves and we have to make sure we perform against Tajikistan first.”