It was a difference in approach that netted Egan Bernal (INEOS Grenadiers) a less severe penalty than on Stage 17 as Simon Yates (Team BikeExchange) piled on the pressure again at the Giro d'Italia. 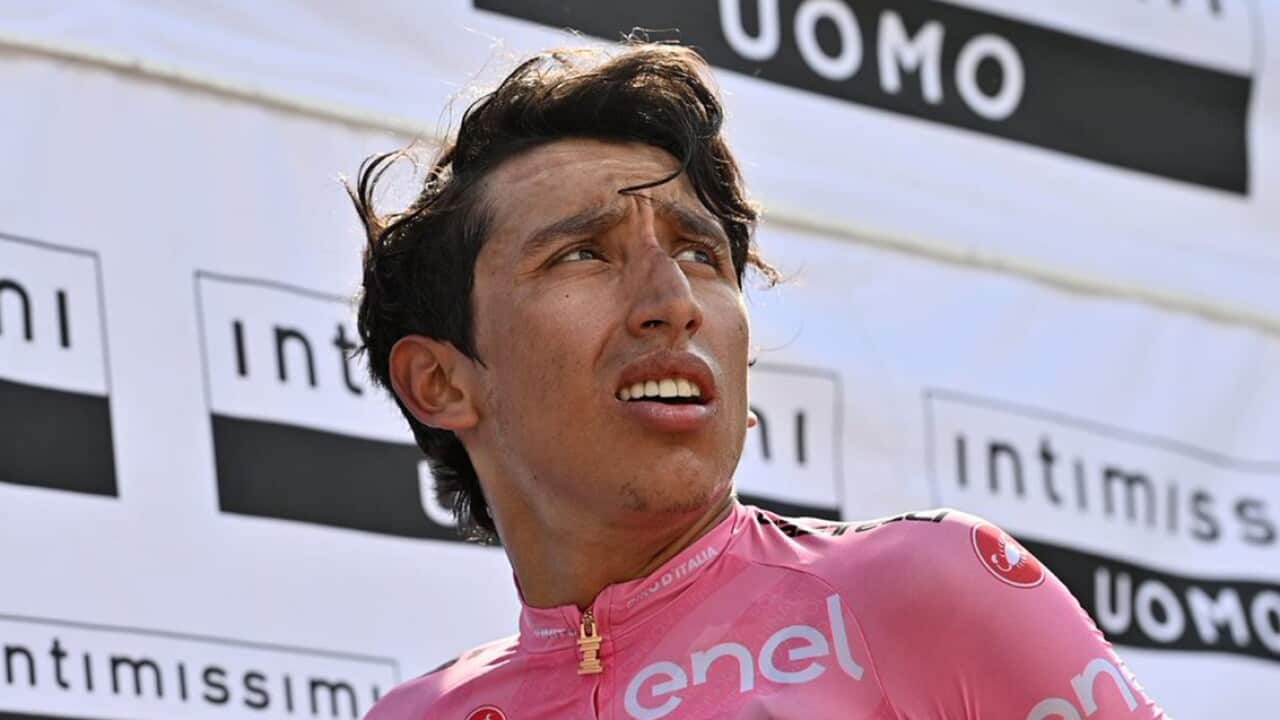 Egan Bernal hangs onto his lead at the Giro d'Italia after Stage 19 Source: RCS

Yates attacked with 6.4 kilometres remaining on the climb of Alpe di Mera, jumping clear for the stage win and the chance to take back another big chunk of time after his success on Stage 17 and the Sega di Ala, where he netted a 53 second swing on Egan Bernal.

On that day, a similar effort from Yates had seen Bernal immediately move to follow the British rider's attack. The pink, who had seemed invincible to that point, showed his first sign of weakness after committing just a bit too hard, blowing up and having to be coaxed up the climb by Dani Martinez, also relying on an unlikely ally in closest rival on the general classification Damiano Caruso (Bahrain Victorious).

This time when Yates went, Bernal stayed in the wheels of his teammates with first Jonathan Castroviejo and then Martinez emptying themselves with a strong tempo that swept the other attackers and even pegged back the advantage of Yates, which ballooned out dramatically to 35 seconds shortly after his attack. Despite the steadily increasing lead to the Team BikeExchange rider, Bernal stayed cool.

Advertisement
"It's difficult when they attack and straightaway they take 10, 20, 30 seconds in a short space of time,' said Bernal. "But I wasn't going slowly, and I knew they had to have sore legs in front and they would have to recover a bit.

"When I need to go from a long way out and when I have the legs, I try to do it. But in this moment, I know there's a rider who is stronger than me, and that's Yates."

Bernal waited until Martinez had delivered his final pedal stroke in support before launching his own attack with 2.3 kilometres to go, with the lead down to just 18 seconds for Yates. He dropped most of his rivals who had been following the pace, crucially including Caruso, his closest rival for pink.

Joao Almeida (Deceuninck-QuickStep) was able to follow, he latched onto Bernal's wheel and then dropped the Colombian in the final surge to the line with the hope of catching Yates for the stage win, also with the intent of improving his eighth position on the general classification. Bernal came over the line 28 seconds behind Yates, with the time bonuses on the line meaning the British rider shaved 34 seconds off his pre-stage deficit to the race lead.

"I did drop off a bit at the end, it was a very fast climb," said Bernal of the final few hundred metres. "Maybe I could have done it five to ten seconds quicker, but that effort might have put me into difficulty when I didn't need to do it.

"In the end, I preferred not to go flat out in the last few hundred metres, because I know I have a nice advantage, and I want to come to the final time trial with some strength left. That will be a head-to-head battle, alone against the wind."

Before the time trial, there's another day in the high mountains, the 164 kilometre stage from Verbania to Valle Spluga-Alpe Motta. The Alpe Motta is as severe a finishing climb as the Alpe di Mera, it's 7.3 kilometres long and averages 7.6 per cent, but the total climbing on the day exceeds 4,200 metres and could prove more likely to crack Bernal if he's lacking any form.

The Colombian appeared to acknowledge that risk, as he spoke of not losing much time, whereas previously the talk was always of taking more and more to add to his lead.

"Now I have to manage the advantage that I built up by attacking earlier on," said Bernal. "There's the work of a whole team behind this jersey, and I don't want to do something wrong and lose it. I want to ride with my head to try to bring this jersey to Milan."

The Giro d'Italia to this point hasn't gone exactly the way Bernal had thought coming into the race, but despite recent scares, he's still in a commanding position to take the overall win in Milan.

"Before the start, I thought I might lose a little bit early on and I thought I'd be trying to gain time at this point. Instead, it's been the complete opposite," Bernal laughed. "At the start I was good, and without going crazy, I managed to gain a bit here and there. The gravel stage was actually the first day I was planning to start trying to make gains, but I'd already gained quite a bit already.

The Giro d'Italia continues with another day in the high mountains for Stage 20 as the peloton tackles three Category 1 climbs in the finale of the stage for over 4,200 climbing metres total. Watch the racing from 2010 AEST on SBS OnDemand, with SBS VICELAND coverage starting at 2120.