Richie Porte has defended the riding style of INEOS Grenadiers at the 2022 Giro d’Italia, saying, "it’s better to be dishing it out instead of taking it". 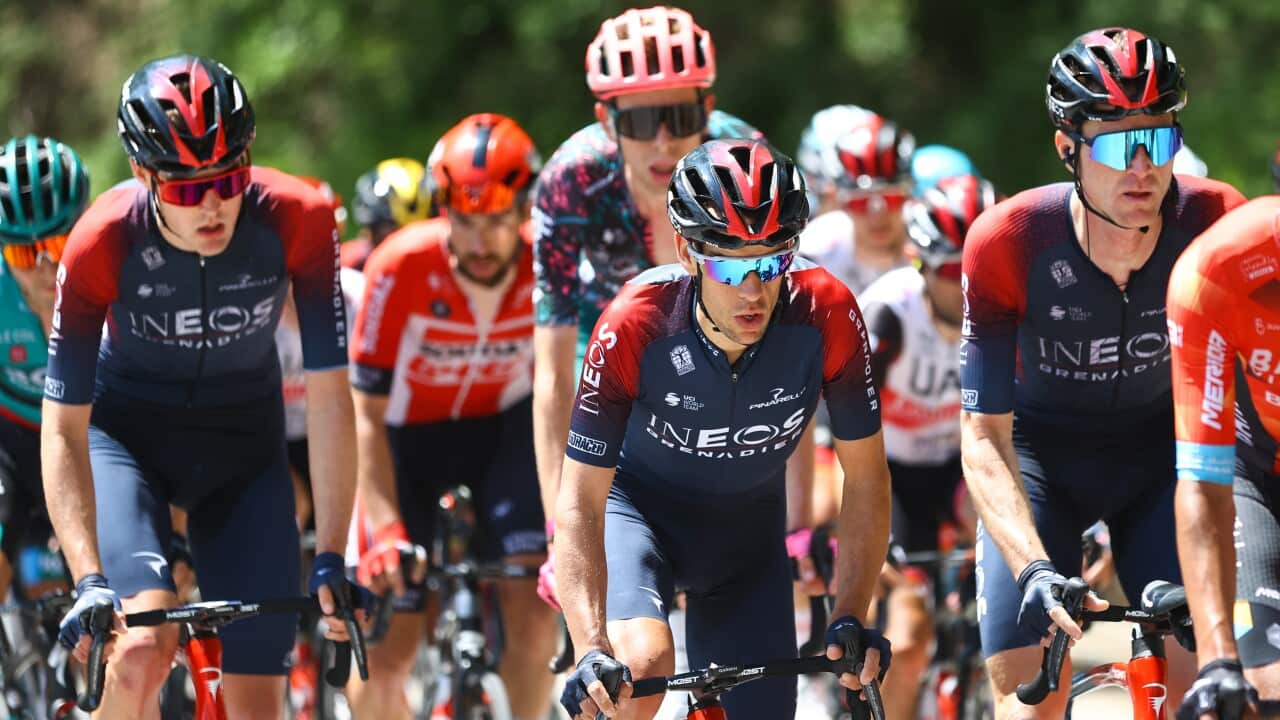 INEOS Grenadiers have gone away from the ‘mountain train' tactics that were so effective in securing Tour de France wins for Bradley Wiggins, Geraint Thomas and Chris Froome, with a more attacking style that has relied on less control over the peloton.

That has also been mixed with the emergence of Jumbo-Visma as a dominant team and Tadej Pogačar as a star of the sport, meaning that INEOS are racing from behind more often than previously. The more attacking style has been welcomed by fans worldwide, with previous iterations of the team being unpopular because of their original ‘boring’ manner of racing.
Watch on SBS On Demand
Stage replay: Stage 7 - Giro d'Italia 2022
Highlights show: Stage 7 - Giro d'Italia 2022
Advertisement
The train of climbers was again on display at the Giro overnight, with INEOS lining up to keep the breakaway within reach and test the other contenders who might challenge leader Richard Carapaz.

Another Richard, Australian Richie Porte, is racing his final Grand Tour and defended the tactics in a blog after Stage 7
on Velonews.

“I’ve seen a few bits and pieces here and there about us riding like the old Team Sky train,” Porte said.

“To be fair: we’ve been tactical with our approach and put on a bit of pressure added up for our rivals. That’s why we’ve done it.

“We’ve been trying to just put a bit of fatigue into the bunch at times, and to be honest, if we didn’t do that, then someone else and their team would. Sometimes it’s better to be dishing it out instead of taking it.”
Porte also evaluated the upcoming Stage 9 summit finish atop the Blockhaus and provided some insight into his role within the team, which had nominated Carapaz as the leader, without saying whether Porte would be able to pursue his own ambitions.

“Blockhaus is going to be a super important day,” said Porte. “From what I’ve seen, Yates, Bardet, Landa, and Carapaz are all going well. They all like to be aggressive, so it could be a really explosive stage. It will be hard before we even get to that climb though, so it might be a bit of a death march for those final kilometres.

“My job will be to support Carapaz, and I’m really excited about that. I’m enjoying riding for him because he just appreciates it so much.”

It was a departure from the avoidance of leadership questions around the squad, exemplified when SBS contributor John Trevorrow caught up with Porte ahead of the start of the Mount Etna stage and asked what his role for the Giro was.
“My role here is to try to enjoy it to be honest, it’s not always the easiest sport to enjoy,” said Porte. “In a few weeks, when the race is done, it will be nice to have looked back and have enjoyed my race… Didn’t really answer your question there!”

Porte did go on to work on the front of a reduced group of elite climbers on that stage, with Carapaz looking to be aggressive and take time on his rivals.

Porte currently sits ninth overall, 2’04" behind race leader Juan Pedro Lopez (Trek-Segafredo), with Carapaz a further two seconds back in 11th.
READ MORE
How to watch the 2022 Giro d'Italia LIVE on SBS
Giro d'Italia 2022: Stage-by-Stage
The Giro d’Italia continues with Stage 8, a route that starts and finishes in Napoli with some climbs featured on a circuit that will be a testing one for sprinters and puncheurs. Watch from 9.25pm (AEST) on SBS On Demand, or tune in when the SBS broadcast starts at 11pm. WA viewers can watch via SBS VICELAND from 9pm (AWST).
SHARE
Watch the FIFA World Cup, Tour de France, Giro d’Italia, Vuelta a España, Dakar Rally, World Athletics / ISU Championships (and more) via SBS On Demand – your free live streaming and catch-up service.
Watch now