'Santa' gives the gift of knowledge to Wanderers teammates

“Santa” has given rookie striker Lachlan Scott an early Christmas present at Western Sydney Wanderers – the gift of knowledge. 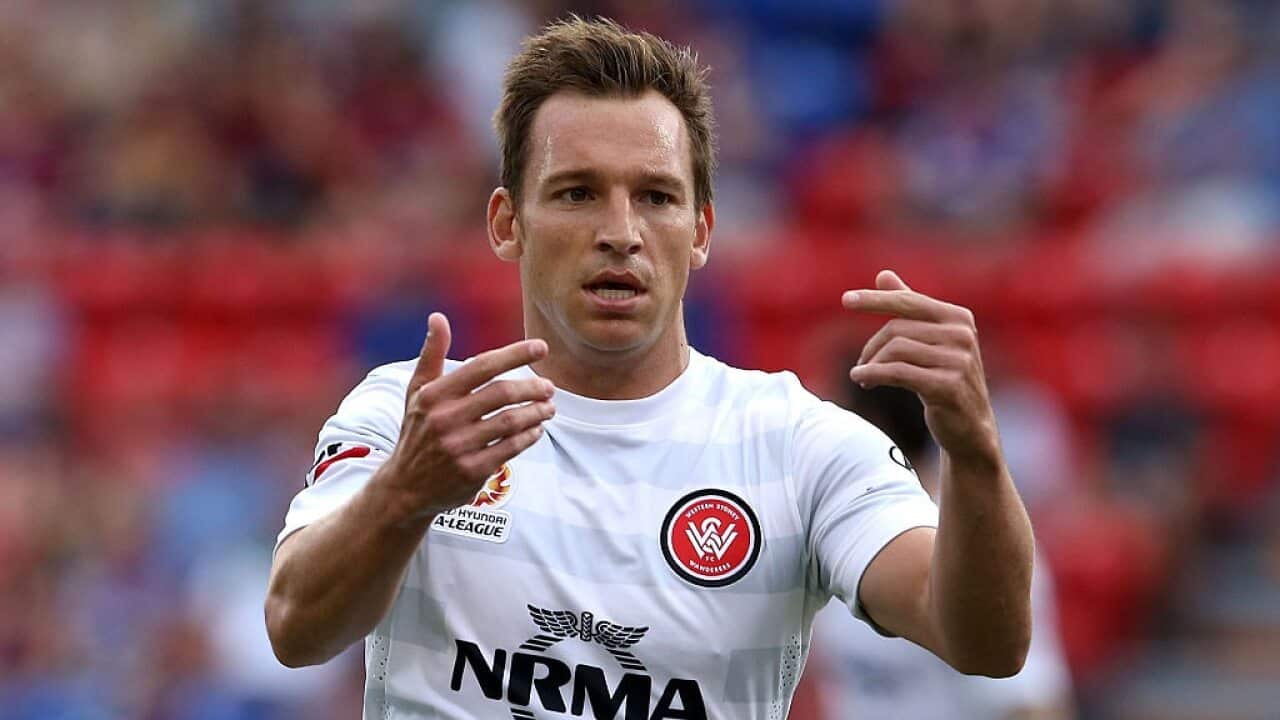 Scott, 19, told The World Game veteran striker Brendon Santalab had met with him away from the training ground to give him priceless advice based on his experience of 16 years in senior football, playing in Australia and overseas.

“I talked to ‘Santa’ the other day,” Scott said. “He invited me, which was nice. He said ‘come and we’ll get a coffee and talk’, so we did. We went to a cafe after training and he talked to me about how to be professional and how to improve yourself and it was very good of him.

“He gave me some really good advice. One of the things he said was how important it was to always be ready. He was talking about whether you know you’re starting or you’re coming off the bench, which he did a lot last season and scored a lot of goals doing.”

Advertisement
It is not always the case that a senior player will want to go out of his way to help a young player who might eventually be competing with him for the same position. But obviously Santalab is about sharing information.

“It’s good to have someone who wants to help you and goes out of their way to help you,” Scott said. “I got a lot out of it. He told me how he plays and what works for him and what he thinks my strengths are and what I need to work on.

“And he was pretty spot-on with everything he said, so it was really beneficial. It confirmed a few things to me that I thought about what I was doing.

“He’s very thorough in the way he prepares. He’s such a professional and such a nice guy and I’m glad to know that support will continue from him.”

Santalab, 33, was the leading goal-scorer for Wanderers last season, with 11.

It remains to be seen whether Wanderers make another marquee striker signing heading into this season, after Federico Piovaccari didn’t work out for them last season, but Santalab will again be an important player for them regardles, whether he is starting, as he did in the latter stages of last season, or coming off the bench.

Scott, meanwhile, is one of the club’s big hopes for the future after he and fellow former youth team player, midfielder Mario Shabow, were added to the senior squad in May.

Asked what advice coach Tony Popovic had given him so far, Scott replied: “When he told me I was in the squad he kept it short and sweet. He said there was a lot of improving to do and if I put a lot of commitment towards my football then we could go places together.

“Since then, at training, he has given me some key advice about moving my feet and stuff, body positioning - it’s all about helping me keep the ball and being as effective as possible with my use of the ball. They’re good tips.”

Scott said he had always played as a striker, apart from one season on the wing in junior football, and that he was essentially a finisher.

“I like to play forward, so I guess you could say I’m probably a bit of a poacher, popping up at the right time to score goals,” he said. “I prefer the guys behind me to be knocking the ball in front of me, into my path, rather than to my feet with my back to goal.

“I’m not too bad with my head, I’ve scored a few that way, but I need a bit of work. It’s definitely an area in which I can improve. I can score with both feet, but predominantly the right foot.”

Scott has been compared to Tottenham Hotspur and England forward Harry Kane, although mostly because of their similar looks at this stage.

“A couple of people said ‘oh, you look like Harry Kane’ and then it got around,” he said.

But have they started calling him Harry?

Scott, having seen how Popovic operates, is well aware he could be used in roles other than as a number nine.

“He hasn’t said anything to me about that. We’re just training at the moment,” Scott said. “But he has moved a few players around, like ‘Bridgey’ (Mark Bridge) playing striker and left wing. I’m happy to play anywhere if it gets me on the field.”

Scott said he was on a one-year deal at Wanderers.

“I’ve got a massive amount to play for this season,” he said. “I’m playing for my future at the club, but I like that pressure. I’m used to it as a striker. It’s a good thing because it pushes you - in the big games you’ve got to lift.

“The club is going to have a very busy schedule this season, so my aim is to get as many minutes as possible, help Wanderers do well and score a few goals.”