The equation is simple for Barcelona and Real Madrid

With the title on the line, Barcelona and Real Madrid will not allow their focus to drift to each other's matches on the final weekend of the Primera Division season. 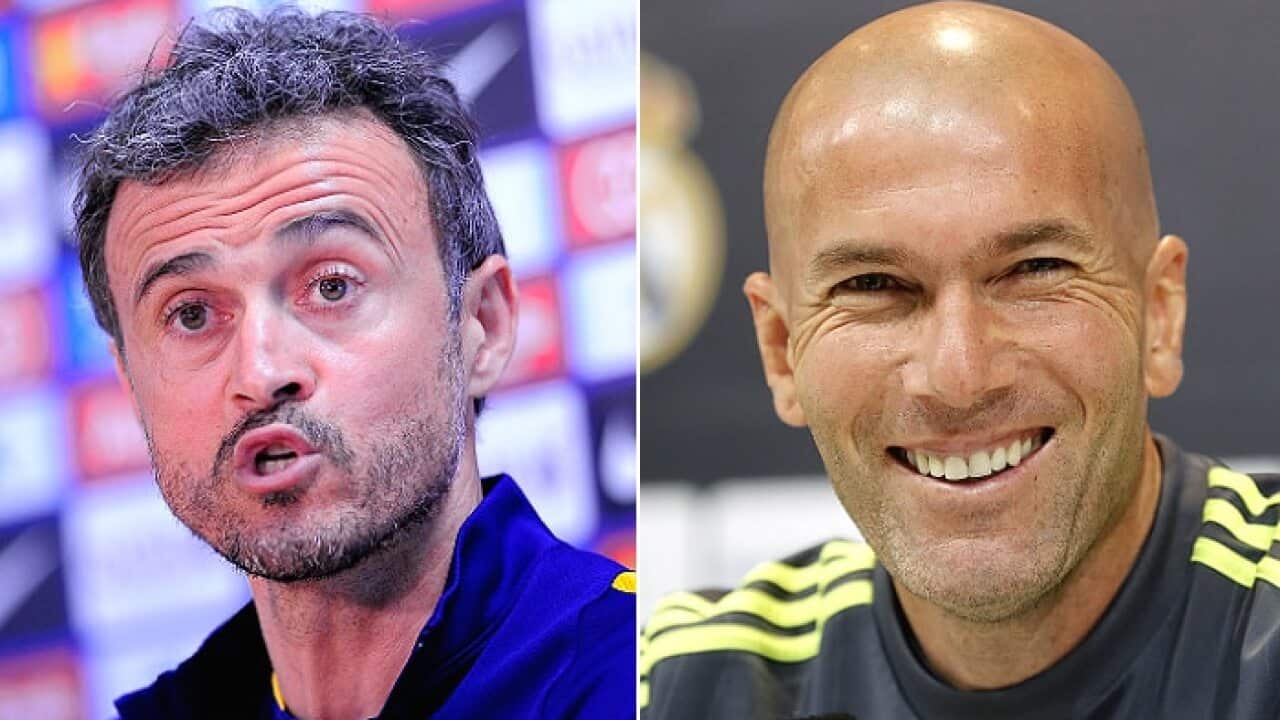 Barca hold a one-point lead over Madrid ahead of their respective away games against Granada and Deportivo La Coruna.

And coach Luis Enrique told the club's website: "We are only playing one game. If we don't win it, then we'll have a look at what has happened in the other game.

"I won't be taking any interest in it until the 95th minute. I get the feeling that we'll only win the league if we beat Granada."

Madrid coach Zinedine Zidane said similarly on his team's site: "We don't depend on ourselves, but we don't have to think about the other game, just about our game and winning. Afterwards we'll see what happens.

"I'm not going to focus on what others do. I can talk about what we're going to do. We have to play our best game to get the three points."

Both teams still have other silverware to play for, with Barca in the Copa del Rey final against Sevilla next weekend while Madrid face city rivals Atletico in the UEFA Champions League final.

But Luis Enrique said: "For the time being, the game with Sevilla doesn't exist in my mind.

"We are looking to win the most difficult league in Europe. That is a big enough motivation for my players."

Zidane admits he has 'dreamt' of winning trophies with Madrid but admits his future in the role is on the line.

"I don't know if I have earned the opportunity to continue," he said. "I haven't won anything to make me think that I can stay on. We have two finals to play."

Both the title contenders play on Sunday morning (AEST), with Atletico in action two-and-a-half hours later and looking to pounce for second place should their city rivals drop points.

Atleti's opponents, Celta Vigo, will contest the UEFA Europa League next season but are battling with Athletic Bilbao for automatic qualification to the group stage - Bilbao face this season's finalists Sevilla at the same time.

The following day the attention shifts to the relegation battle where two of Rayo Vallecano, Sporting Gijon and Getafe will drop into the Segunda Division.

Rayo go into their match against already-relegated Levante a point behind both of their rivals but with a superior head-to-head record. A draw would thus be enough for them should both Getafe and Sporting lose to Real Betis and Villarreal respectively, which would leave all three teams level on points.

Rayo were forced to deny allegations in the build-up to the game of match-fixing in last week's 2-1 defeat to Real Sociedad.

And the same statement, issued at a press conference on Friday featuring their whole squad, read: "On Sunday we have a hugely important game at Estadio de Vallecas, in which we maintain hope that we will remain in the Primera Division for next season."

Sporting are on the wrong end of the head-to-head calculations against either or both of their rivals and coach Abelardo told the club's website: "It will be difficult because we do not depend only on ourselves, but we must go for it. The team is ready."

Getafe coach Juan Esnaider told his club's site: "We are obliged to win. We have the same preparation and believe that we can win the game.

"The team is fine. We are counting on winning."

Malaga host Las Palmas and Espanyol face Eibar in the day's other games.