Wanderers - from Ono to 'Pio', via AFC Champions League glory

They celebrated an Ono and cast aside a 'Pio'. In-between, they became the champion club of Asia, but they're still searching for their first A-League championship. Will it finally come against Adelaide United at Adelaide Oval on Sunday? 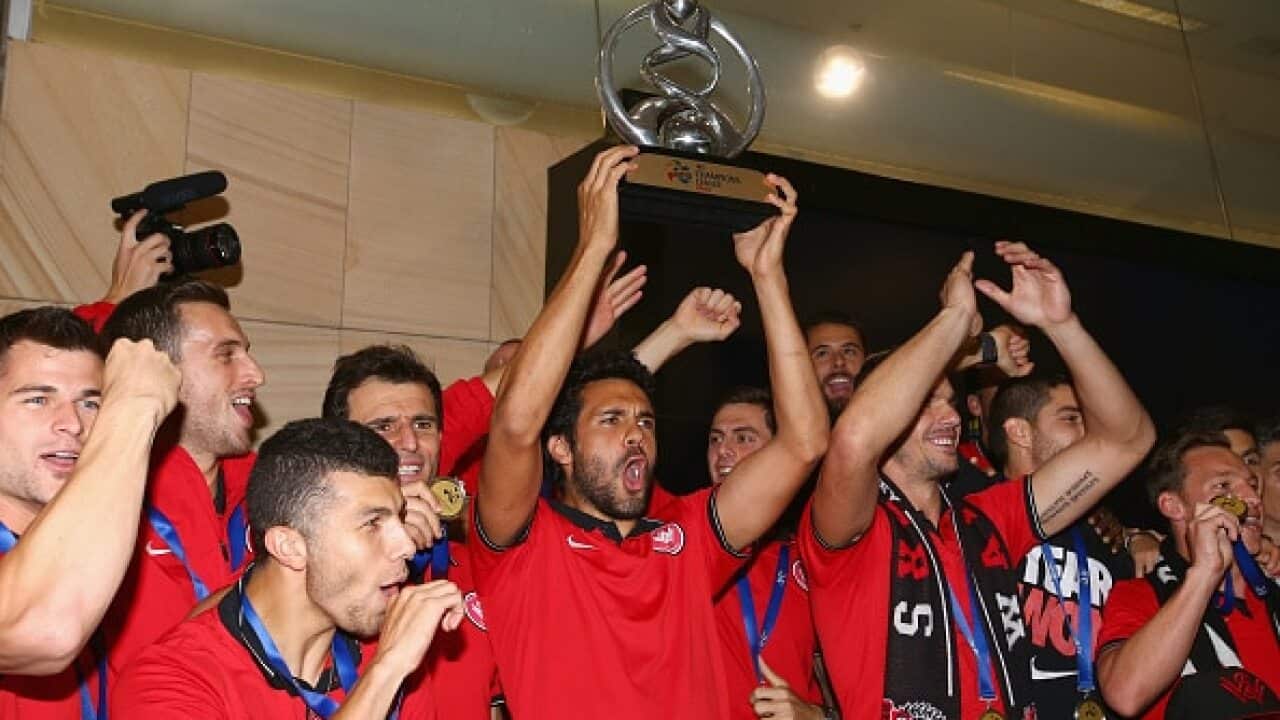 In the final part of a series on the two clubs who will do battle in the grand final, The World Game looks back at some of the most memorable - and dramatic - moments in Western Sydney's history.

Wanderers, led by coach Tony Popovic, did a marvellous job in recruitment for their first season in the A-League, 2012-2013, and perhaps the best decision they made was to sign former Japanese international Shinji Ono as a marquee player.

Ono gave a hard-working team that was big on defence their touch of class and he was a magnet for fans. He captured the hearts and minds  of Wanderers supporters with his tremendous skill, quality playmaking and some fabulous individual goals.

From the day the club was formed by FFA to fill the hole left after Gold Coast United's licence was revoked, the Wanderers had barely six months to pull a squad together and be ready for the start of the season.

Aaron Mooy was in there as well, returning to Australia from Scottish Premier League club St Mirren to be one of Western Sydney's first signings. Mooy was used mainly as a defensive midfielder, with Ono preferred in the main creative role.

There was no thought at Wanderers of just easing into the competition over the club's first couple of seasons. They wanted to be highly competitive from the start.

Wanderers won silverware in year one of their existence, finishing first past the post in the regular season to take the Premier's Plate and also qualify for the 2014 AFC Champions League. They went on to play in the grand final, but lost 2-0 to Central Coast Mariners at Allianz Stadium.

In their second year, they missed out on the plate to Brisbane, but qualified for the grand final against Roar.

They looked like coming away from Suncorp Stadium with a famous victory when central defender Matthew Spiranovic's 56th-minute goal was still the only one on the board after 80 minutes, but it wasn't to be.

Besart Berisha equalised in the 86th minute, forcing extra time, and the "Slippery Fish", Henrique, scored the winner for  Roar in the 108th.

Adelaide United had become the first Australian club to qualify for the final of the AFC Champions League, in 2008, but they were clobbered 5-0 on aggregate by Japan's Gamba Osaka in the two-legged final.

Wanderers became the first Australian club to take the ultimate step to Asian Glory, winning their two-legged final 1-0 on aggregate against Saudi Arabian club Al-Hilal in 2014.

Striker Tomi Juric scored in the 64th minute of the first leg, at Pirtek Stadium, and Wanderers held out for a scoreless draw in front of a crowd of 63,763 in the return leg at King Fahd International Stadium, Riyadh.

The second leg featured a stunning reflex save by Covic in the 85th minute off a shot from 10 metres out by Yasser Al-Qahtani. Covic reacted brilliantly to get his right hand on the ball and palm it wide of the post.

It was no surprise when Covic, who had been excellent throughout Western Sydney's campaign, was named player of the tournament.

The season from hell

Wanderers never really had a chance in  season 2014-2015. Circumstances conspired against the club to make their A-League campaign virtually impossible.

First, they were still on the way to winning the Champions League when the season began, and that meant domestic games being either deferred or the team having to back up quickly, including soon after long trips to Asia and back.

The one-month break in January for the Asian Cup compacted the A-League season even further for Wanderers, and then their campaign in the 2015 Champions League began in February. So, more games and more quick back-ups.

The players were exhausted, but to their credit they still found enough energy to at least narrowly avoid the wooden spoon and finish ninth.

After all of that, Wanderers only just missed out on advancing to the knockout stage of the ACL. They finished third in their group - two points behind Guangzhou Evergrande and one behind FC Seoul.

The cleanout and the recovery

Popovic made massive changes to his squad at the end of the 2014-2015 season and among the players he cut was Wanderers hero Covic.

Whether that was the right decision or not is debatable, since veteran Covic went on to have a good season with Perth Glory, but one thing about Popovic is that he is not afraid to make the tough decisions.

Wanderers hung a lot of their hopes for this season on Italian marquee striker Federico Piovaccari, but it didn't work out and after he made come up with just 22 shots, five on target, and two goals in 12 games, Popovic dropped him midway through the campaign.

'Pio' continued at the club, but he hasn't been seen in a game since.

Popovic brought Mark Bridge in from the wing to striker, and he and Mitch Nichols, along with regular substitute Brendon Santalab, came up with enough goals to keep Wanderers at or near the top of the table.

When the goals started drying up towards the end of the regular season, Popovic made another key move, promoting striker Santalab, who had been dubbed "super-sub", into the starting side in round 26 and moving Bridge back to the wing.

Wanderers have won three games out of three since, with Santalab (five) and Romeo Castelen (four) scoring the vast majority of their 11 goals during that time.

Now, Wanderers are back for their third crack at trying to win a grand final and they will also return to Asia next season.

And the club is still only four years old.