Imagine, having this beautiful dream where everything seems possible and achievable.

All of sudden, something or someone hard lands you to the cold cruel reality. It has happened to all of us, but for a young couple in Melbourne, the rude awakening came in the form of an absolute financial and emotional gutting.

Maryanne Moutsakis and her fiancé Steven Ognjenovic were dreaming of owning their own land where they would build their future home. This dream was starting to take shape when in August of 2017 they purchased a plot in the Winning Post Estate in Officer, near Pakenham a south eastern suburb of Melbourne.

They were given exact plans, building schedules, council documents and the Vendor Statement. “Everything was above board after having our personal Conveyancer read over all of the documents”, says Maryanne Moutsakis.

They signed on the dotted line and paid the 10% percent deposit of $32,000 to the Winning Post Trust Fund. All their savings, and money gifts from their engagement went into this dream of owning their first family home. It proved to be a nightmare. 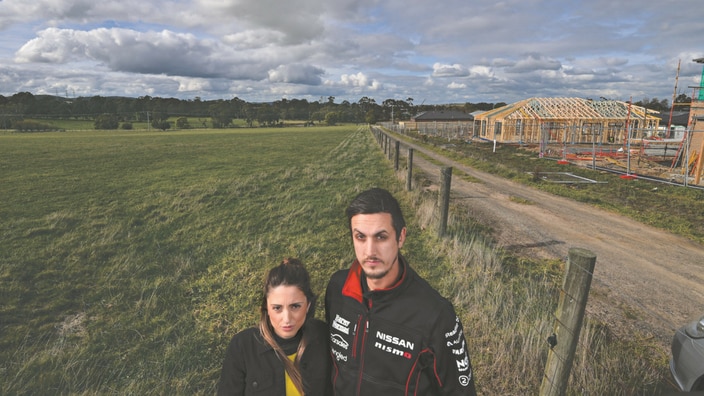 The Winning Post Estate in Officer, has gone into liquidation, although lawyers acting for the Winning Post reassured byers with letters that the winding up order has been “erroneously” obtained and would challenge the process in court.

SBS Greek, contacted PCI Liquidator that confirmed that the liquidation is continuing and to this day, no papers have been filled in court on behalf of the Winning Post Estate. Our calls for comment, to the Winning Post CEO Jason Dinh, and to a lawyer representing the company went unanswered.

Questions have been raised whether the couple’s funds were held in a trust account.

“We have received legal advice … they pretty much told us to move on”, says Maryanne Moutsakis. “I feel absolutely sick… now we don’t trust anyone and even we do manage to save enough money for another home deposit, we’re just scared to do a house and land package” she adds.

Listen to her heartbreaking story by pressing play into the embedded podcast in the main picture.