‘A woman of colour in steel-capped boots’: Zaneta Mascarenhas’s journey from engineer to MP 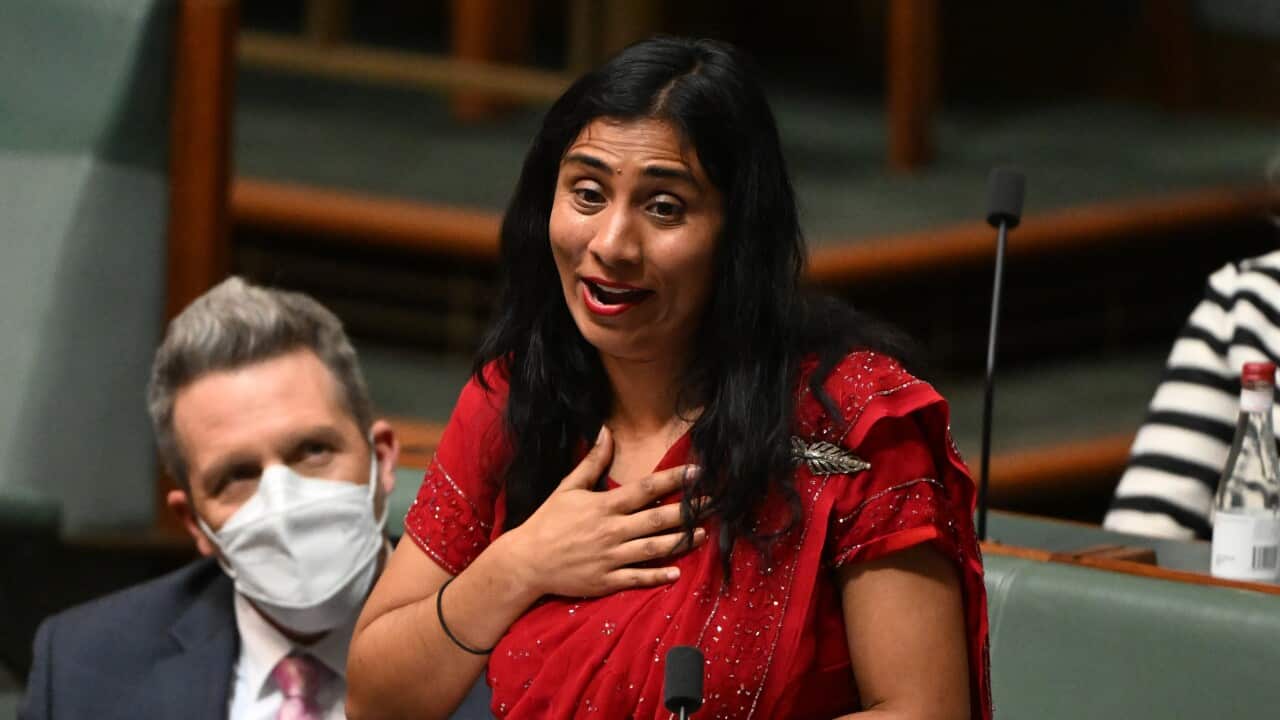 Labor member for Swan Zaneta Mascarenhas makes her first speech in the House of Representatives at Parliament House in Canberra.

Labor MP Zaneta Mascarenhas, who delivered her maiden speech to parliament recently, talks to SBS Hindi about her Indian heritage, climate change and leadership in the workplace.

Dressed in a vibrant red saree, Ms Mascarenhas used her maiden speech to praise the "most multicultural parliament we've had in history" but also said it should not be seen as a high-water mark.

Ms Mascarenhas, whose parents are of Indian origin, was one of a number of politicians with non-European backgrounds sworn in on Tuesday.
Advertisement
Speaking to SBS Hindi prior to her speech, she said her election win was "an incredible honour", but admitted she never imagined politics would be her path.

Ms Mascarenhas defeated Liberal Kristy McSweeney with a 12 per cent swing to become the first woman to win the Perth seat of Swan in its 101-year history.

“As an engineer and scientist there are skills that I have learned from a technical perspective but also the social skills of being a woman of colour, I am hoping both these things will help me in being a more effective politician,” she said.

Ms Mascarenhas identifies as an Australian with a Goan-Indian heritage.

Both her parents were born in Goa, on the southwestern coast of India, albeit from different villages, and they grew up in Kenya before they migrated to Australia.

During her maiden speech, she said her "Australian story" would not have been possible if not for a federal Labor government as she shared her father’s experience.

When my dad went to the Australian embassy in Kenya, they said to him ‘you have the right skills but the wrong colour’.

"That’s because we still had the White Australia policy in place, but then Gough Whitlam dismantled the last part of that policy and that’s how my family could migrate to Australia,” she explained.

Ms Mascarenhas was born in Kalgoorlie and grew up in the small nickel mining town of Kambalda, a place she described as "incredibly multicultural".

Having moved to Australia, Ms Mascarenhas's parents wanted her and her sister Cleta to assimilate, so they did not practice their mother tongue, Konkani, with them.

As a result, Ms Mascarenhas claims she knows more Bangla than Konkani because she worked at the World Bank in Bangladesh for one year as part of an AusAid-funded Water and Sanitation Program.

She credits her love for colourful salwar kameezes (traditional tunic and pants outfits) and diverse food including biryani to her stint in the subcontinent.

Ms Mascarenhas, who has lived in Perth's East Victoria Park for eight years with her husband and two children, believes her strong connections to the community helped her win the election.

“I am a mum, I live in the community, I am connected to the community and I am also a person of colour and an engineer who started her career in steel-capped boots on a mine site, so I feel like people connected with different parts of my story and thought that I would be a stronger representative for them.”

She considers the cost of living to be the key issue facing her electorate.

“There has been no wage growth, so it’s been a tough time for the community, particularly in Western Australia where the cost has been higher than other states,” Ms Mascarenhas claimed.

As a climate change activist, Ms Mascarenhas said her focus has been on moral imperatives as much as incremental policy wins.

She also had much to say on the topic of Labor’s wish to make Australia a renewable superpower.

“I think that this is where our future lies and the truth is Australia is rich in so many things, including our natural resources whether that be sun, wind, geothermal or our critical minerals that can be used to actually build things. So, we've got to make sure that we get this right,“ she added.

She said it was interesting that during the energy crisis on the east coast the ACT managed to hedge some of the cost pressures by locking renewable energy into their grid. She feels this is something that will be part of Australia’s energy future.

“The price of gas has gone up, so it is really important that we integrate more renewables into our electricity mix. Australia becoming a renewable superpower is totally a part of that vision,” she declared.

Ms Mascarenhas is among a cast of diverse faces from Asian Australian backgrounds intent on overhauling Parliament House.

“The Australian public is voting for a parliament that looks like them. It is important that we see that our federal parliament is as diverse as the people of our wonderful country. And if I can inspire others to think about politics as a career then I am very happy to do that,” she said.

However, she is adamant more needs to be done.

“We actually need to see an increase [in diversity] for it to be even more reflective of our multicultural society,“ Ms Mascarenhas added.

She said that the world needs changemakers, and everyone in Australia has the ability to make positive change.

“I would have never imagined that I would have the opportunity to be a member of the Federal Parliament, we have a Prime Minister who grew up in social housing, so the thing that I like to think about Australia is that people can achieve those dreams,” she said.

One of the things that people have said to me is that politics is a blood sport and if I can make it as a woman working on a mine site then I can make it in federal parliament.

"It is really important that our new parliament is an inclusive workspace where everyone can be their best and bring their best to help our nation to create a better future,” Ms Mascarenhas said.

Listen to the podcast in English by clicking on the audio icon inside the picture at the top.

Are you displaying or hoisting the Indian flag at your home? Here's how to do it right