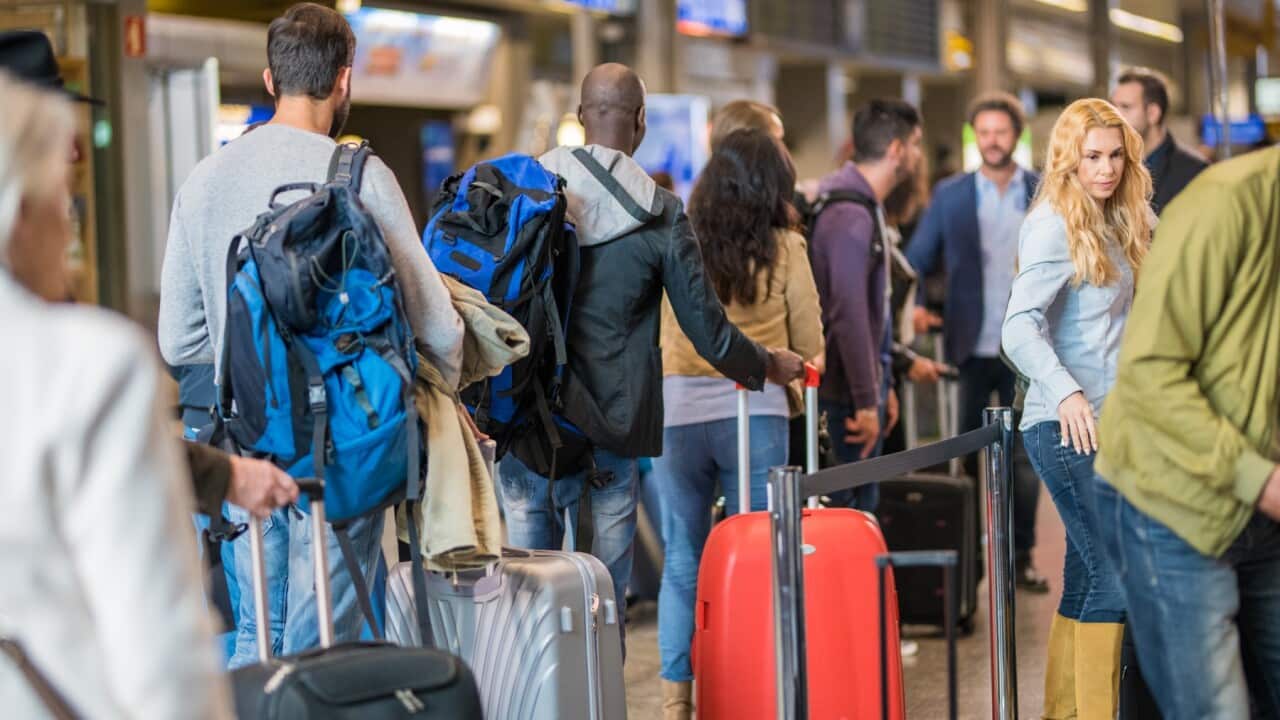 A key assumption that underpins Australia’s Budget released in Canberra on 11 May indicates that international borders will remain closed until mid-2022, leaving hundreds of thousands of temporary visa holders in a lurch.

Published 12 May 2021 at 6:09pm
By Avneet Arora, Ravdeep Singh
Source: SBS
For temporary migrant Divya Sharma, hopes of returning to Australia this year have been dashed by the Budget Outlook 2021-2022, that carries a grim message about the reopening of the country’s international borders for its non-citizens and non-permanent residents.

Advertisement
Left without a safety net

Ms Sharma travelled to India with her family for her husband’s eye surgery in March last year. She feels the government has left temporary migrants stuck outside the country without any safety net.

“I am on a 485 visa, which will expire soon, leaving us with no pathway to return. We have wasted a lot of time and were hoping for some reprieve in the Budget, but the government has left us high and dry,” the 28-year-old said.

Divya Sharma and Ravinder Sharma with their son. Source: Supplied by Ms Sharma

Ms Sharma is now keen to try her luck with Canada, which has announced plans to grant permanent residency to more than 90,000 international students.

“I have already wasted too much time waiting for the Australian government to reopen the borders. Now I am being forced to consider moving away from Australia – a country where my young family and I had already established our roots,” she adds.

Clarifying the government’s stance on the issue of international borders, Prime Minister Scott Morrison on 12 May said that they were not ready to put the health and safety of Australians in jeopardy at a time when the pandemic is spiralling in many parts of the world.

“Australia has been successful because we have a run a successful border control policy, and I’m not about to put that on risk at a time when COVID is now raging through the developing world,” he said in his address to the multicultural communities.

Prime Minister Scott Morrison with Treasurer Josh Frydenberg after the 2021-22 Budget at Parliament House in Canberra on 11 May. Source: AAP

Mr Morrison, however, reassured the government has not lost sight of the consequences of tight border measures on important economic cohorts, including skilled migrants and international students.

He assured the government is keen to take steps towards a gradual reopening of borders to support Australia’s economic recovery, but only when it is safe to do so.

“If behind secure borders, we can open our own economy more and more, and in critical areas, we have talked about students, but also in other forms of important labour that needs to be brought into the country to support our economy where we can do that safely well, we’ll continue to do, and we’ll continue to provide new opportunities to them,” the prime minister said.

He added that the Budget Outlook has made an assumption that borders will remain closed until mid-next year, but “it’s an assumption, not a policy.”

Abul Rizvi, former deputy secretary of the Department of Immigration, forewarned that many factors would determine whether the government will be able to lift the restrictions sooner than mid-2020.

“Whether the borders can be opened any earlier or not depends really entirely on the rollout of the vaccine and whether the government is able to find extra capacity in quarantine. At this stage, things aren’t looking all that promising on that front,” he told SBS Punjabi.

In the Budget, the government has indicated a “small-phased” return of students to Australia later this year but has ruled out a possibility of a large-scale return before mid-next year.

Sandeep Kaushik travelled to India in March last year to seek the comfort of his family home and recover from injuries that he had sustained in a road accident in Sydney that had brought his life to a halt and forced him to defer his undergraduate degree.

Sandeep Kaushik had travelled to India in March 2020. Source: Supplied by Mr Kaushik

The 28-year-old business student is now studying online from India but has lost all hope of returning to the life he left behind in Australia over a year ago.

He said if students from relatively safe countries such as Singapore and Japan haven’t had a chance to return, those stuck in India may not be in the queue for a long time to come given the current travel ban.

“If overseas students in countries where the pandemic is under control, have not been able to return, how can we expect that the government will let us return from India where COVID continues to wreak havoc,” asked Mr Kaushik, adding he has no desire left in him to return to Australia.

States need to step up

Mr Morrison said today the government is open to accepting viable proposals from universities and state governments to facilitate a phased return of overseas students, but to expect the federal government to lead the process is “unreasonable.”

“We have got state governments, particularly New South Wales and South Australia, who I think are very open to working with the sector to achieve that,” he said.

“The suggestion, though, that this will somehow be all done by the federal government, subsidised by taxpayers, I think is unreasonable. The universities have much to gain from doing this and I have always encouraged them to come forward and to put proposals that would enable them to see some students come into Australia,” Mr Morrison added.

'We have a timeline for return of students, but it's too far in the future'

Phil Honeywood, the Chief Executive of International Education Association of Australia, said a “small-phased return” means students who have to undergo practical training to get their degrees, will lose yet another year while waiting.

“This means that another full 12 months are being lost for students who are patiently waiting to return, particularly those who have to complete fieldwork to gain their Australian qualification. On the one hand, we now have an indicative date, on the other it's too far in the future for many of our students,” he added.

He indicated that states are working on their pilot plans to fly back students in small numbers, and the big news is expected to come out of New South Wales.

“We anticipate New South Wales will have a major announcement coming out shortly that will, at least, show that one state is willing to have a meaningful return of students,” Mr Honeywood concluded.