Marching to her own beat: Ankita making it as a dhol player in a man’s world 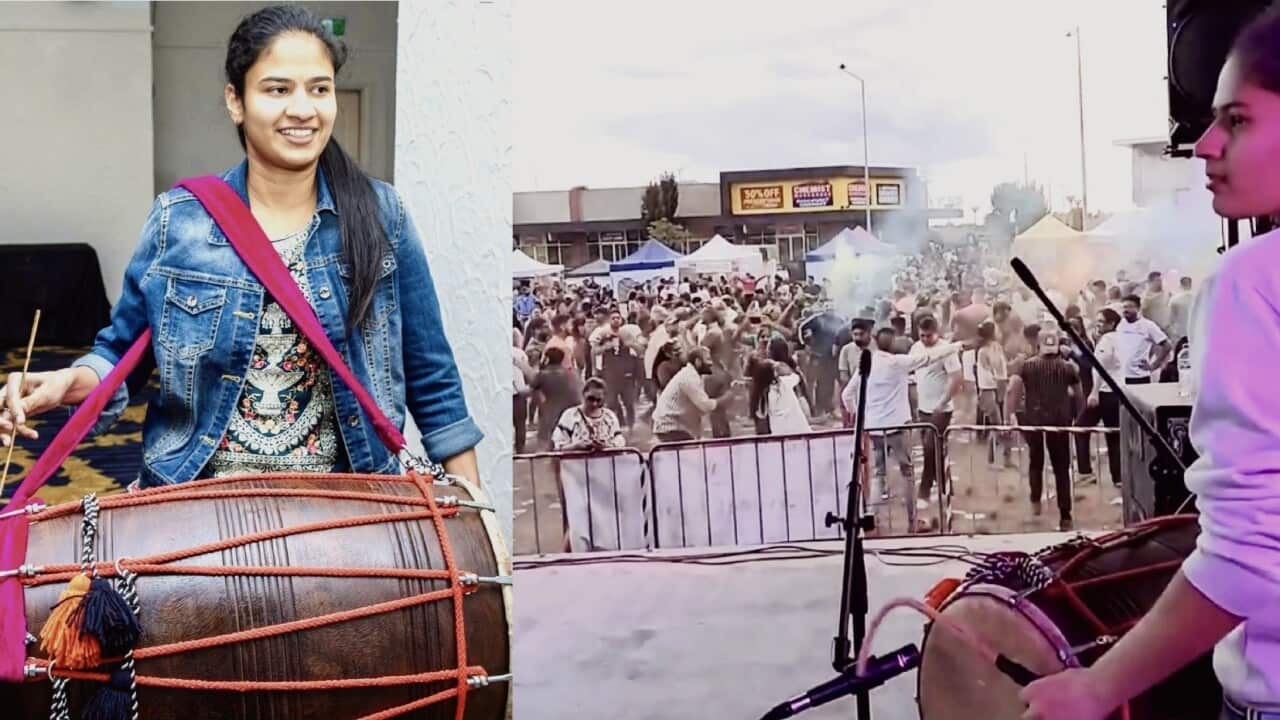 Growing up when many people said playing the dhol wasn’t for girls, Ankita Chopra always had her family’s encouragement. Now the Melbourne-based musician is drumming up attention.

The thunderous sound of the dhol, a double-headed drum, is synonymous with celebrations in Punjabi culture, whether it’s weddings or spiritual gatherings.

But, until very recently, the dhol had largely been seen as a man's instrument.

Twenty-year-old Ms Chopra is helping to change that perception – one beat at a time.

Her playing has quickly sent ripples through Australia's Punjabi music circles and she has become known for whipping her audience into a frenzy at events like those held for Holi and Teeyan festivals.

Ms Chopra tells SBS Punjabi that as a child she was fascinated by the instrument.

At age five, she first picked up a dhol, and she has not looked back since.

"It has been 15 years since I started playing dhol. My family are regular visitors of Dera Baba Balak Nath Mandir in Jalandhar [in India's Punjab province], and I grew up hearing the sound of dhol at satsang [religious or spiritual congregations]," the 20-year-old says.

Ankita started playing Dhol at a very young age and credits her dad for igniting the passion for the percussion instrument. Source: Supplied by Ankita Chopra
Ms Chopra credits her family, especially her dad, with igniting her passion for music.

"At a time when many people weren't used to watching girls play the dhol, my family ensured I got all the training and support once they saw my inclination towards the instrument. Now playing the dhol is kind of natural to me, and it's my identity," she says.

"I never realised the seriousness of this art until I arrived in Australia," she says. "As soon as I started playing dhol at events, word spread through the community."

"People still haven't seen too many women playing live dhol, and initially, some people do give me the eye, but when they hear me play, they just get all their answers!," she says.

With many shows in Victoria and inter-state already behind her, Ms Chopra has a busy schedule planned for the rest of the year.

Given the heavy weight of the dhol, playing the instrument requires tremendous physical and mental strength.

"It has always been perceived that a dhol player must have 'manly' strength and musical ability, which is possibly the reason why people have their doubts when they see me as a girl playing professionally," Ms Chopra says.

"Playing dhol for hours at a stretch can result in hand blisters, but I've never stopped. I've even played with bandages on my hands," she adds.

Defying stereotypes with her dhol beats, Ms Chopra says, "Although women can have what they want these days, we still need to prove ourselves in whatever we do."

Ms Chopra's playing has seen her share the stage with some big-name Punjabi performers.

"The famous folk singer Sarbjit Cheema told me, 'You are the first female who has played live with a Punjabi singer'," she claims.

"It has been an honour to play live dhol with singers like Diljaan, Sarbjit Cheema and at various Indian events around Australia," she says.