Adani has won a crucial approval for managing groundwater that allows the company to begin building its controversial coal mine in central Queensland.

Adani has declared it's full steam ahead for its controversial mega coal mine after the Queensland government issued the final approval needed to begin construction.

Queensland's environment department has signed off on the plan to manage groundwater on and around Adani's Galilee Basin mine site.

Adani chief executive Lucas Dow was "really excited" they could now begin the two-year construction period for the mine and rail. 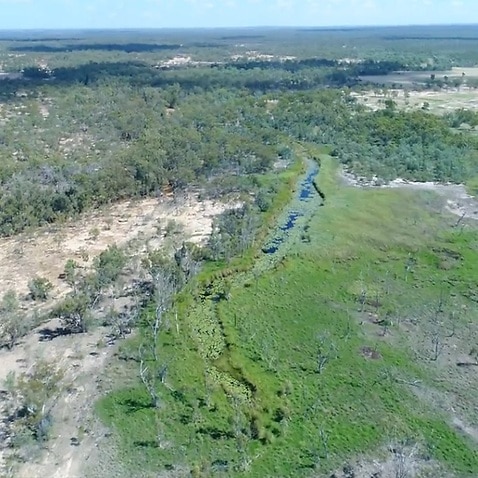 "You could be thinking from today, in two years' time, people should be expecting we have exported our first piece of coal," he told reporters in Brisbane.

While Adani can now construct the mine, it still faces more state and federal hurdles before it can actually dig out the coal.

The company needs federal approval for its plan to better understand groundwater use impact on the nearby Doongmabulla Springs before the first extraction of coal.

The Queensland environment department said Adani's most recent version of the groundwater plan, submitted a day ago, was robust and the result of the best available science.

It was satisfied Adani had established the main aquifer that feeds the ancient Doongmabulla Springs Complex, near the edge of the mining lease.

But the company must do more work to establish if any other aquifers feed the springs, which some water experts have warned could permanently dry out if the mine proceeds.

Adani must also ramp up water monitoring within the springs complex. And use a bore in a layer of claystone that separates the springs from the mine, so there's an early warning trigger for dangerous water-level drops.

Mine opponents have reacted with fury, declaring the fight against the mine is not over.

Greens Senator for Queensland Larissa Waters accused the state Labor government of caving in to pressure from the coal lobby and donors.

Tom Crothers, a former general manager for water allocation and planning in the Queensland government, accused Premier Annastacia Palaszczuk of pressuring bureaucrats to approve the plan.

Ms Palaszczuk stepped in last month, demanding approval deadlines be set after Labor was thumped at the federal election in Queensland electorates that want Adani's jobs.

"Science has been thrown in the bin for political expediency," said Mr Crothers, who worked in government for 35 years before leaving in 2011.

State Environment Minister Leeanne Enoch said the decision was made solely by her department and that cabinet members had nothing to do with it.

"It has been made by the regulator and is backed by expert advice," she said.

State Opposition leader Deb Frecklington labelled the decision a win for Queenslanders who need a job but says it's just the beginning.

She wants the Galilee Basin to be opened up to more projects but says she won't be softening the state's environmental laws to make the approvals process easier if elected next year.

"You can't just come into Queensland and start digging up coal, it is an extremely rigorous and difficult process as it should be," she said.

MPs say the requirements laid out by the department will reassure farmers and graziers who fear the mine's potential impact on water sources.

Some water experts claim Adani has grossly underestimated the mine's impacts on groundwater, and fear the effects of its permit to pump water out of the mine to allow for the safe extraction of coal.

Regional leaders were glad a decision had been finally made and were now waiting for Adani to follow through with jobs.