The Labor leader has delivered a speech on the importance of the US-Australia alliance.

Anthony Albanese has accused Prime Minister Scott Morrison of pandering too much to Donald Trump during his time as US president in his first major speech on foreign policy.

The Labor leader on Wednesday delivered the address at the University of Western Australia ahead of Joe Biden’s inauguration as president.

He hit out at Mr Morrison's handling the US-Australia alliance accusing him of cozying up too much to Mr Trump and criticised him for not directly condemning the outgoing president for inciting the Capitol riots.

In response, Mr Morrison has rejected the criticisms calling it "disappointing" that Mr Albanese has sought to politicise the alliance.

"Personal attacks are not foreign policies. If the leader of the opposition thinks sledging me is some sort of foreign policy, he just doesn't get it," he told reporters.

"I don't think the US-Australia relationship is conditional on the politics - it's not - it's bigger than that and it's disappointing [Mr Albanese] would want to drag something so important into petty political sledging."

Mr Albanese has said Mr Morrison went “too far” in seeking close ties with Mr Trump, in part due to “his affinity” for him and because of the “political constituency they share”.

He argued this approach has risked damaging the US-Australia relationship, including by neglecting to build stronger ties with Democrats.

“Unlike most world leaders, Scott Morrison refused to disavow President Trump’s incitement of the storming of the Capitol,” Mr Albanese said.

“He remains afraid of the far-right extremist fringe-dwellers who make up the bedrock of his personal support – and who he cultivates through the avatars of Trumpists and conspiracy theorists like Craig Kelly and George Christensen. "Let's call this what it was: Mr Morrison pandering to President Trump and those who follow him in Australia," he added.

Mr Morrison said he looked forward to a "very positive" relationship with President Biden once he is sworn into office at his inauguration on Thursday.

Mr Albanese's wide-ranging speech also touched on Mr Morrison's past criticism of multilateral institutions, Australia's cutting of $11.8 billion from the foreign aid budget and the government's policies on climate change.

But Mr Morrison - who has previously railed against "negative globalism" -  also rejected the idea his government was not committed to global institutions.

In his speech, Mr Albanese called for the Australian government to "come to the table on climate change" with the incoming Biden administration, that unlike Australia, has backed a net-zero emissions target by 2050.

The United States is set for a major policy shift on the issue as President-Elect Biden returns his country to the Paris Agreement.

“Scott Morrison’s stubborn resistance to joining the global consensus on climate change has led to his government now being totally isolated on the international stage – frozen in time while the world warms around them,” he said.

“We can expect Mr Morrison’s isolation to create tension in our alliance and damage our interests.”

Mr Morrison said the government would "meet and beat" its emission reduction targets agreed to under the global pact. 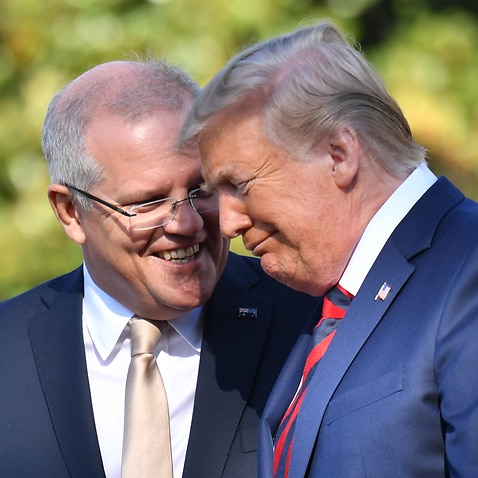 Mr Albanese has also called on the federal government to work closely with the Biden administration in the Indo-Pacific and make a stronger strategic effort in South East Asia.

“The arrival of the Biden administration presents an opportunity to expand alliance cooperation on the challenges before the world and our region,” he said.

In December, Mr Trump awarded Mr Morrison a prestigious US military honour in recognition of his “leadership in addressing global challenges and promoting collective security”.