While aged care residents were among the priority groups for boosters when the rollout launched in November, some who received their second dose eight months ago are yet to get their third. 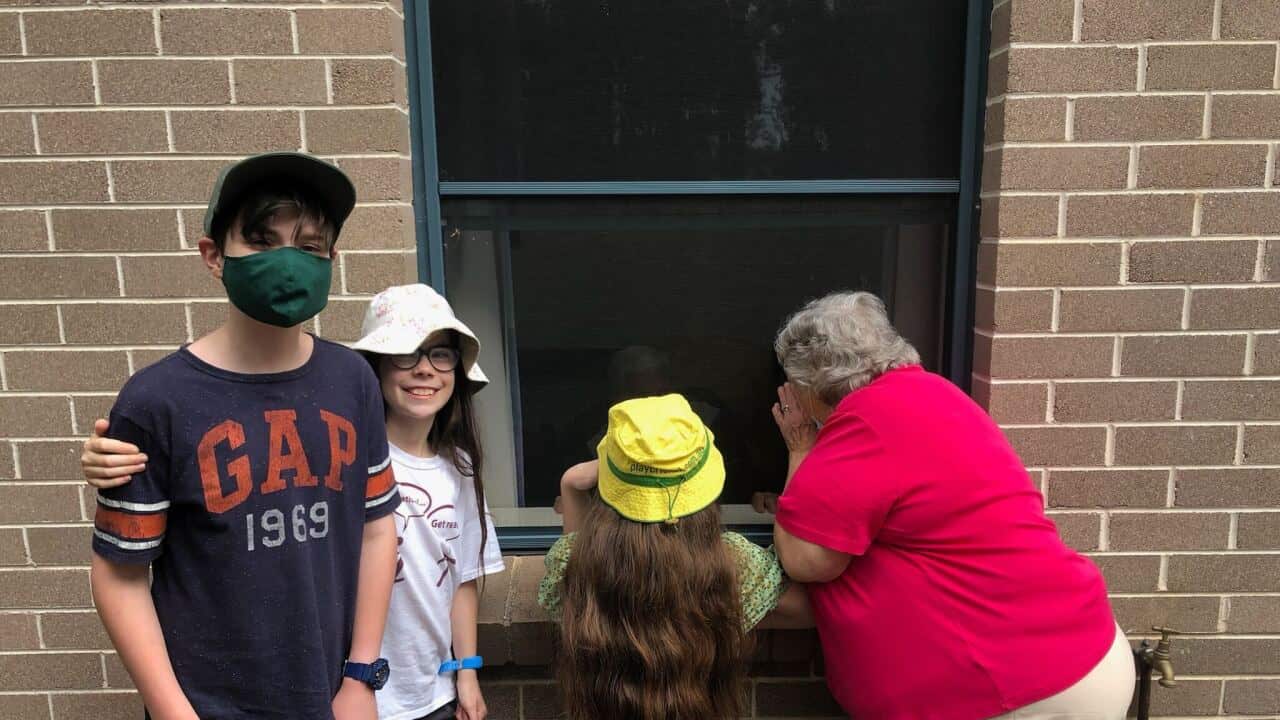 Melinda went to visit her father in the lead-up to Christmas, but she was forced to interact with him through the aged care facility's window. Source: Supplied/Melinda Holmes

Aged care residents in Australia are still waiting to receive their COVID-19 booster vaccines, amid concern about the spread of the Omicron variant and the efficiency of the federal government's rollout.

One of those aged care residents yet to get a booster is Melinda Holmes’ 84-year-old father, who has dementia and got his second jab eight months ago in April. His family has asked for his name not to be published.

He lives at an aged care facility in Sydney's west, which Ms Holmes said was put into lockdown on Boxing Day after a staff member tested positive for COVID-19.

Advertisement
Ms Holmes said she’s been seeking to understand why her father’s not been given his third jab and get clarity on exactly when that will be for weeks.

“Whenever I ask the nursing home about it, they say it's been postponed and postponed. Now they're saying sometime in January, but they don't know the date,” Ms Holmes said.

Melinda Holmes' father has not received a booster shot despite having his second dose eight months ago. Source: Lucy Murray/SBS News

“They say ‘Yes, the federal government's coming again. We've already signed the consent forms a couple of months ago’. But the nursing home told me that the date keeps being moved.

“I booked my father into a GP for 3 January, but now he's in lockdown, I [might not] be able to take him out”.

Ms Holmes’s brother was due to pick their father up to take him to a Christmas gathering this year, but a COVID-19 infection in the family scuppered those plans.

While some of the family visited him last week in the lead-up to Christmas, they were forced to interact through a window.

“That was only the second time he saw his grandchildren this year,” Ms Holmes said.

“My father’s spent two Christmases in the nursing home not allowed to leave. We've done all the right things and we still can't get the booster for him.”

Aged care residents were among the first groups to have access to booster shots when the rollout launched in November.

Ms Holmes said she was “shocked” it's taken this long for her father to get his booster and would not be surprised if there were many others in a similar situation.

“I’m angry … and I’m pretty sure that there [would be] a lot of nursing homes out there where the residents haven't had their booster and it's been a long time since they had their second jab,” she said.

“I don't understand why aged care facilities weren't getting their boosters on time because then they would have been well placed for the current Omicron outbreak.”

According to the latest government data, there were 385 active cases of COVID-19 in aged care residents and workers across Australia on 24 December, up from 213 on 17 December. There was a total of 105 active outbreaks, an increase from 54 a week earlier.

On Monday, NSW recorded its first known Omicron death – a man in his 80s who was a resident of the Uniting Lilian Wells aged care facility in North Parramatta, where he acquired the virus.

NSW Health Minister Brad Hazzard recently warned everyone in the state would likely get Omicron “at some point”.

Last week, it was announced the interval between people's second and booster vaccines would be reduced to four months on 4 January, and then to three months on 31 January, following advice from the Australian Technical Advisory Group on Immunisation (ATAGI).

The federal Department of Health did not answer questions about the number of booster doses administered to aged care residents and workers across the country, but a spokesperson said the cohort had been a “major priority” for the program.

“1,517 facilities across Australia have received a COVID-19 booster clinic on-site for residents and workers who are eligible,” they said. “All 2,600 facilities have been contacted and offered a Commonwealth in-reach booster program.”

“A further 531 facilities are scheduled for a booster. The taskforce has contacted vaccine providers and asked that the remaining sites be prioritised for a booster clinic in January.”

The spokesperson said facilities also have the option to vaccinate using their own teams or engage a local GP or pharmacist, and not all aged care residents will be due for a booster at the same time.

“In aged care there are new people constantly entering facilities who would have had their vaccination at a different time. The program is targeting those facilities where it’s understood most are now eligible and there will be ongoing monitoring to ensure residents have access to a booster in light of the changed ATAGI advice.”

Aged & Community Services Australia CEO Paul Sadler said while the booster program was “going well” overall, it's “been a real challenge” for providers to find enough staff to support the rollout over the holiday period.

"I've had CEOs of aged care services ringing me up and ... actually weeping on the end of the phone because they're struggling to find the staff to maintain the quality of care that they want to, and to enable older people to see their relatives over the Christmas period," he said.

"We've got outbreaks in more than 100 aged care homes across Australia ... so this is a really difficult time for aged care and it's really important this booster program rolls out as quickly as we possibly can to protect older people.

“The fact ... over half of the aged care homes already had the booster clinics is a really good start. We need to keep up that momentum through January and in February and try and protect as many older people as we can.”

The company which runs the home and the home itself were approached for comment.