While more than one million people in Australia have received a booster, there are signs the rollout is behind the pace - and that the third shot may not be your last. 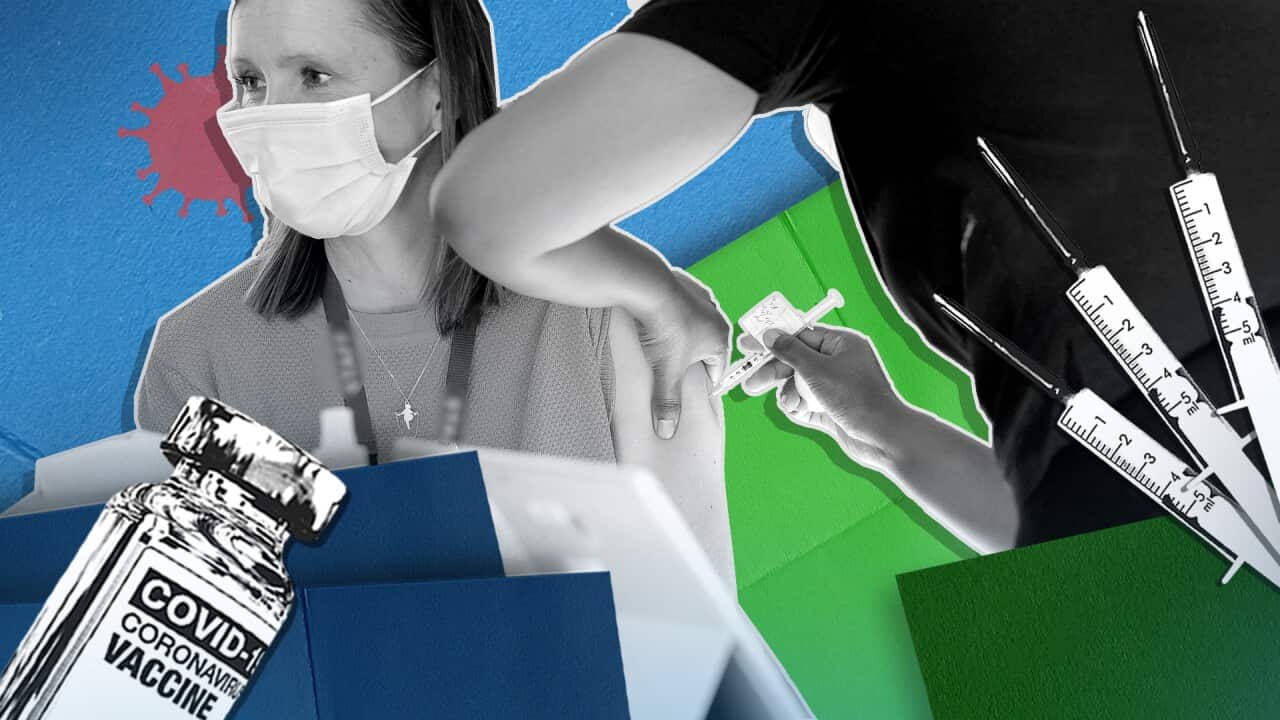 Some four million Australians will be eligible for a booster shot by the end of the year. Source: SBS News

More than one million Australians have now had a booster shot against COVID-19 and there is discussion in the scientific community that having three doses, rather than two, may be necessary for people to be considered 'fully vaccinated'.

But with infections likely to soar worldwide as more countries ease restrictions, and with new variants a future possibility, the third shot might not be the last.

Dr Deborah Cromer studies the spread of infectious diseases such as COVID-19 at the Kirby Institute.

Advertisement
"Even though people have quite high levels of immunity following vaccination, over time that does wane," she said.

"With Omicron, what you have to combine that with is the fact that the immunity we have appears to be less effective."

"So we need to get booster shots to get immune levels up to a place where they are going to be protective."

A COVID testing queue in Melbourne. Lines are growing in the lead-up to Christmas. Source: AAP

Dr Cromer compared the use of COVID-19 booster shots with the seasonal vaccinations used to protect against the flu.

“Think of something like a flu vaccine; people get that every year, and we don’t necessarily think of it as a booster dose, it’s just a regular vaccine.

“I think we can probably expect that we will need something similar against COVID-19.”

How does Australia compare with other countries on boosters?

The federal government has fast-tracked COVID-19 boosters in an attempt to limit the spread of the Omicron variant.

Australia has administered more than 1.5 million booster doses – or about six boosters for every 100 people.

Israel, lauded for the efficiency of its booster rollout, has administered about 44 boosters for every 100 people.

The United Kingdom, scrambling to contain a winter Omicron outbreak, has administered about 36 boosters per 100 people.

It is predicted that some four million Australians will become eligible for a booster shot by the end of 2021. The federal government maintains there are enough to meet demand.

GP Danielle McMullen, the NSW president of the Australian Medical Association, said the booster program needed to be scaled up at pace.

“We don’t want to panic the community, because we know the first two doses still does protect you from hospitalisation for at least that five months or so."

“But when we look forward to next year, we know that a significant number of boosters are going to be needed.”

Booster shots are currently available for those who are over 17 and who have had their second vaccine jab at least five months ago.

The minimum time between people's second jab and the booster shot had been reduced from six months and now state leaders want the federal government to further reduce that time frame to four months.

Prime Minister Scott Morrison said he would rely on the advice of the Australian Technical Advisory Group on Immunisation (ATAGI) on immunisation time frames.

ATAGI recommends either the Pfizer or Moderna jab as a booster, regardless of the first vaccine.

How effective are vaccines against Omicron?

Doherty Institute immunologist Jennifer Juno said there were early signs the first two vaccine doses were not as effective against the Omicron variant.

"We have this flood of initial data now that says the antibodies and the immune responses that we get from the first two doses don't recognise Omicron as well."

"But the data that we currently have from people who have received their third dose, is that their bodies do seem to do much better in recognising the virus."

"We know now from a lot of data that the third booster shot actually brings your immune response to a level that's higher than what you ever achieved with the first two doses of the vaccine."

Two UK studies published on Wednesday showed
COVID-19 infections with Omicron are less likely to result in hospitalisation
compared to the Delta variant.