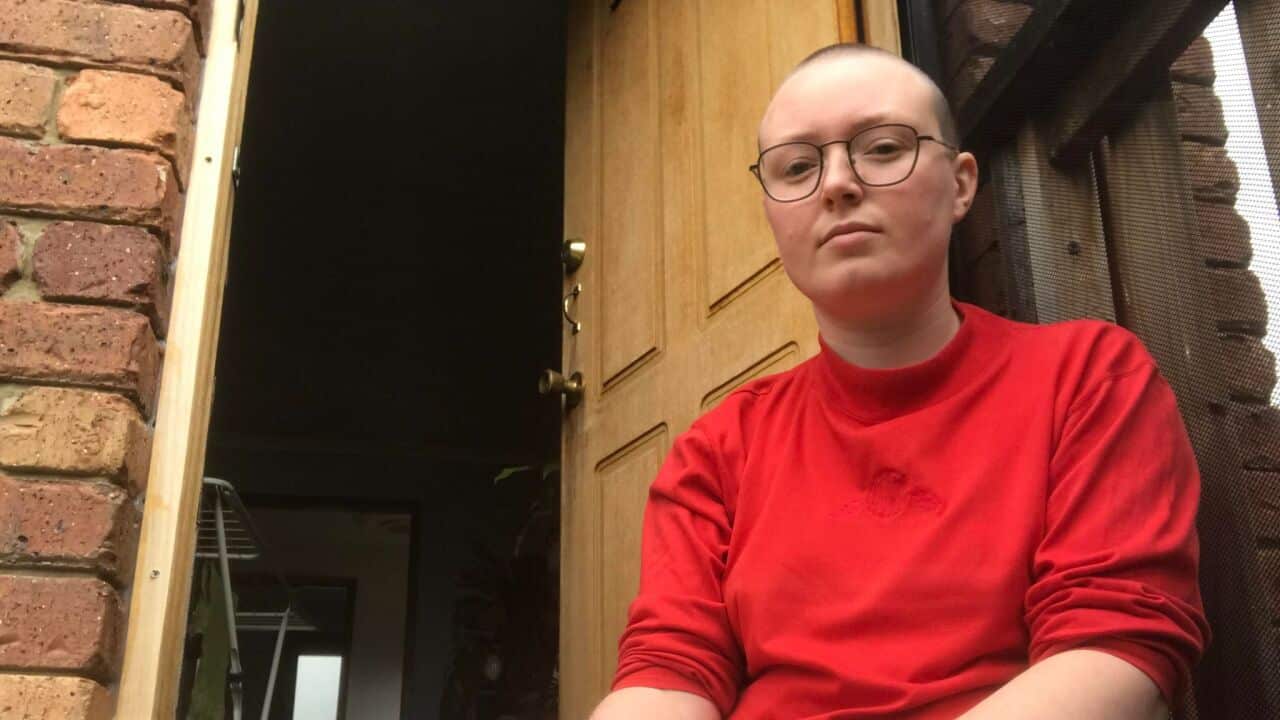 Immunocompromised people in Australia say they've been forced to return to lockdown by cavalier government measures and attitudes around surging COVID-19 cases.

The Hobart-based 23-year-old lives with a raft of chronic illnesses and immune conditions; Ehlers-Danlos syndrome, fibromyalgia, mast cell activation syndrome, and adrenal insufficiency, which put them in the severely immunocompromised category when it comes to COVID-19.

With the spread of the virus in Tasmania
recently hitting unprecedented levels
, they’ve now made a decision to live in self-imposed lockdown because they don’t feel safe out in the community.

Advertisement
“In Tasmania, we've lived the past two years with relatively lots of freedom, because we've had no COVID in the community. Now we've got thousands of cases,” Giarn says.
Giarn Carroll in their bedroom Source: SBS
Giarn says self-imposed lockdowns are even harder than government-imposed ones because people doing them are invisible to support services.

“I don't have any of that stuff that was facilitated for the country-wide lockdowns. I’m now having to figure it all out for myself, with no sort of knowledge of when this might end or how long I'm going to be confined for.”

“With my Ehlers-Danlos Syndrome, it's a physical disability, and the main things that help keep me moving and mobile are hydrotherapy and physiotherapy - but I can't access either of those at the moment without putting myself at risk.”

“A lot of my day is spent trying to do physio exercises at home. But because I don't have access to care, I’m in quite a lot of pain at the moment.”

“After two years of having worked really hard to not get this virus and trying to do all the right things, even the people who are doing the right thing and are really healthy are still getting this virus.”

The 42-year-old lives with myalgic encephalomyelitis (ME), a condition often referred to as chronic fatigue syndrome
which shares many similarities with long COVID
.

Katie’s not only worried about contracting COVID-19, but also the possibility of developing long COVID on top of her ME. As such, she’s made the decision to isolate and stop going to her retail job.

“Right now, my health is the priority and if I lose a few shifts because of that, well then, so be it … I'll lose some money and potentially some credit with my employers and managers, but it just seems to be the right choice for me to make,” she says.
READ MORE
'From Wonder Woman to nothing': The reality of having long COVID
It’s estimated
up to 500,000 people
in Australia are severely immunocompromised.

And while there’s no official health advice that says vulnerable people should stay at home, Giarn says a self-imposed lockdown was the safest option for them.

“New variants are supposedly going to be less severe and [COVID-19] is being looked at by some as if it was like a normal cold or flu that everyone must get ... That doesn't actually work for everyone.”

“A lesser strain of COVID-19 can still mean really serious things for people who have compromised immune systems.”

The federal and New South Wales governments have been accused of pursuing a “let it rip” approach to the current Omicron wave and putting pressure on health systems.

“That’s a direct result of some of the attitude of the NSW government and the federal government,” Labor leader Anthony Albanese said earlier this month.

“The truth is this: the ‘let it rip’ approach is tearing communities apart.”

Prime Minister Scott Morrison rejected Mr Albanese’s comments, saying the best medical advice was to avoid lockdowns and to ride out the next peak of the virus.

“You push through. You don’t lock down,” he said.
READ MORE
Immunocompromised people in Australia 'maddened' by narrowed close contact definition
Katie says she was shocked when she heard those comments.

“Coming from our prime minister, it’s just a really, really bad precedent for the rest of Australia. The ‘it's not so bad, so keep doing what you're doing and push through and we'll be right’ - I find that infuriating and completely negligent.”

Mr Morrison has also urged Australians in recent weeks to take
"personal responsibility"
in helping prevent the spread of COVID-19.

“We have got to get past the heavy hand of government and we have got to treat Australians like adults. We all have our own responsibility in our communities and for our own health,” he said just before Christmas.

Katie says she feels that approach is leaving vulnerable people behind and making them fend for themselves.

“The way that the government has handled this has meant I have had to take matters into my hands and protect myself because the government that was actually meant to do that stuff isn't doing it.”

“I've had to make that call and it's been a hard call to make but I think it's been a really important one.”

While there are no statistics available on how many people with disability have returned to isolation in recent weeks, People with Disability Australia president Samantha Connor says she's aware of several cases in the disability community.

“And it’s not just people with disability [doing it],” she says.

“There’s also a good percentage of the population who are also choosing to be in self-imposed isolation because they want to keep other people safe, including their family members.”

Disability groups and their advocates say they have been repeatedly forgotten or adversely impacted by policy during the pandemic.

Despite being slated as a priority group for vaccination, the rollout to people in disability care got off to a much slower than anticipated start. A disability royal commission report found last year said the cohort had been “de-prioritised”,
a suggestion the government rejected
.

Maggie Rutjens, program manager at Disability Advocacy and Complaints Service SA, says many people with disability “of all ages and location” have lost the critical supports they need to feel safe at home and in the community.

“This is leading to increased feelings of fear and vulnerability and has driven people to self-isolate. It is not their preference … but it’s been necessary because they’ve lost the supports that assist them to access the community safely and [they feel] there are inadequate supports available to them should they contract the virus.”

Ms Rutjens says people with disability “are facing a multitude of issues that all compete as priorities and place their lives at risk”.

“A person should never have to choose between their health and their dignity.”

A person should never have to choose between their health and their dignity
Maggie Rutjens, Disability Advocacy and Complaints Service SA

With anxiety around the pandemic and controversial proposed changes to the National Disability Insurance Scheme in the past two years, Ms Connor says “it's been an enormous fight” for many people with disability “just to get basic help”.

She says all vulnerable people need to be better taken into account as Australia battles the next phase of the pandemic, as a blanket "personal responsibility" approach leaves the immunocompromised behind.

“Realistically, we need to strike a balance between making sure that we have a healthy economy that the people who need protection are protected.”

“But it's ridiculous to think we're all going to embrace rugged individualism, and, you know, somehow save ourselves. That isn't what communities do.”

A spokesperson for the Department of Health said in a statement it has been committed throughout the pandemic to “ensuring the community remains safe, especially those who are most vulnerable”.

“Advice provided by the department considers all Australians, including Australians whose immunological systems are suppressed or compromised because of illness or because of therapies for relevant illnesses,” they said.

“The current wave of infections of the Omicron variant is a challenge for Australians, including immunocompromised people. We encourage all Australians to follow the public health advice of their respective states and territories and where necessary seek personalised medical advice from their GP.”

The spokesperson said vulnerable people worried about COVID-19 should continue to get their booster vaccines, wash their hands, wear masks, follow respiratory etiquette, stay home and get tested if they’re unwell, and keep abreast of the latest health advice from trusted sources.

“More vulnerable members of our population are being well protected and where necessary will receive the latest new treatments within a health care system that is well prepared to manage the challenges Omicron is presenting to the world.”

A management and operational plan for people with disability has also been developed to provide a targeted response for people with disability, including their families, carers and support workers, the spokesperson added.
Giarn Carroll is living in self-imposed lockdown at their home in Hobart. Source: SBS
It's little comfort for Giarn, who says it hurts to see others out and about.

“This week I borrowed my friend's car to drop something off to someone and I didn't leave the car. But it was shocking to me because I've been in my house, [and] driving through the city I realised that everybody else is getting to do things.”

“They're going to festivals, restaurants, parties, they're seeing their friends again. They can go to work. That isn't a huge risk for them comparatively.

“It just completely feels like we're missing out. Seeing everybody else in business as usual - it's a bit of a stab in the guts.”