Department of Health secretary Brendan Murphy has faced repeated questions about a scathing draft report from the disability royal commission warning it would be “unconscionable” to ease restrictions too early. 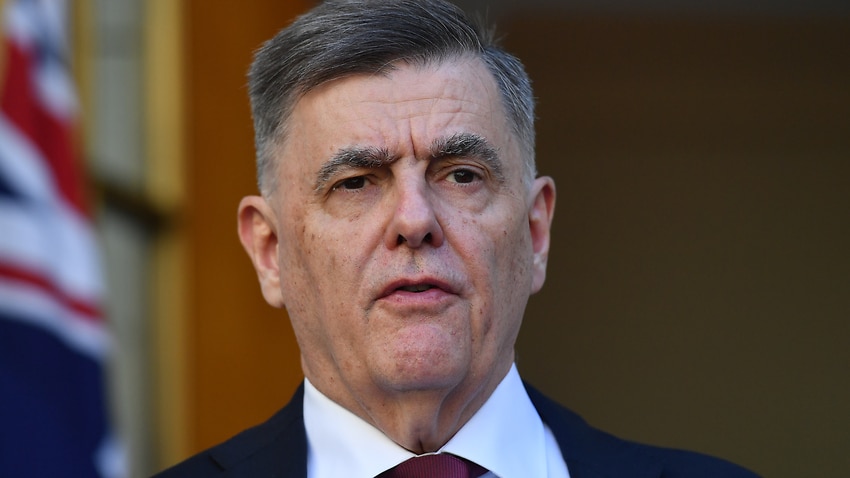 Health department boss Brendan Murphy has downplayed the prospect that people with a disability yet to be vaccinated against COVID-19 will be left behind as states race to lift lockdown restrictions.

His commitment comes after the disability royal commission declared in a scathing draft report that it would be “unconscionable” to ease health restrictions before the cohort had the chance to get vaccinated.

The commission has expressed concern some people with disabilities could remain without protection as states such as New South Wales and Victoria move to ease restrictions next month.

The Department of Health secretary was pressed repeatedly about the commission’s warnings during a hearing of the Senate’s COVID-19 committee on Tuesday.

He said people with disabilities remain in the highest priority group, indicating “significant action” is being taken to get vaccines into their arms.

“We are very confident the disability community will be fully vaccinated similar to the general population targets,” Professor Murphy told the committee.

“[They] will have certainly had a genuine opportunity to be vaccinated by the time we reach those targets.”

But he refused to directly address the findings from the draft report because it has not been officially sent to the government.

The royal commission’s report had warned that people with disabilities living in shared accommodation had been included in phase 1a of the vaccine rollout but then quietly “deprioritised” in favour of aged care residents.

The document said the rollout of vaccines to people with disabilities had been "seriously deficient", warning against the vulnerable cohort being unfairly exposed to a heightened risk of contracting the virus.

“In our view, it would be grossly unfair, indeed unconscionable, if any people with disability who have not been given the opportunity to be fully vaccinated by the time the 70 per cent threshold is reached are denied the freedoms available to people who have been fully vaccinated,” the report said.

The report also raised concerns over a lack of consultation with an advisory body set up to assist the COVID-19 response for people with disabilities.

Professor Murphy said continued efforts had been made to consult on the vaccine rollout and disputed that people with disabilities had been “deprioritised”.

"Certainly the rate of residential disability care vaccination was significantly slower at that time because of the clear need to get the residential aged care population vaccinated,” he said.

“[But] they remained a priority the whole way through the program.”

Currently, around 64.8 per cent of NDIS participants have received one COVID-19 vaccination and 46.2 per cent are fully vaccinated.

This figure increases to 75.2 per cent for NDIS participants in shared accommodation who have received one dose and 66.7 per cent fully vaccinated.

But a state-by-state breakdown of vaccination rates for NDIS participants more broadly shows some jurisdictions are lagging behind others.

The data shows the rate of those fully vaccinated was 51.1 per cent in NSW, in Victoria 47.4 per cent, Queensland 40.3 per cent, in South Australia 43.5 per cent and Western Australia 37.8 per cent.

“The problem is with not being able to get supply, with lack of access to venues [and] with lack of support. We know there are significant barriers,” she told SBS News.

“If they are not made safe - unless they put the brakes on there is a chance there are going to be dire consequences.”

COVID-19 taskforce commander Lieutenant General John Frewen said work is underway on an acceleration plan for vaccinations to the cohort, to be presented to national cabinet later this week.

“We're trying to make sure we have got everything in place to make sure there [are] as few impediments as possible to getting all of the people in the disability sector vaccinated,” he told the committee.

“We need a surge in resources - a clear imperative from government to make vaccination of people [with a disability] a priority,” he said.

"[It's about] not just how many people but who has been vaccinated."

The committee also heard concerns that people on the NDIS do not represent the full population of individuals in Australia who identify as having a disability.

Dr Gauntlett said out of around 4.4 million Australians who identify as living with a disability only around 10-15 per cent were NDIS participants.

"We need to have a better data collection mechanism for people with a disability," he said.

Department of Health official Dr James Hart said work is being done to form a “better picture” of the broader cohort by the Department of Social Services and National Disability Insurance Agency.

The disability vaccination rates compare to just over 76 per cent of the adult population, which has received one dose, and more than 51 per cent fully vaccinated.