The United Nation’s Human Rights Committee asked the Australian government to release the family from detention within 30 days. That time limit has now passed. 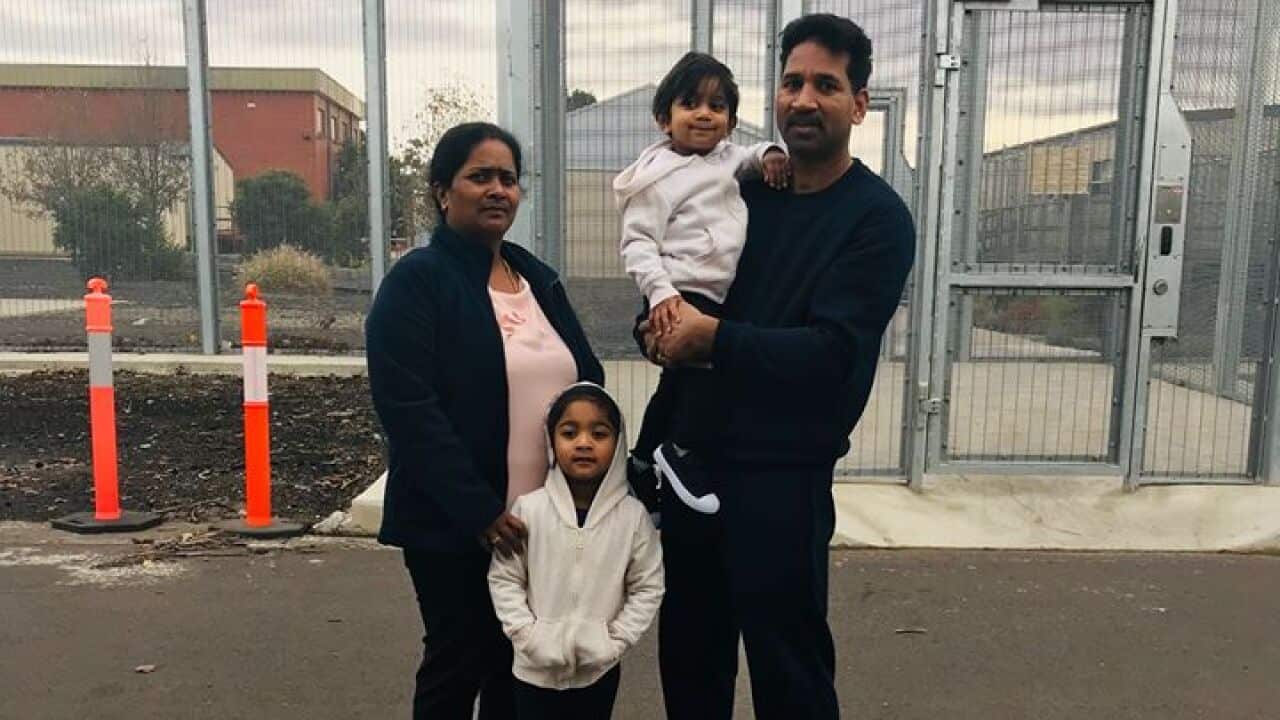 The family of four are currently the only people detained on Christmas Island. Source: Supplied

The Australian government has ignored a
request from the United Nation’s Human Rights Committee
to release a Tamil family of four from immigration detention on Christmas Island.

Priya and Nadesalingam and their two children Kopika, four, and Tharnicaa, two, who were both born in Australia, have been fighting deportation to Sri Lanka since March 2018 when they were placed in a Melbourne detention centre after their parents’ visas expired.

The UN committee, which is tasked with monitoring breaches of the International Covenant on Civil and Political Rights (ICCPR), wrote to the family’s lawyer on 1 October in response to a complaint made on behalf of the family against the government.

Advertisement
The committee said they had requested interim measures to have the family removed from detention within 30 days. That timeframe has since expired.

The family have submitted a complaint to the UN's Human Right Committee alleging a breach of the International Covenant on Civil and Political Rights (ICCPR). Source: Supplied

When asked by SBS News why it had not acted on the committee’s request, despite being a party to the ICCPR, a department of Home Affairs spokesperson declined to comment further and pointed to the departments earlier statement, which said it was aware of the UN's request.

In the statement, published on 2 October, the spokesperson said the family would remain on Christmas Island “whilst the judicial review proceedings are before the court”.

Leading international refugee law expert Mary Crock told SBS News it was not surprising the government had not upheld the committee’s request.

“The problem is that for many years now … Australia has taken less and less notice of what UN human rights committees say,” she said.

“At the moment, you have a government that really does not believe in the system at all … they take the view that a complaint to the UN system can work its own course, but it won’t interrupt whatever our domestic immigration procedures are.”

While the committee has the authority to offer recommendations and make rulings on complaints alleging breaches of the ICCPR, the UN cannot force a country to comply.

Professor Crock believes it is likely the committee will find Australia is in
breach of its human right obligations
but added the ruling would make little practical difference to the family.

“Australia has been found to be in
breach of our obligations under the ICCPR so many times now
, and under the torture convention, that it doesn’t make any difference,” she said.

"We’re not living in an age where respect for human rights has any currency. That’s the problem. So the poor old UN, all they can do is keep bleating away and hope one day things will be get better.”


The committee said it was unable to comment on the case until a final decision was made, but confirmed a Sri Lankan family held on Christmas Island had submitted a complaint under the ICCPR’s optional protocol,
which allows for individuals to make complaints against states
.

According to the UN, signatories to the optional protocol recognise the “competence” of the committee to hear complaints from people who “claim to be victims of a violation of that state party of any rights set forth in the covenant [ICCPR]”.

Australia has been a party to the protocol since 1991.

The complaint remains in a preliminary phase, during which the committee may request the government take provisional measures if it considers there is a risk of irreparable harm.

Lawyers acting on behalf of the family also declined to comment while the complaint was being investigated but said there had been no major updates to their situation.

The family’s future is currently in the hands of the Federal Court after a judge ruled there was enough
evidence for Tharnicaa’s bid for asylum to be taken to trial
. A date for the trial has not been set but the next hearing will take place on 16 December.

Home Affairs Minister Peter Dutton has repeatedly said the family, who had settled in the rural town of Biloela, Queensland, would remain on Christmas Island until the case is finalised, which may take many months.

Professor Crock, who is also a practising migration lawyer, believes the high-profile nature of the case will mean the family have little chance of a quiet resolution or the opportunity to move to a third-party country in the interim.

Last week it was revealed the
reopening of the Christmas Island detention centre this year had cost the taxpayer $27 million
, despite the family being the only people detained on the island.

Home Affairs Department officials told a Senate estimates committee that more than 100 staff have been on hand at the centre.

Shortly after estimates, a phosphate mining company was awarded a $20 million contract to
manage facilities on the island for the next three years
.

The detention centre, which was first closed in October 2018, was reopened in February to deal with what the Morrison government predicted would be an influx of asylum seekers as a result of newly introduced Medevac laws.