A national arts directory has been rolled out to support Australia's talented artists and performers. Here, SBS News meets some of those working in the field. 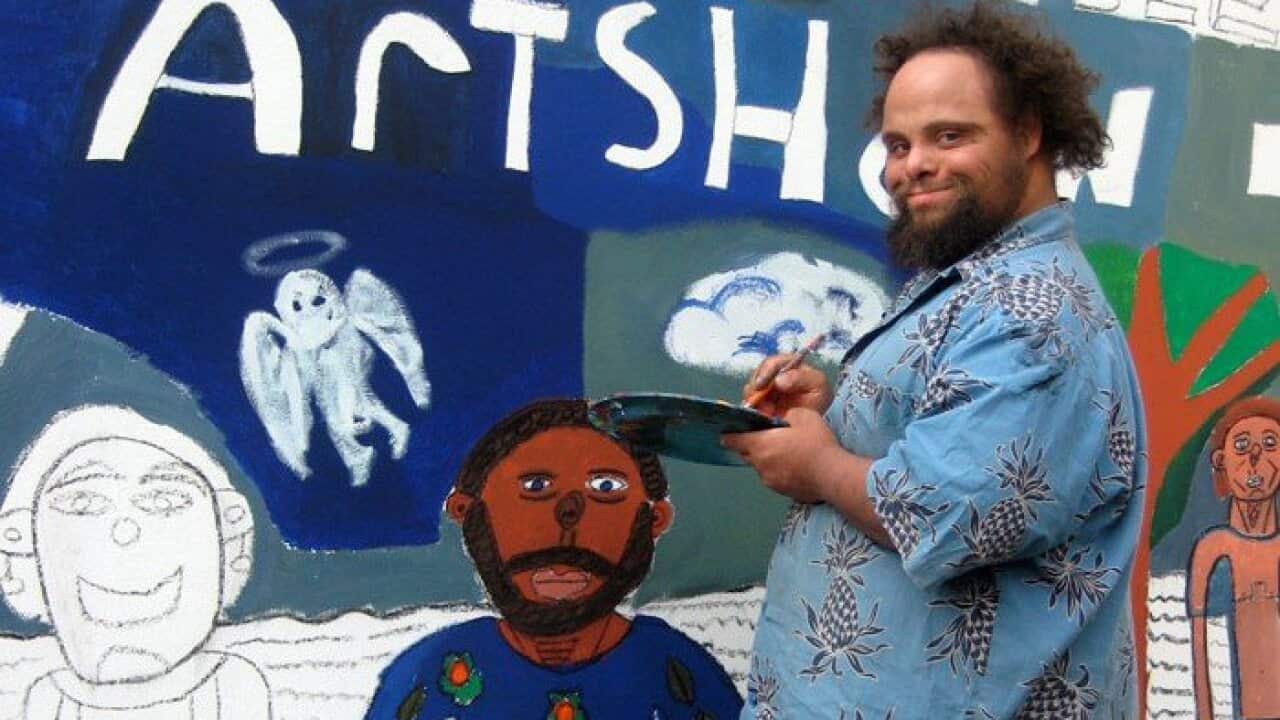 Thom Roberts sees the world like no one else.

To him, people aren't just people, they're also trains and buildings.

He's the Burj Khalifa skyscraper in Dubai, which stands at more than 160 storeys. He's also a country express train service, travelling through the most beautiful and far-flung parts of Australia.

Advertisement
Artist Thom Roberts seeing himself and everyone around him as buildings and trains. Here he is seeing one of his latest works hung in Sydney. Source: SBS / , Karla Hansen

His unique way of seeing the world is reflected in his art.

The professional artist spends most days creating at Studio A, a humble studio in Sydney's Crows Nest.

It's a support studio creating professional pathways for artists with intellectual disability.

"It's people and the city's infrastructure personified. The world is very bright, alive and animated for Thom."

Thom Roberts' work was recently chosen for The National: New Australian Art 2019 in Sydney. One side shows people (left), the other shows them as trains (right) Source: SBS / , Karla Hansen

Artists to get more support

Slowly, more initiatives are being developed for people like Thom to access conventional education, professional development and the opportunities needed to be successful artists.

The website was designed by and for people with disability and is targeted at those starting out as well as professionals.

Communications and Arts Minister Paul Fletcher said at the website's launch: "It is important for our arts and culture bodies to be inclusive when designing programmes and events so everyone can take part”.

International performer Caroline Bowditch has been a driving force behind the website's development because, she says, "trying to find accessible arts opportunities is often like finding a needle in a haystack".

The former Glasgow-based artist and choreographer packed up her costumes last year to return to Australia as CEO at Arts Access Victoria.

"We really need to reinforce the value of the lived experience of disability and how important it is in the artistic ecosystem," she said.

The NDIS was designed to enrich the lives of people with disability with funding for supports and services.

Ms Bowditch said people often think of enrichment as sport or a health activity, but it was time the arts were taken just as seriously.

"It’s in their blood, it’s absolutely crucial to their lives and often it isn’t the thing that’s considered when it comes to thinking of essential elements to people’s lives,” she said.

The National Disability Insurance Agency has welcomed CHOOSE ART and says it would like to see more participants supporting the arts.

“There are now over 300,000 people in the NDIS scheme and we know we’re going to grow to more than 500,000 and we’d like to see new participants and existing ones include arts in their plan,” Jamie Lowe from the NDIS said.

'These are skilled artists'

NDIS participant Zion Levy Stewart started sketching aged 20. His subjects then were mostly the visitors of his family home in the NSW town of Mullumbimby.

Twenty years later, he was an entrant in this year’s Archibald Portrait Prize.

Mr Stewart, who is in his forties, has Down Syndrome and experiences difficulty communicating through the spoken word.

Born in London he spent his teenage years in Sydney, but Mr Stewart’s arrival in Mullumbimby coincided with his artistic flowering.

His sketches, painted canvases and ceramics are now admired around the world, and hung in private collections in Australia, the UK and the US.

Another NDIS participant, Geelong artist Christian Den Besten has spent the best part of two decades rendering the buildings and streetscapes of his beloved hometown.

The 47-year-old lives with a moderate intellectual disability and has been an NDIS participant for five years.

Her world is a kaleidoscope of vivid colour where all pinks are fuschia, and red is never crimson, it's a fire-engine red.

"I just love painting and colour and pattern, I like flowers and painting wildflowers," she said.

Her work and others from the studio are often displayed around Sydney's CBD.

Ms Mordy, the studio's CEO, is proud of the space and the work that comes out of it - and she wants to see more of it.

"This is their profession, it's what they're trained at, it's their talent and it's what they get paid for."
Studio A is a supported studio in Sydney for professional artists with intellectual disability. Source: SBS / , Jasmine Tate

The greatest challenge the studio faces, she says, is the perception of the capacity of an artist with a disability within society.

"Often when I tell someone that I work with artists with intellectual disability, they congratulate me on my work as a volunteer art therapist," she said.

"So there seems to be a really limiting perception about the kind of art this community can engage in - that it can only be therapeutic, when in fact these are skilled, talented artists."