International students in Australia have been hit hard by the economic impacts of COVID-19. With many now unemployed and unable to return home, those working to support them say time is running out. 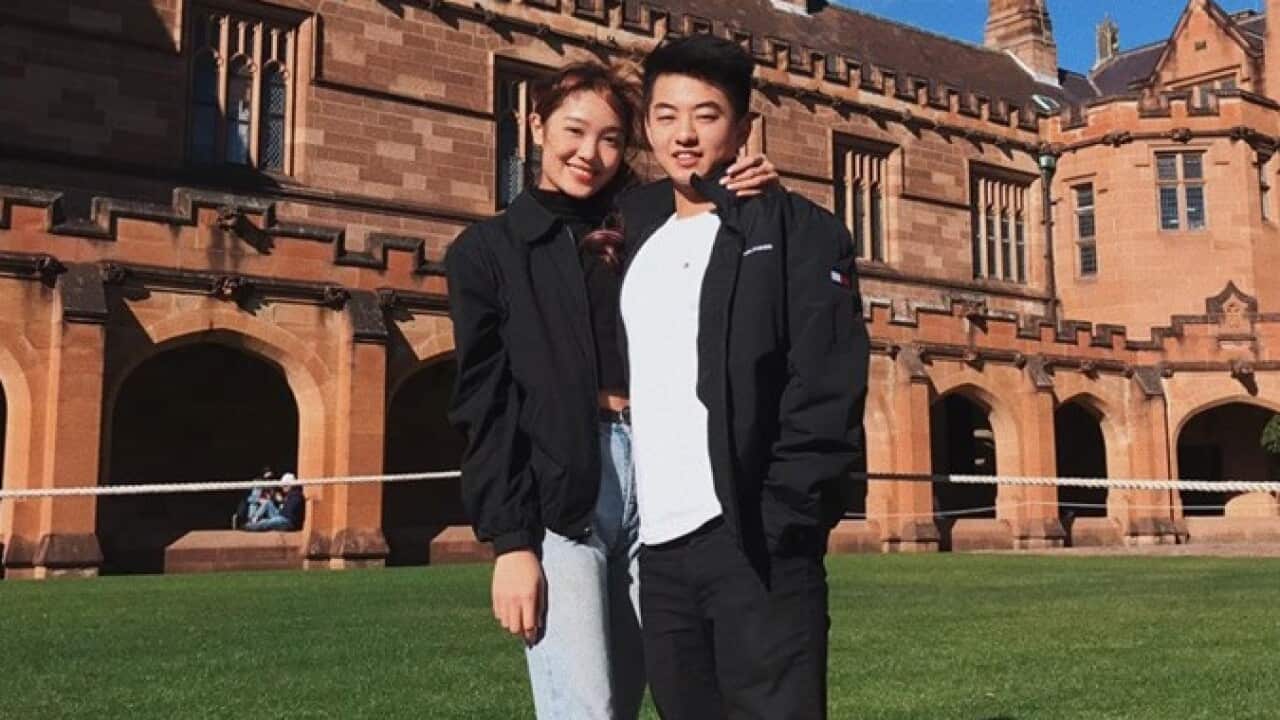 Chinese student Vikki Qin, pictured with her boyfriend, has lost both her jobs. Source: Supplied

There are an estimated 565,000 international students in Australia, and prior to the coronavirus outbreak, many were employed across the country's hospitality and retail sectors.

But after losing their jobs, and with no entitlement to government support, international students "are now one of the most vulnerable groups in our society," lawyer Nick Hanna told SBS News.

"Often they were first people to lose their jobs, but unlike their Australian counterparts they are not eligible to receive financial benefits."

Advertisement
Sydney-based Mr Hanna, who often represents students, said he has been fielding calls from dozens of international students who say they will soon be on the streets.

"There are a large number of international students, who I've spoken to, who are literally, one, two, three weeks away from homelessness."

21-year-old Andrea Andrade lost her job in hospitality and say without any source of income she will not be able to continue to pay rent. Source: Supplied

Andrea Andrade was born in Venezuela but holds Italian citizenship. She has been studying a TAFE course in community services in Perth since 2018.

Like many others, the 21-year-old lost her job in hospitality and is without a financial safety net. She fears if she remains unemployed she won't be able to afford her rent and food.

"I cannot pay rent, I cannot pay food. We did try talking to our landlords but they cannot help us," she said.

"I have savings but its only a matter of time before that runs out. I do have family who can help me in case of an emergency or in case I hit crisis, but they're going through the same situation, they have to support themselves."

Andrea Andrade doesn't know how she will support herself to remain in Australia. Source: Supplied

“Many international students can no longer rely on family support from their home country, as the pandemic has shut down entire economies and ways of earning a living," she said.

"I've heard from hundreds of international students in the past week. They are destitute and they are at the point of desperation."

International students are not covered by the federal government's $130 billion JobKeeper wage subsidy scheme, which passed federal parliament on Wednesday.

Last week, Prime Minister Scott Morrison said international students who can no longer afford to support themselves in Australia should go home.

"All students who come to Australia … have to give a warranty that they are able to support themselves for the first 12 months of their study. That is not an unreasonable expectation of the government, that students would be able to fulfil the commitment that they gave," he told reporters.

"The alternative for them to return to their home countries."

READ MORE
So you've missed out on JobKeeper access: Here's what support is still available to you

But Mr Hanna said it is not that simple.

"For example. there is a large number of international students here from Colombia. Well, Colombia has closed its borders to its own citizens. They are literally trapped in Australia and if they don’t have some form of economic support, then they will be in dire straits."

"The situation is that I have lost my job, and since the crisis is global, my family has not been able to send me money either," she said.

"The prime minister says 'go back to your country' - they don’t understand, my country has closed its borders."

International education is Australia's third-largest export, injecting an estimated $32 billion a year into the economy.

Students are eligible to work up to 40 hours per fortnight and those who enrolled on a course for six months or more are required to pay taxes.

Australia is heavily reliant on the sector, but experts say it's a one-way street.

"Australia, until relatively recently, had a very inclusive system of immigration, where basically anyone coming here had the same rights as citizens," said Associate Professor Chris Wright, a researcher on the migrant workforce at the University of Sydney.

"Governments have wilfully wound those arrangements back to the point that we are in, where temporary migrants have very few rights, very little support and the downturn comes and the government's response is 'go home'."

He said years of government policy has "has gradually restricted and eroded the rights of temporary migrants".

Chinese student Vikki Qin has lost both her jobs as a barista and as the campus activity coordinator with the University of Sydney's student union.

She said she has looked at options to return home but flights are limited and expensive. Her parents' business in Shenzhen has also taken a huge financial hit as a result of COVID-19.

The 22-year-old economics student also fears that if she does go back to China, she may not be able to return to Australia to complete her degree.

"If I have to go back to China, and the travel ban continues, maybe I can't even come back for semester two, and it means everything will be a waste."

Vikki Qin fears if she leaves Australia she won't be able to return. Source: Supplied

She too is struggling to make ends meet.

Associate Professor Wright said it is very possible homelessness will become a reality for many students.

"If you haven't got income support, if you've lost your job, if you can't rely upon government welfare and you can't support yourselves, in terms of housing, then what alternatives do you have?"

Minister for Education Dan Tehan said he is aware "the impacts of this virus are affecting international students".

"Our government continues to work with universities and the international education sector to minimise the impact of COVID-19, and that includes finding innovative ways to support our international students," he said in a statement.

He said the government will allow students access to the retirement savings that they have accumulated while working in Australia.

"International students who have been here longer than 12 months and who find themselves in financial hardship will be able to access their Australian superannuation," he said.

But with migrant exploitation an ongoing issue in Australia, Mr Hanna argued many students have never been paid superannuation.

"Some do, but some employees don’t do the right thing," he said.

The latter appears to be the case for the Colombian student who spoke to SBS News.

"The company that I worked [with], they [didn't] pay me superannuation for three years," she said.

Calls for a hardship fund

The City of Melbourne has called for increased support for international students, including the establishment of a hardship fund.

"They're an incredibly important part of our city, not only because of their significant economic contribution to our city, but as valued members of our community."

Earlier this week, councillors supported a motion recognising the contribution made by international students to Melbourne and outlining a range of measures to support them.

But Universities Australia, the peak body for the sector, acknowledges more help is needed and said it is seeking to work with the federal government to achieve this.

It's chief executive Catriona Jackson said: “We want to work with the government to support the international students in this country, many of whom have seen their part-time jobs disappear, just like their Australian friends."

"Universities are offering crisis support, but more will be required.”

Australian universities are providing specific COVID-19 advice on their websites and students are advised to contact their universities for further support.