Days after a disability worker in Victoria died after contracting COVID-19, advocates are calling for urgent action to ensure the safety of Australians living with a disability who are particularly vulnerable to the disease, and their carers. 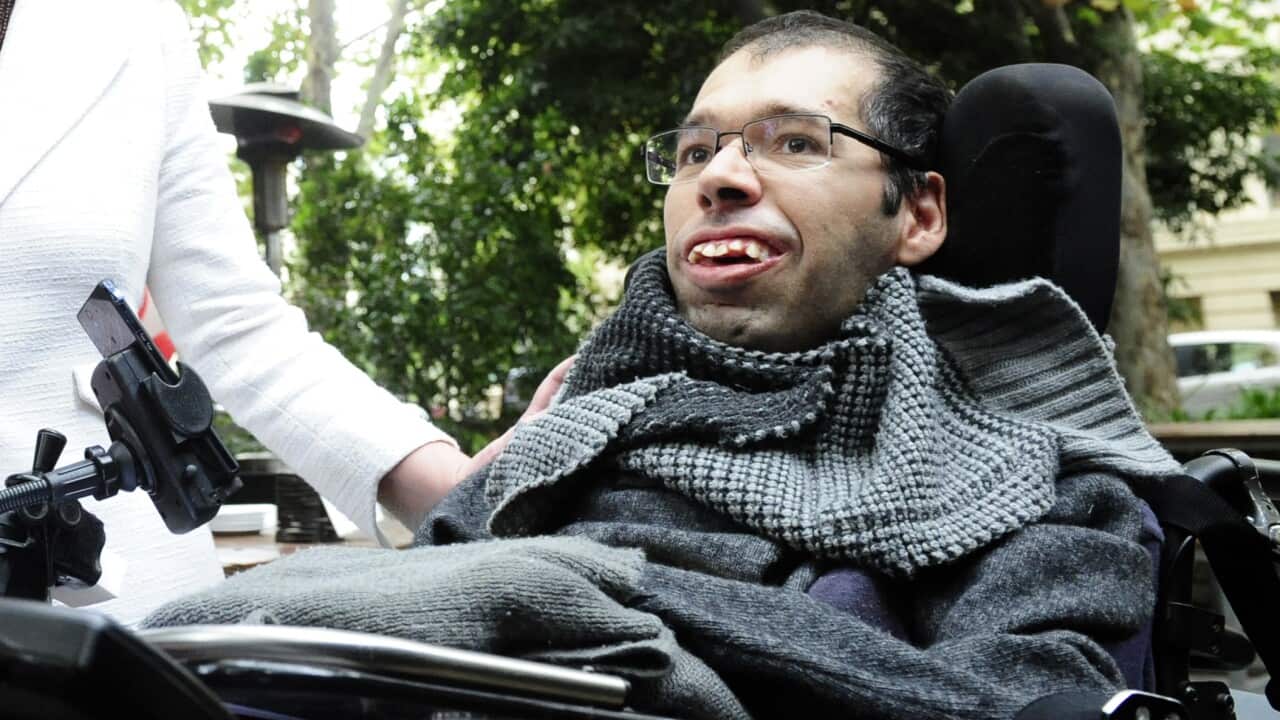 Melbourne resident George Taleporos wants protective equipment to be supplied to all people with a disability and their support workers. Source: AAP

As more than
three billion people across the world isolate themselves
against coronavirus, George Taleporos is forced to invite two or three people into his home every day.

The disability advocate from Melbourne, who lives with a severe physical disability and uses a wheelchair, relies on carers to complete the daily tasks he needs to live, including eating, showering and getting in and out of bed.

But every time a person enters his home, he takes a serious gamble. Due to his disability, which requires the daily use of a respirator, he is at high risk of dying from COVID-19 if he was to catch it.

Advertisement
“There’s a virus out there that can kill me very, very quickly,” the 44-year-old told SBS News.

“Even though I haven’t left the house in a month, it's very hard to socially distance because I rely on workers to come into my home every day to keep me alive."

George Taleporos with Scott Morrison at an event in 2017. Source: Twitter

Dr Taleporos is one of many disability advocates who have called on the government to provide
greater protections to people living with a disability
and those working in the sector. They want to ensure the supply of personal protective equipment and see carers recognised as an essential service.

Dr Taleporos requires his support workers to wear gloves and masks but said it has become increasingly difficult to find supplies due to shortages since the pandemic hit.

“Before the pandemic it was easy, but now orders that I have made have been cancelled,” he said, adding that he tried to buy some equipment online but decided against it due to quality concerns.

While protections for aged care workers, which have been described as the government’s “highest priority”, have been at the forefront of the national conversation around the pandemic, the disability sector has so far not received the same level of government support.

“We keep hearing about healthcare workers and aged care workers who are incredibly important, but we're not talking about disability workers. For many of us, they keep us alive, and they need personal protective equipment to do their work safely as well," Dr Taleporos said.

West Australian Senator Jordon Steele-John, who has cerebral palsy and uses a wheelchair, said: “Disability is still not uniformly viewed as a priority for personal protective equipment, even though we are at such a profound risk from the virus.”

“At the moment, the response for the need to set up a national back-up capacity workforce has also been all over the place, really.”

Comparatively, aged-care workers are able to access priority COVID-19 testing, will receive preventive training to manage the spread of the virus and are able to access protective equipment from the national stockpile. The number of available staff will also be boosted where there is a need for an urgent health response.

Jeff Smith, who is the chief executive of People With Disability Australia, the national peak body for Australians with a disability, said he had been “concerned and frustrated” by the government’s delay in addressing the risks to people with a disability and their carers.

“We are hearing reports that people with a disability are not getting access to the personal protective equipment, and also that their support workers are not getting that access,” he said. He added that some workers were already refusing to visit people at home due to the lack of supplies.

“It’s also, of course, the case that some people with a disability are in the high-risk category, whether that’s due to a respiratory disease or the fact they are immunosuppressed, so the interaction with a support worker is oftentimes a much riskier exercise.”

The calls for greater protections follow the death of Sumith Premachandra, a 55-year-old disability worker in Victoria
who died at the weekend
after contracting the virus.

In a statement provides to SBS News, the Victorian Department of Health and Human Services described Mr Premachandra's death as a “tragic incident” and extended their condolences to his “family, friends, his co-workers and the residents he cared for”.

Other issues addressed by the letter were fears that people who rely on support workers could be abandoned if community transmission increased, the need for access to priority testing for people with a disability and support workers, and the fact people on disability support pensions are unable to access the federal government’s $550 coronavirus supplement.

People With Disability Australia's Mr Smith said the organisations released the statement because they were concerned about the lack of immediate action to address and acknowledge the particular issues faced by the disability community.

On the same day the letter was released, the federal government announced the creation of an advisory group to develop a pandemic emergency response plan for people with a disability, with particular focus on those who have complex health needs.

Dr Taleporos, who is a member of the advisory group, said he is giving “very strong advice” that people with disability who require direct contact with support workers as an essential service need to be allowed access to protective equipment from the national stockpile.

The advisory group first met on Friday and an emergency action plan is expected to be finalised this week.

A spokesperson for the Minister for the National Disability Insurance Scheme (NDIS) Stuart Robert said a number of measures had been announced to support people living with a disability, including extensions of NDIS plans, outreach to high-risk participants and a priority grocery delivery service.

A Council of Australian Governments (COAG) disability reform council has also been convened, which includes all federal, state and territory disability ministers.