The ship's insurers Japan P&I said the sentences had been commuted on the grounds of good behaviour and 16 months of time served, allowing the captain and first mate to return home. 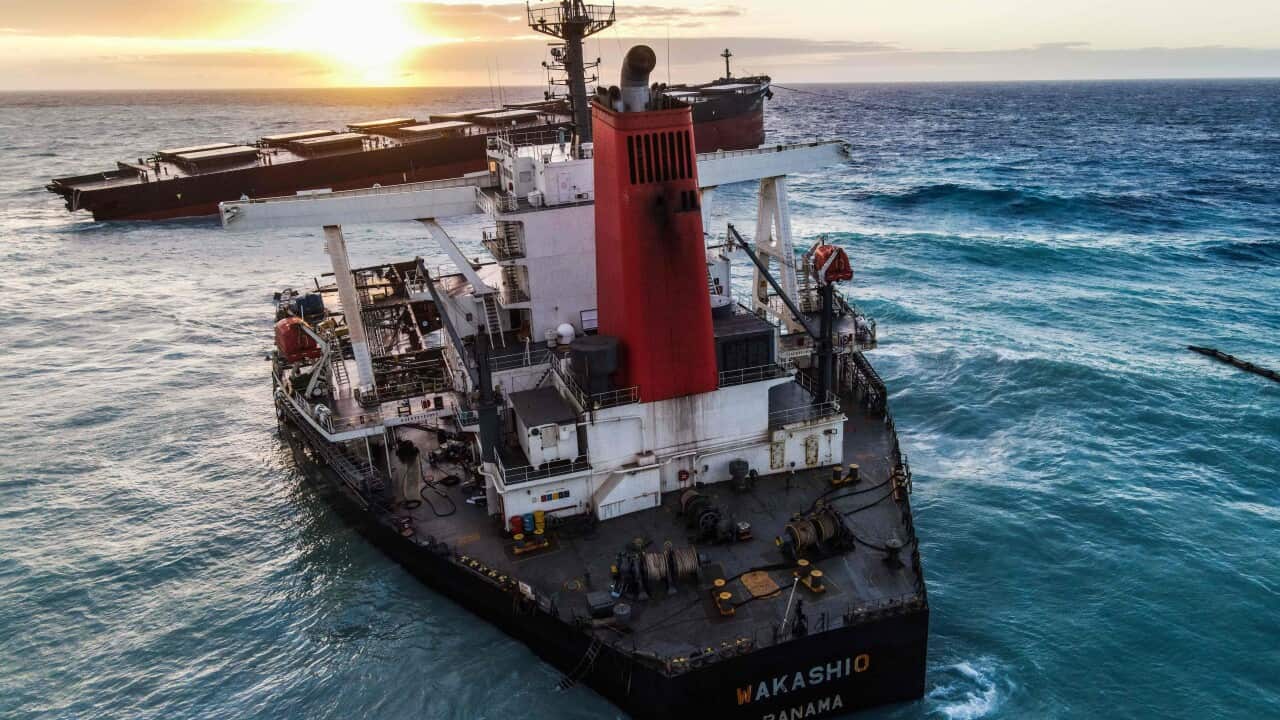 An aerial view taken in Mauritius on 17 August 2020 shows the MV Wakashio bulk carrier that had run aground and broke into two parts near Blue Bay Marine Park. Source: AFP

The captain and first mate of an oil freighter that crashed into a coral reef off Mauritius, unleashing the Indian Ocean archipelago's worst environmental disaster, will be released "imminently" after their 20-month sentence was commuted, a lawyer said.

The MV Wakashio, a Japanese-owned but Panamanian-flagged vessel, ran aground in July 2020, spilling more than 1,000 tonnes of toxic fuel into pristine waters, coating mangroves, corals and other fragile ecosystems.

The two men, who have been in police custody since August 2020, were convicted last week and sentenced on Monday, with magistrate Ida Dookhy Rambarrun noting that the court had taken "into consideration the fact that both defendants pleaded guilty and apologised".

Kushal Lobine, who represents the ship's insurers Japan P&I, said the sentences had been commuted on the grounds of good behaviour and 16 months of time served, allowing the pair to return home.

"Their departure is imminent. The captain will return to India and the other to Sri Lanka, their respective countries," Mr Lobine said.

"The captain and his second in command were irresponsible and did not deliver as they should on their navigational duties," the magistrate said on Monday.

The MV Wakashio was sailing from Singapore to Brazil with 3,800 tonnes of fuel oil and 200 tonnes of diesel aboard when it ran into the reef off the southeast coast of Mauritius.

During the trial, the captain admitted drinking during an onboard birthday party and said he had given instructions to approach Mauritian waters in order to gain access to a mobile phone network so that crew members could contact their families.

"The sea was bad, but the visibility was clear and it was safe to navigate ... At one point, the ship could not move and had touched the sea floor," Mr Nandeshwar said.

"Since I had had a few drinks, it did not seem worthwhile to intervene and it did not occur to me that we were sailing that close."

Activists from The Ocean Rebellion protest outside the UN's International Maritime Organisation on 19 October, 2020 in London, England. Source: NurPhoto

More than 1,000 tonnes of oil seeped into waters full of marine life from a gash in the vessel's hull before salvage crews were able to remove all the remaining fuel.

The accident occurred near two ecologically critical sites: Blue Bay, known for its coral gardens, and Pointe D'Esny, which hosts a mangrove forest, a crucial ecosystem as well as a weapon in the fight against global warming.

In the days after the accident, thousands of volunteers marshalled along the coast wearing rubber boots and gloves, scrubbing rocks and stringing together makeshift cordons to contain the oily tide.

Thousands of people also took to the streets in the following months to protest against the government's reaction to the disaster.

On Sunday, fisheries minister Sudheer Maudhoo said that the ship's insurers had agreed to pay compensation worth 112,000 Mauritian rupees (around A$3,500) each to hundreds of fishermen and fishmongers for the loss of earnings caused by the oil spill.

The vessel eventually split in two, and its bow and hull were towed 15 kilometres offshore and sunk.

The process to dismantle the stern section and remove it from the reef began earlier this year but has been postponed many times due to rough weather and strong waves.