While the Murugappan family have been granted temporary release into community detention in Perth, the government is making no promises about their permanent resettlement. 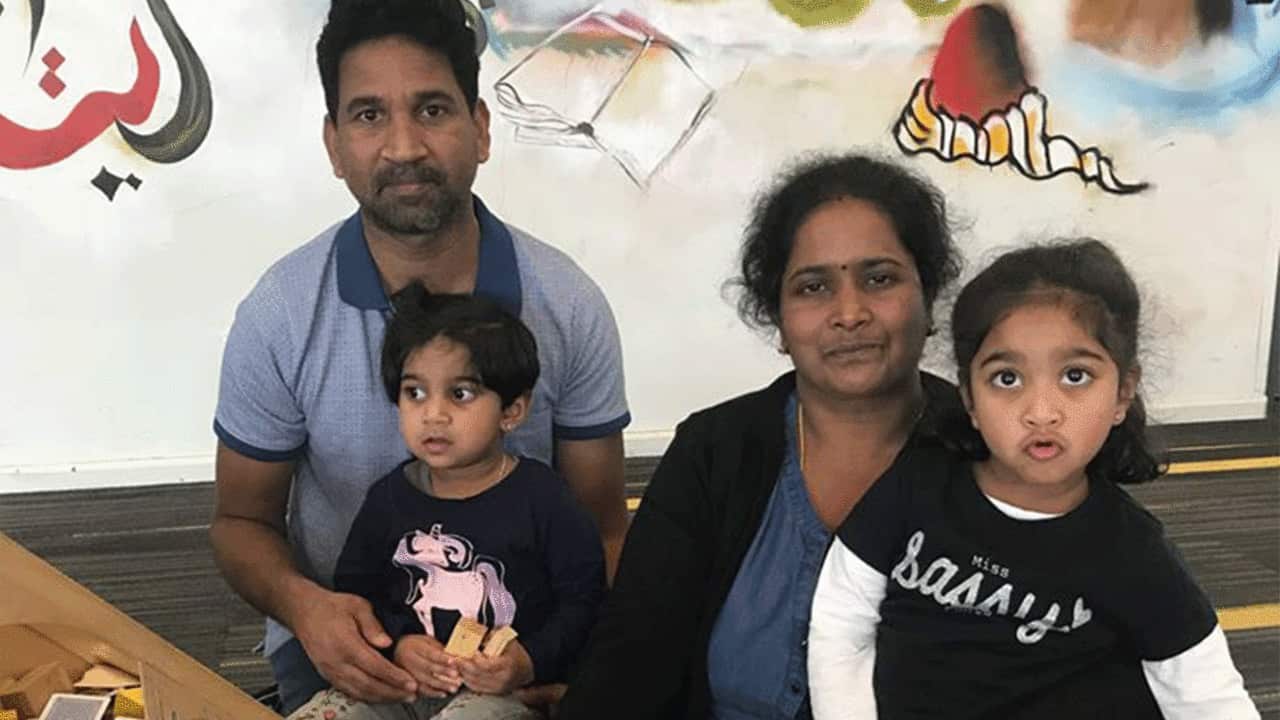 The Tamil family from Biloela detained on Christmas Island may have won a temporary reprieve, but a huge legal cloud around their long-term future still hangs over their heads.

Immigration Minister Alex Hawke on Tuesday morning announced
the Murugappan family would be released from Christmas Island to be with youngest daughter
- four-year-old Tharnicaa -
who was rushed to hospital in Perth last week with a blood infection.

Although the family's supporters welcomed the move, which will see the family undergo a "placement" in community detention in Perth, significant legal hurdles remain before the Murugappans can consider their future in Australia.

Advertisement
Mr Hawke said on Tuesday his intervention made no further guarantee of permanent resettlement.

“Their immigration status has not changed,” he said in Canberra.

The Murugappan family were detained by Australian Border Force officers in the small Queensland town of Biloela on 5 March, 2018.

Parents Nades and Priya had overstayed their bridging visas, which they were granted after arriving separately in Australia by boat in 2012 and 2013.

They have said they will face persecution if returned to Sri Lanka, due to Nades’ links to the banned Tigers of Tamil Eelam organisation.

Australia's legal system has so far rejected the protection claims of Priya, Nades, and eldest daughter Kopika, with Tharnicaa's right to apply for protection becoming the family’s last chance at resettlement in Australia.

'There needs to be a shift'

Mr Hawke also has the power to intervene in the family’s case through his own ministerial review of their situation.

But he has so far refused to wade into things, saying he is continuing to assess evidence before him.

The review involves the minister assessing whether to allow the family to apply for a visa regardless of past court decisions.

Another avenue open to the government is nominating visas for the family in the public interest, which can be done under section 195A of the Migration Act.

Meanwhile, Mr Hawke is also considering revoking a rule that currently stops children of so-called "illegal arrivals" from applying for protection visas, even if they were born in Australia, like Kopika and Tharnicaa were.

The family’s lawyer Carina Ford said Mr Hawke has the power to intervene in the family’s situation - irrespective of ongoing legal action.

“Clearly what’s coming through is there needs to be a shift in how the government looks at this case - I’m not so certain we’re there yet,” she told a media conference on Tuesday.

“It still is in the minister’s hands and the government’s hands to consider maybe a fairer approach.”

The family was first taken into detention in March 2018, then moved to Christmas Island in August 2019, after a last-minute court injunction blocked their deportation to Sri Lanka.

They lost their attempts to gain refugee status in Australia in May 201,9 when the High Court refused to let them appeal against a deportation decision.

The Federal Court later decided Tharnicaa had been denied procedural fairness, prolonging the family’s legal fight with the government.

The parties are now applying for the matter to be heard in the High Court.

Tharnicaa has been transferred to Perth for medical treatment. Her mother, Priya, has travelled with her. Source: SBS

The family's supporters are pleading with the government to let the family return to Biloela.

“This is a step forward but it's not quite the result we were hoping for,” Ms Ford said of Tuesday's announcement.

Aron MyIvaganam from the Tamil Refugee Council said the government's move was not one of compassion, but "an act of concession" stemming from public pressure.

"The government is basically sending this family from one detention to another detention," he said. "This is not freedom. We will continue our fight until this family is fully freed. Their home is in Biloela."

The government’s response to the family’s plight comes after a growing number of backbench government MPs voiced their concern.

There also remains resistance within the government to a permanent resettlement option as it stands by its tough stance on asylum seekers arriving in Australia by boat.

“The Australian government makes clear in everything we do that we are not weakening our resolve on our border protection,” Mr Hawke said.