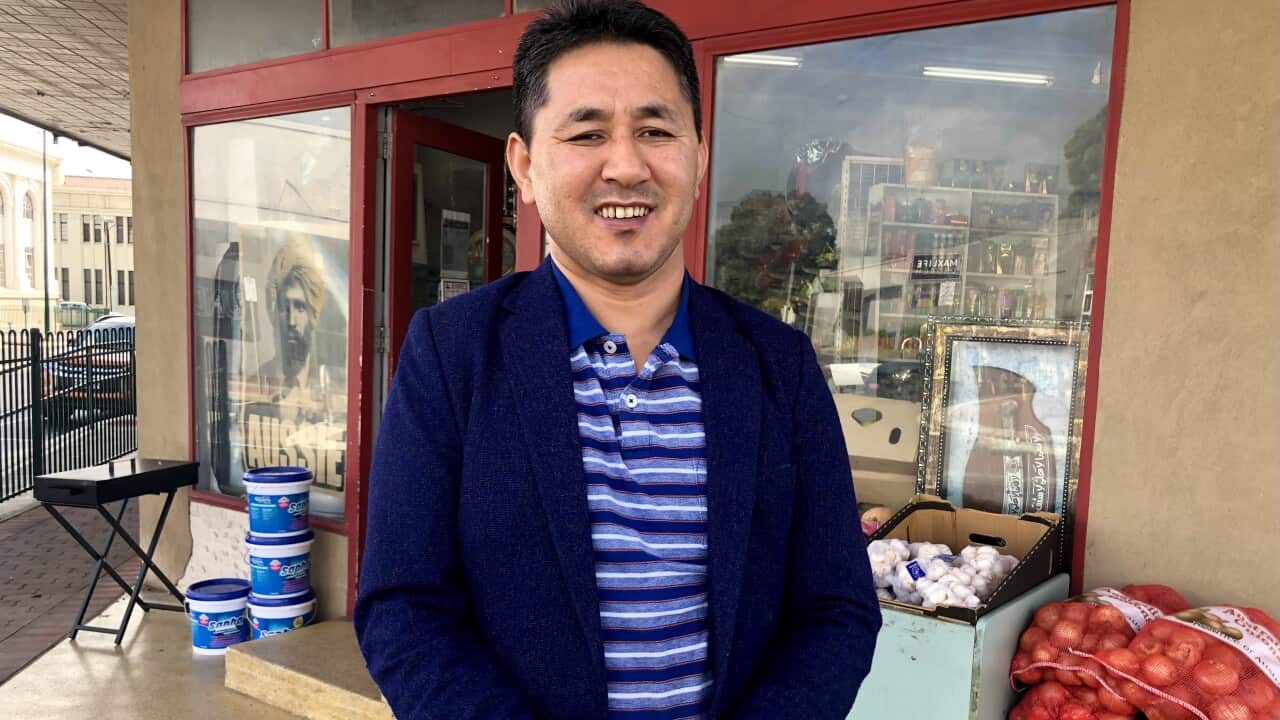 Didar is losing his sight, so he relies on the customers in his shop for their honesty

Didar Ali escaped the Taliban after his parents' murder and now runs an Afghan grocery in the South Australian town of Naracoorte.

The Hazara refugee owns the Daily Market, an Afghan grocery in the South Australian town of Naracoorte, halfway between Melbourne and Adelaide.

Since opening the shop seven years ago Didar's sight has gradually deteriorated to the point where he now relies on his customers paying the right price.
Advertisement
“If sometimes I make a mistake, they tell me, 'this is not right', and then explain for me," he says.

“There are many honest people. All Australia is honest and Naracoorte is the best.”

There are many honest people. All Australia is honest and Naracoorte is the best. - Didar Ali

Didar has retinitis pigmentosa, a rare genetic eye condition that causes cells in the light-sensitive retina to degenerate progressively, to varying degrees.

“We just see in white, or black, that’s it. Not much the colour," he says.

"All the doctors couldn’t find a [treatment] for this problem.”

Didar has learnt to stack shelves in the shop by the feel of the products he stocks.

Didar fled Afghanistan after his parents were murdered by the Taliban.

“When we ask 'why this is happening, and why you are killing?' [They say,] 'because you are Hazara'.”
Hazaras are an oppressed ethnic group in Afghanistan.

Fearing for his life, Didar fled to Indonesia, from where he began a dangerous boat voyage to Australia.

“Very, very hard to come by boat [but] better than staying in Afghanistan and the Taliban kill you,” he says.
READ MORE
Calls for Australia to increase aid to Afghanistan amid warning of a major humanitarian crisis
He was among 40 people at sea for 12 days before the boat broke down and began to sink.

“At that time, I was very happy to see the army come and catch my group.”

"If we weren’t rescued, within a couple of days everyone on the boat would have drowned."

The area where Didar lives has a growing multicultural community and he says some customers drive from more than 100 kilometres away to buy hard to find ingredients in his shop.

He has learnt to greet them with a few welcoming phrases in many of the 40 languages spoken in the region.

“Didar is good and nice. I like Didar," she says. “We can’t cheat Didar because he can’t see.”
Didar, a father of four, has built a new life for his family in Naracoorte. After working in the local meatworks, he opened his own business in 2014.

With up to 90 per cent of his sight now gone, Didar’s wife Basbanoo and their nine-year-old daughter Raihana have become integral to daily operations in the shop.

“He’s always kind and he’s incredible,” Raihana says. “Even if he has problems with his eyes, he still works.”

Even if he has problems with his eyes, he still works. - Raihana, Didar's daughter

Didar works seven long days behind the counter, and after school, Raihana helps out.

“Sometimes I spell things for him. I tell him the prices and I tell him how much money they [customers] gave him."

Didar, though, holds grave fears for his siblings who remain in Afghanistan amid the takeover by the Taliban last month.

He has not been able to reach them by phone since the Taliban took their village.

Didar is hopeful his application to bring his siblings to Australia will be approved.
Didar longs to reunite with his siblings. Source: Peta Doherty/SBS News
The Australian Migrant Resource Centre (AMRC) says family support will be essential to guarantee the shop’s survival in the future.

“It would be a real shame if he closed his store because that would leave a real gap in the market throughout the Limestone Coast area,” says AMRC Naracoorte manager Frances Kirby.

Didar is also a leader in the local Hazara community, which makes up almost four per cent of Naracoorte’s population, according to the 2016 census.
READ MORE
Why doing the 2021 Census matters for migrants in regional Australia
He ran for regional council, hoping to give back to the diverse community that has offered him its support.

“It doesn't matter that he wasn't elected,” Ms Kirby says.

“But he was the first person from a multicultural background willing to stand for this regional council.”

The Australian government has joined calls urging people wanting to flee the Taliban to be guaranteed safe passage out of Afghanistan.

Australia has also announced $5 million in funding to the United Nations High Commissioner for Refugees’ appeal to assist asylum seekers fleeing the country.

Would you like to share your story with SBS News? Email
yourstory@sbs.com.au
READ MORE
As the situation deteriorates in Afghanistan, here's what you can do to help
Share
Tags
ArtsAustralia