The 2022 Australian of the Year says there needs to be greater recognition of people with disability across Australia. 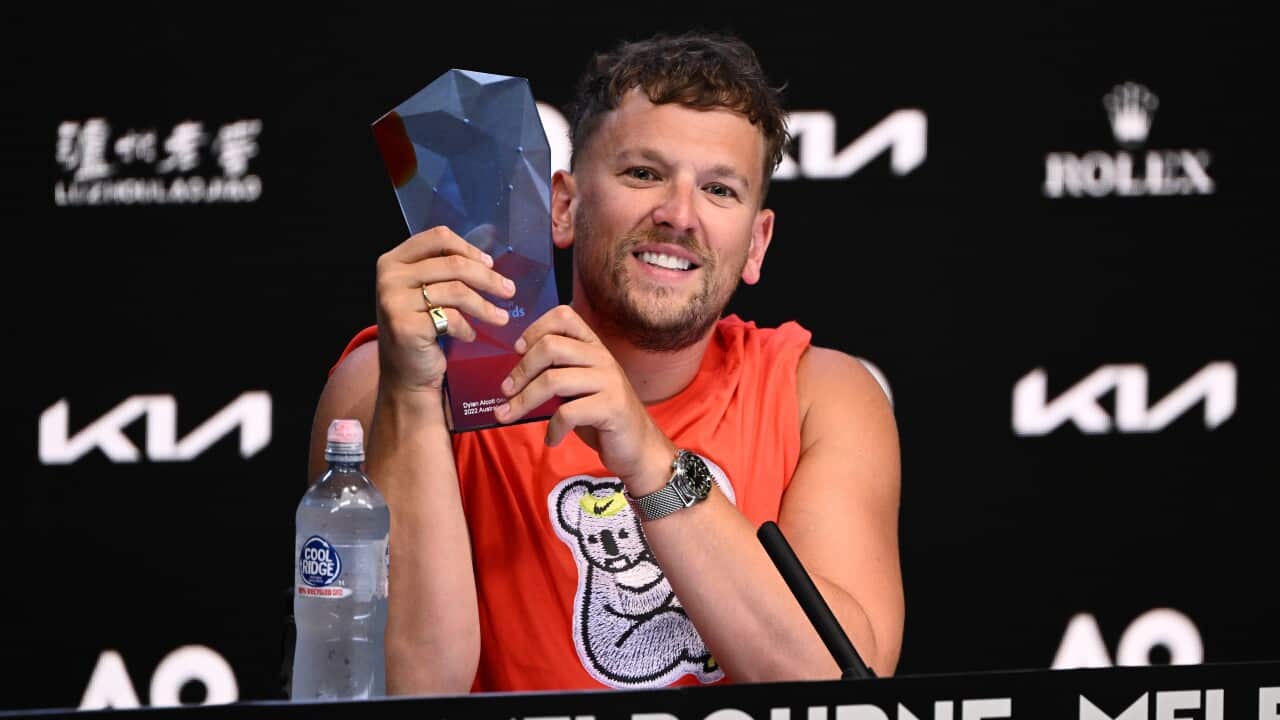 Dylan Alcott speaks to the media at Melbourne Park after being crowed the 2022 Australian of the Year. Source: Getty Images AsiaPac

The 2022 Australian of the Year Dylan Alcott has called for guaranteed funding of the National Disability Insurance Scheme (NDIS) and free access to rapid antigen tests (RATs) for people with disability.

The tennis star and disability advocate’s appointment to the role on Tuesday night has elevated the concerns ahead of this year’s federal election, alongside a call for greater recognition of people with disability.

Alcott spoke to reporters at Melbourne Park on Wednesday, describing himself as an “emotional wreck” after receiving the honour the night before.

Asked about his priorities moving forward, the Paralympian emphasised the need for access to free RATs for those most vulnerable to the COVID-19 pandemic.

“If we have got to give you - your family - your support workers a daily RAT test for free so you feel comfortable living - let's do it,” he said on Wednesday.

The federal government this week announced it would allow NDIS participants to use their core funding to buy the tests.

It has also allowed concession card holders to gain free access to the devices, which it claims includes the majority of NDIS participants.

But advocates have continued to raise concerns about the response, with the government scheme only covering around 10 per cent of people with disability.

People With Disability Australia president Samantha Connor said greater access to RATs needed to be secured for people at risk.

“It doesn’t make sense not to make sure that we allocate people with rapid antigen tests,” she told SBS News.

“When people have significant risks, that’s when their needs for more protection comes into play."

Alcott has also called for guaranteed funding to the NDIS moving forward as part of a push to empower people with disability.

“We have got to fully guarantee and fund the NDIS so we invest in people with disability so they can be the people they want to be and start paying taxes, not get pensions,” he told reporters.

The Coalition has committed to fully funding the NDIS, but has also raised concerns about the future cost of the program saying the use of taxpayer funding cannot be unlimited.

Alcott in 2019 also said he had been devastated when it emerged there had been a $4.6 billion underspend on the NDIS and called on the government to “fix it”.

The federal government has since pledged $13.2 billion over the next four years for the NDIS during the latest May budget.

This came as forecasts showed that supports covered by the scheme are predicted to reach a cost of $31.9 billion in 2024-25 as demand for the program increases.

The government was also forced to abandon proposed reforms to the program last year, which advocates had said were aimed at cost-cutting.

Labor’s disability spokesperson Bill Shorten has previously accused the government of placing the scheme - which supports some 450,000 people - at risk because of
neglect and vandalism
.

Ms Connor said a bipartisan effort was needed to secure the future of the NDIS, saying not providing adequate resources would be comparable to questioning the funding of Medicare.

“Australia has a responsibility to provide the necessary care and support just as they do necessary medical treatment to Australians,” she said.

Alcott said he wanted to use the platform as Australian of the Year to continue his “purpose in life” of changing “perceptions so people with disability can live the lives they deserve to live.”

“There are so many things we can do to make sure they get those opportunities,” he told reporters.

“People with disability are ready to go - it’s you non-disabled people who need to start changing your unconscious biases.”

He said this included the need to increase "employment opportunities" for people with disability with the workforce participation rate at 54 per cent of 4.5 million with disability.

Alcott will play in the final of the quad wheelchair singles at the Australian Open on Thursday.