Paralympian Dylan Alcott, long-term volunteer for St John Ambulance Valmai Dempsey, and founder of a healthcare service for people experiencing homelessness Dr Daniel Nour are the Australians of the Year for 2022. 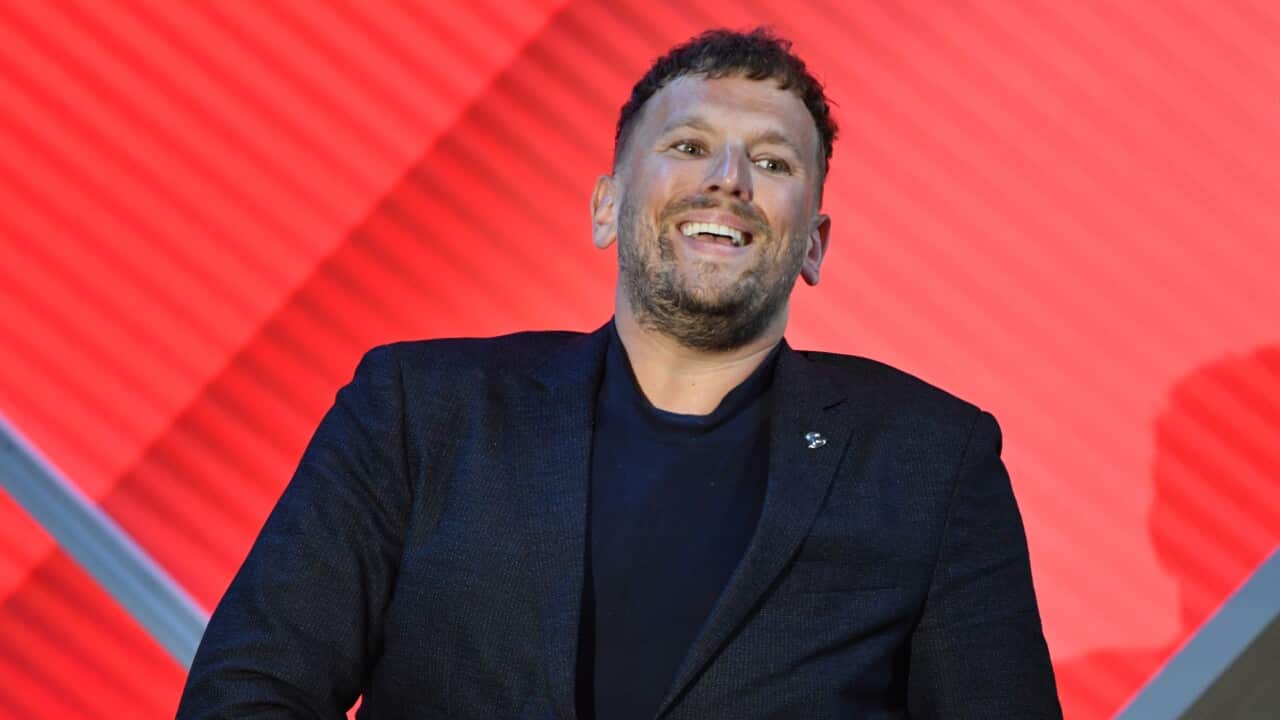 Dylan Alcott is the 2022 Australian of the Year. Source: AAP

One of Australia's most recognisable sports stars, Dylan Alcott, has been crowned with the nation's top honour.

Last year, the wheelchair tennis champion made history by becoming the first man in any form of tennis
to achieve the 'golden slam'
after winning all four major singles titles and a gold medal at the Paralympics in one season.

And on Tuesday, Mr Alcott, 31, once again made history by becoming the first person with a visible disability to be named Australian of the Year since the award program launched 62 years ago.

Advertisement
"Winning grand slams and gold medals isn't my purpose. It's like, the 30th priority of my life," Mr Alcott said as he accepted the honour in Canberra on Tuesday night.

"My purpose is changing perceptions so people like me can get out there and live the lives they deserve to live.

"It was my purpose yesterday, today and my purpose as your Australian of the Year for the next 12 months and beyond."

Mr Alcott added: "I love my disability. It is the best thing that ever happened to me. It really is. And I'm so thankful for the life that I get to live."

Mr Alcott said he hadn't considered himself a chance for the top award until he arrived and saw a ramp to the podium.

"Standing ovations are one of the most ironic things in the world, by the way," he quipped.

"The last two years have been so tough on so many people and to," he said.

"I feel honestly ridiculous being here. To our front-line workers, our nurses, our doctors, people running our vaccines, ambulances, firefighters. You deserve this much more than a guy who hits tennis balls and loves talking."

Mr Alcott also paid tribute to outgoing Australian of the Year Grace Tame, who used the evening to promote the Grace Tame Foundation, tasked with combating the sexual abuse of children.

"Tame, you are fierce and I love it. And you have done so much for your cause and if I could be an eighth of the Australian of the Year that you were, I think I've done my job."

“Dylan Alcott is a champion who has risen to the top of the world rankings through sheer grit and determination. His golden slam is an incredible feat, the first for any male tennis player,” Ms Roche said in a statement on Tuesday.

“Dylan is an inspirational Australian on and off the tennis court. Through the Dylan Alcott Foundation, he is giving young Australians facing disadvantage the promise of a better future,” she added.

Valmai Dempsey is Senior Australian of the Year

Valmai Dempsey, 71, from Canberra has been volunteering for St John Ambulance for more than half a century.

Lovingly referred to as “Aunty Val”, Ms Dempsey has always been there for her community – from offering much-needed support to bushfire-affected families to personally checking in on other volunteers during the COVID-19 pandemic to make sure they were mentally and physically “doing OK”.

Valmai Dempsey is the 2022 Senior Australian of the Year. Source: AAP

"I believe holding out a hand to someone, or taking the opportunities to be kind. make all the difference and come back to you 1,000-fold," she told the Australian of the Year Awards in Canberra on Tuesday night.

Ms Dempsey has set her sights on road safety and wants to see first aid training become compulsory for leaner drivers as it is in parts of Europe.

"Our family was forever changed by a car accident more than three decades ago where people came to help but didn't know what to do," she said.

"As a nation, we can rethink our approach to those critical minutes between life and death at a road accident."

"She has donated her time to the service of St John Ambulance for more than half a century, helping countless Australians," Ms Roche said.

Daniel Nour is Young Australian of the Year

Dr Daniel Nour was just 24 years old when he realised there was a gap in the healthcare system for vulnerable people in New South Wales.

Less than two years on, the service – with the help of 145 volunteers and four clinics across the state – has changed the lives of more than 300 people, treating communicable and incommunicable illnesses, such as diabetes, thyroid disorders, hepatitis C, HIV, heart disease and cancer.

“Dr Daniel Nour and Street Side Medics work to make sure no Australian gets left behind, providing vital medical care and lifesaving treatment to those experiencing homelessness and who might otherwise fall through the cracks,” Ms Roche said in the statement.

In his award speech, Dr Nour said "as we all sit here tonight, there are over 116,000 Australians who are experiencing homelessness".

He said many of these people faced "significant barriers" when trying to access healthcare.

"As a result of this, they suffer in silence," he said.

He recounted several tragic stories of people whose lives could have been saved or improved if they had proper access to healthcare.

"I have seen 50-year-olds like Peter die of heart failure, struggling for a breath in the cold night air. I have seen people like 40-year-old Eddie, who's living with maggots in his wounds," he said.

"I have seen people like Neil, a 29-year-old Type 1 diabetic who is suffering from irreparable damage due to being unable to afford his insulin.

"As Australians, it's our responsibility to advocate for those who seem to have lost their voice and to rise up to the occasion, even when we question our own ability to do so."

Shanna Whan gave up drinking after almost losing her life to alcohol addiction in 2015.

Determined to help others struggling with alcohol, Ms Whan launched Sober in the Country – a grassroots charity offering peer support, education and advocacy through its “OK to say no” to booze campaign.

The 47-year-old from Narrabri in northern NSW has single-handedly created radical social impact and change around how we discuss and use alcohol in rural Australia.

“Shanna is an inspiring and tireless local hero who not only overcame her own life-threatening challenges, but turned the experience into a force for good. Her Sober in the Country movement is changing lives across remote and rural Australia,” Ms Roche said in the statement.

Ms Whan said on Tuesday night "alcohol use is the silent pandemic we are not discussing".

"And it's a pandemic that is exploding exponentially with COVID-19, no matter your postcode," Ms Whan said.

"Addiction looks the same all over the country. But what you might not know is that rural people are 150 per cent more likely to suffer from alcohol harm and only 17 per cent of us will get the help we need," she said.

She said life in rural Australia "is permanent [isolation]".

"We've always got plenty of beers in the fridge, but we've never really got enough services or support close by," she said.

"That was my reality, and that's the reality of the people I'm fighting for. And rural people are worth fighting for because they get up and they show up in fire and flood and droughts and plagues and pandemics. And they put food on the nation's table.

"So the least we can do as a nation is make sure that they're getting support when they look for it."