After years of legal battles, the Nadesalingam family have been granted permanent residency. Here's how they got to this point. 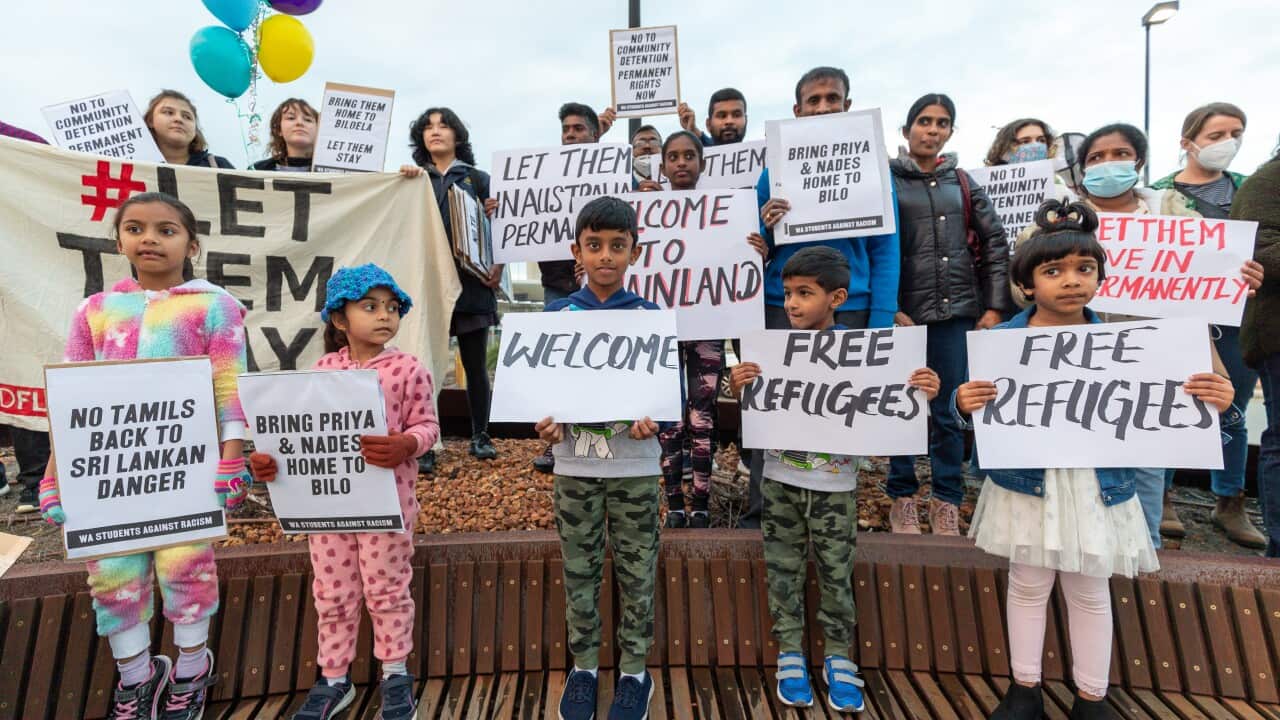 Supporters of the Nadesalingam family protesting their detention in Perth on 15 June, 2021. Source: AAP / RICHARD WAINWRIGHT/AAPIMAGE

The Nadesalingam family, affectionately referred to as the 'Biloela family',
have been granted permanent visas
by Australia's Labor government.

The decision comes after years of public legal battles, advocacy, and detention following their 2018 removal from the central Queensland town they had made their home.

The Tamil asylum seeker family, also known as the Murugappans, said they would face persecution as Tamils if deported to Sri Lanka.
Advertisement
But the previous federal government said they did not meet refugee requirements.

Over the past five years, the family has become arguably the most high-profile asylum seeker case in Australia.

Here's how we got to this point.
READ MORE
Nadesalingam family touch down in Queensland on their journey home to Biloela

In 2012, Nadesalingam Murugappan - known as Nades - arrived via a people smuggler boat.

Nades had previous links with the Liberation Tigers of Tamil Eelam (LTTE), which the family and their advocates say would make him "almost certain" to face persecution if he returned to Sri Lanka.

Nades sought asylum and was released from detention on a bridging visa while his application was being assessed.

He later sought a permanent protection visa but his application was rejected.

In 2013 the federal magistrate's court knocked back his appeal and in 2015 the High Court denied his leave to appeal the decision.
Nades arrived in Australia 10 years ago Source: Supplied / Supplied/HometoBilo

Kokilapathmapriya - known as Priya - arrived in the Cocos Islands on a people smuggler boat.

Priya had left Sri Lanka in 2001 to go to India. She said she had fled due to the war and her family being targeted. In 2013, she travelled to Australia where she met Nades.

She sought asylum and also received a bridging visa while her application was being assessed.
READ MORE
'Save these people': Friends of Sri Lankan family facing deportation urge Dutton to intervene

In 2014, Nades and Priya married and settled in Biloela.

In 2015, Nades and Priya's first daughter Kopikaa was born.

That year, Priya's application for a Safe Haven Enterprise Visa, which would have allowed her to stay in Australia temporarily for five years, was rejected and subsequent court appeals in 2018 and 2019 were rejected.
Tharnicaa, Nades, Priya and Kopika Murugappan (L-R). Credit: Supplied / Stephanie Coombes

On Monday 5 March, Australian Border Force officials — accompanied by police and Serco private security guards — arrived at the family’s home in Biloela and removed them due to Priya's visa expiring.

They were then moved to a Melbourne detention centre, and later Christmas Island, and were issued with deportation notices in June after the federal government ruled they could not stay.
READ MORE
Tamil asylum seeker family to be deported to Sri Lanka next year
The Biloela community and numerous social justice advocacy groups
rallied around the family
, with more than 190,000 Australians signing a petition urging then-Home Affairs Minister Peter Dutton to return the family to Biloela.

Priya appealed, and the family's deportation was put on hold while the appeal was being considered. The appeal was rejected by the Federal Court in December, with the judge ordering the family to be deported, but not before February 2019.
The Murugappan couple Priya and Nadesalingam with their Australian-born children Kopika and Tharunicaa. Source: Supplied
Throughout the appeals, the department said they consistently found the family's case did not meet Australia's protection obligations.

In May 2019, the High Court denied the family's final appeal to stay. Friends from Biloela travelled to Sydney to deliver the petition to then-federal Immigration Minister David Coleman.
READ MORE
Petition supporting Tamil family delivered to Immigration Minister
In August, the family was put on a plane to be deported. However, at the last minute, their deportation was blocked due to an injunction lodged by solicitors. The injunction was granted as Tharnicaa had not yet been assessed for a protection visa, and therefore could not be deported.

The plane landed in Darwin, and the family was transported back to Christmas Island.

In 2020, while Tharnicaa's case and visa were being assessed, the family were detained on Christmas Island.

In April, the Federal Court ruled that the family's youngest daughter
was not given procedural fairness
when the government considered lifting a bar preventing her from applying for a visa.

During the coronavirus pandemic,
the family expressed concerns over protective measures
and exposure to COVID-19 from guards.

In 2021, Tharnicaa had to be evacuated from Christmas Island for
medical treatment following a b
lood infection.

Priya, Nades and seven-year-old daughter Kopika were granted bridging visas allowing them to remain in the country, but Tharnicaa was not, forcing the family to
remain in community detention in Perth.

In the lead-up to the 2022 federal election, the Labor Party made the promise that if elected, they would allow the family to return to Biloela.

On 27 May, new treasurer Jim Chalmers — who was interim home affairs minister at the time — announced he had used ministerial intervention powers to enable the family to return to Biloela, where they could reside lawfully in the community on bridging visas while awaiting the of the resolution of their immigration status.
READ MORE
'I cannot believe it': Murugappan family's joy after Labor confirms Biloela return
A crowdfunding campaign raised over $200,000
to help the family "get back on their feet" when they arrive home, and an interstate investor reportedly offered for the family to live in his Biloela house rent-free for six months.

On Wednesday 8 June the Nadesalingam family left Perth and arrived in Brisbane later that day, before flying to Biloela on Friday 10 June.

There were
emotional scenes at Thangool Airport where they were greeted by supporters
, many of whom had campaigned for years for their release.
Priya and Nades Nadesalingam and their daughters Kopika and Tharnicaa arrived at Thangool Airport in Biloela in June. Source: AAP / DARREN ENGLAND/AAPIMAGE
Over the weekend, they were guests of honour at the town's Flourish Festival and celebrated Tharnicaa's fifth birthday - her first out of detention - with a party in the park.
At the Flourish Festival, immigration lawyer Carina Ford indicated she expected the family would soon receive permanent residency.

Earlier, Home To Bilo campaigner Bronwyn Dendle said the “wheels were in motion”, while prime minister Anthony Albanese said there was "no impediment" to the family settling in Biloela permanently.

On Friday 5 August, it was announced the family had been granted permanent visas by the federal government.

Immigration Minister Andrew Giles exercised his special ministerial powers and intervened in their case.
"At last we feel peace. I am so grateful to Minister Giles for granting us this permanency," Priya said on Friday afternoon.

"Now I know my daughters will get to grow up safely in Australia. Now my husband and I can live without fear. This is a very happy day for our family and for all the people of Biloela and Australia who have supported us."
Share
6 min read
Published 10 June 2022 at 6:29am, updated 5 August 2022 at 8:39pm
By Jessica Bahr
Source: SBS News