Future of Nauru children unclear as transfers to Australia continue

More children have been transferred from Nauru to Australia. 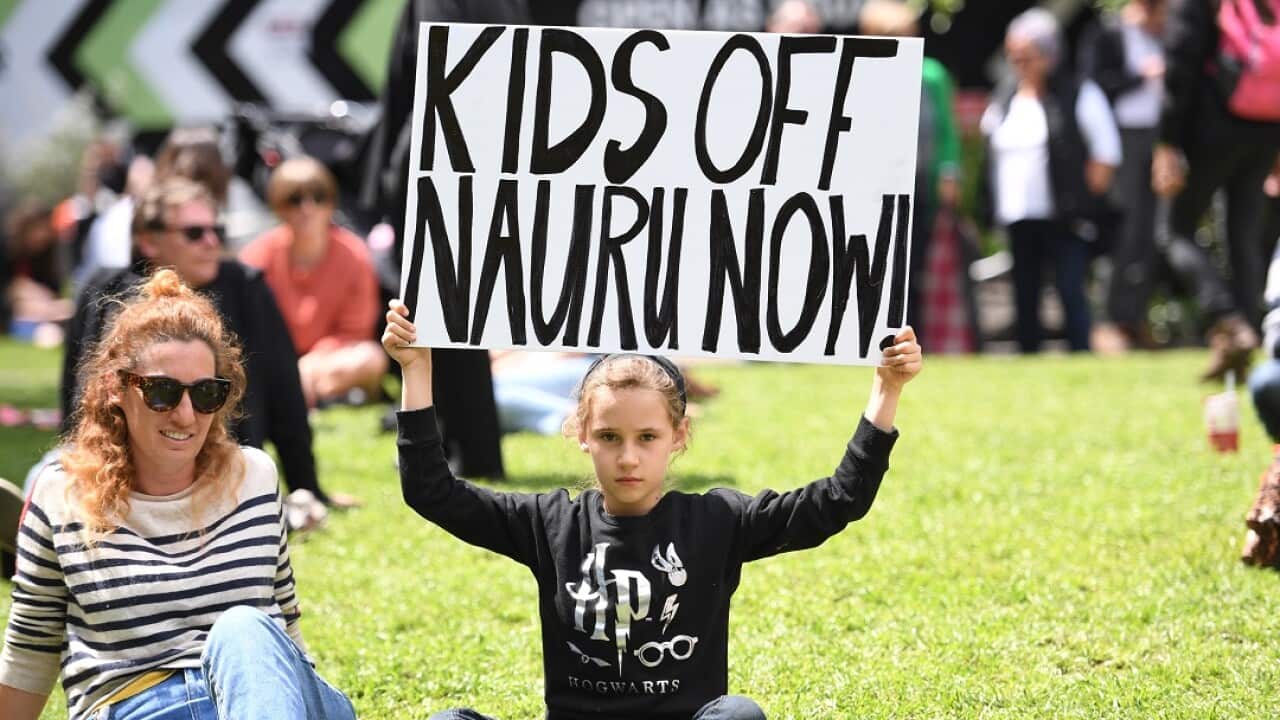 Children are among the Australians taking to the streets to call for an end to the offshore detention policy. Source: AAP

Fewer than 40 asylum seeker children now remain on Nauru as the federal government continues to quietly transfer families to Australia for medical treatment.

Refugee advocate Ian Rintoul said a number of groups arrived in Adelaide earlier this week, while others had been sent to capital cities across the country.

Advertisement
A spokesperson for South Australia’s Health Minister, Stephen Wade, confirmed as many as a dozen children have received treatment at the Women’s and Children’s Hospital in Adelaide since September, but that only a few remained there as of Tuesday.

They declined to comment further, saying the children were now under the guardianship of the Department of Home Affairs.

Mr Rintoul, from the Refugee Action Coalition, welcomed the apparent change of direction from the federal government.

“Previously, they were quite willing to separate families, to break up families between Nauru and Australia, but recently we’ve been getting family units moved together.”

The island of Nauru. Source: AAP

Prime Minister Scott Morrison has been under increasing pressure from parliamentary colleagues, and the public, to remove asylum seeker children from Nauru, confirming yesterday the secretive transfers have taken place “quietly”.

“In the last nine weeks, the number of children on Nauru has halved, so we’ve been getting about this quietly, we haven’t been showboating about it,” he said.

He said children who remained there were not living in detention.

“There are no children in Nauru living in detention, they live in the community like Nauruan children do.”

Assistant Minister for International Development and the Pacific, Anne Ruston, said the government is still negotiating with the United States over a resettlement deal, and the move was not a sign of softening on border policy.

“What we can't do is go back to the bad old days, where people-smuggling syndicates opened up pipelines to Australia, resulting in at least 1200 people dying at sea. And that's the ones that we know about,” she said.

Brad Chilcott, founder of refugee and asylum seeker advocacy group Welcome to Australia, said most of the children who had received medical treatment in Australia were now in community detention.

“I’m pleased when anyone has a slight hope for a better life, but it’s really concerning that these families, even though they are here, don’t know what happens next,” he said.

“By definition, there is no ending to the detention we’ve placed them in.”

Some families are already seeking legal action in a bid to avoid going back to Nauru once children undergo urgent medical treatment, Mr Rintoul said.

He believed the transfers were taking place quietly because the government is "acutely embarrassed" about the situation and wanted to maintain its "political face".

Health professionals have ramped up their pleas in recent weeks for the government to intervene, with the Australian Medical Association handing a letter signed by about 6000 doctors to Mr Morrison.