The 110-year-old statue in Randwick was painted with the words "no pride in genocide" over the weekend. 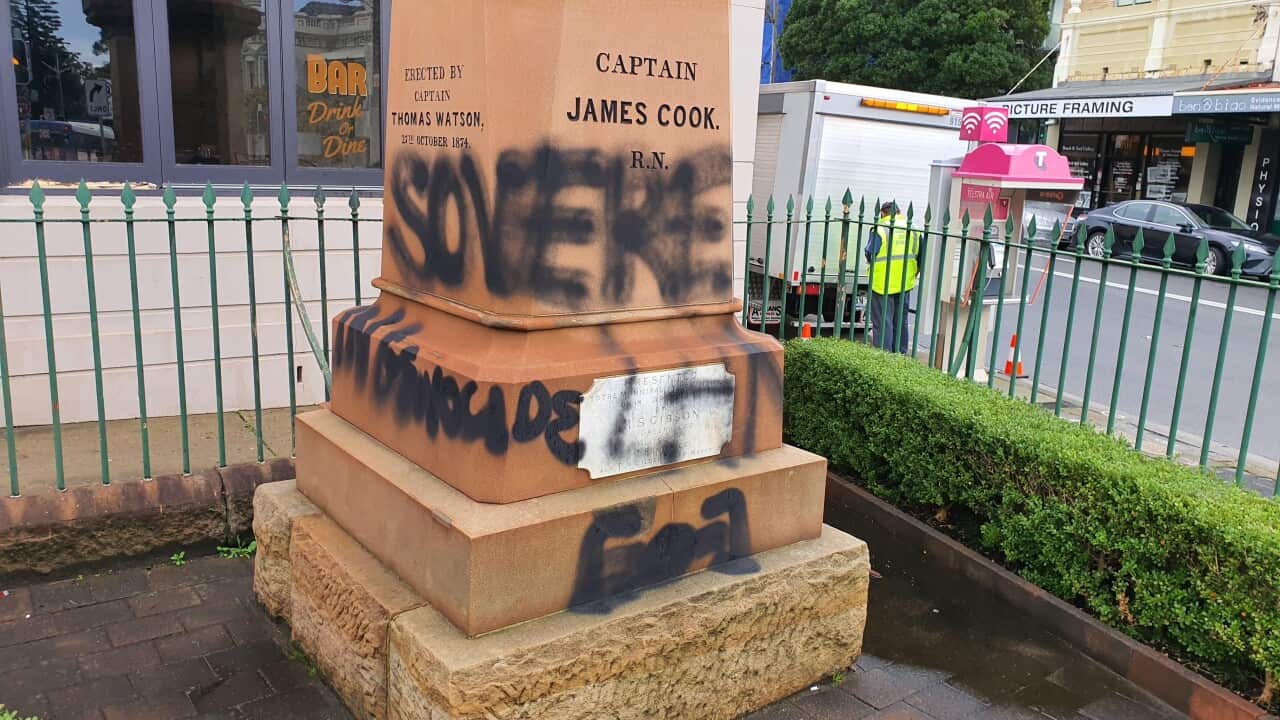 The New South Wales government is considering tougher anti-vandalism laws after a second Captain James Cook statue was defaced in Sydney over the weekend.

Police are calling on the public for information after the statue in Randwick was spray-painted with the words "no pride in genocide", "ACAB [All Cops Are Bad]", and the Indigenous flag between 8pm on Saturday and 8.45am on Sunday.

The graffiti was removed by Randwick City Council on Sunday, the same day two women were granted bail in Parramatta Bail Court after being accused of spray-painting a Captain Cook statue in Sydney's Hyde Park.

Advertisement
Police surround a statue of James Cook in Hyde Park during a protest. Source: Facebook

Charmaine Morrison-Mills, 27, and part-time Greens staffer Xiaoran Shi, 28, were charged with destroying or damaging property and possessing a graffiti implement after police were alerted to the graffiti at around 4am on Sunday.

Premier Gladys Berejiklian described the behaviour as un-Australian on Monday and urged people to express their views in a different way.

"At the end of the day, we know it's just a minority of people who undertake this activity but ... it's disrespectful and it's wrong," she said.

She stressed significant penalties were in place for vandalism, while adding: "If we do need to go further we will".

The Randwick statue, located on the corner of Belmore Road and Avoca Street, is over 100 years old and the was first Captain Cook statue erected in NSW.

The defacing of Captain Cook statues is part of a global movement calling for the removal of "racist" statues spurred by protests against the death of George Floyd in the United States.

Some see Australia's Captain Cook statues as symbols of Indigenous dispossession and genocide.

A number of statues have been toppled across the world, including a statue of slave trader
Edward Colston which was thrown into a harbour in the United Kingdom city of Bristol
.

The widespread protest against police brutality against African Americans in the US has put a spotlight on Australia's own history of Indigenous deaths in custody.

At least 437 Indigenous Australians have died in police custody since the findings of the Royal Commission were handed down in 1991, according to The Guardian's
Deaths Inside database
.

Asked about whether it was appropriate to continue memorialising Captain Cook, Ms Berejiklian said it was important to respect "milestones which have made a difference in our history".