Just over a day after two fellow volunteer firefighters died, the Horsley Park Rural Fire Brigade was back fighting blazes on Saturday. 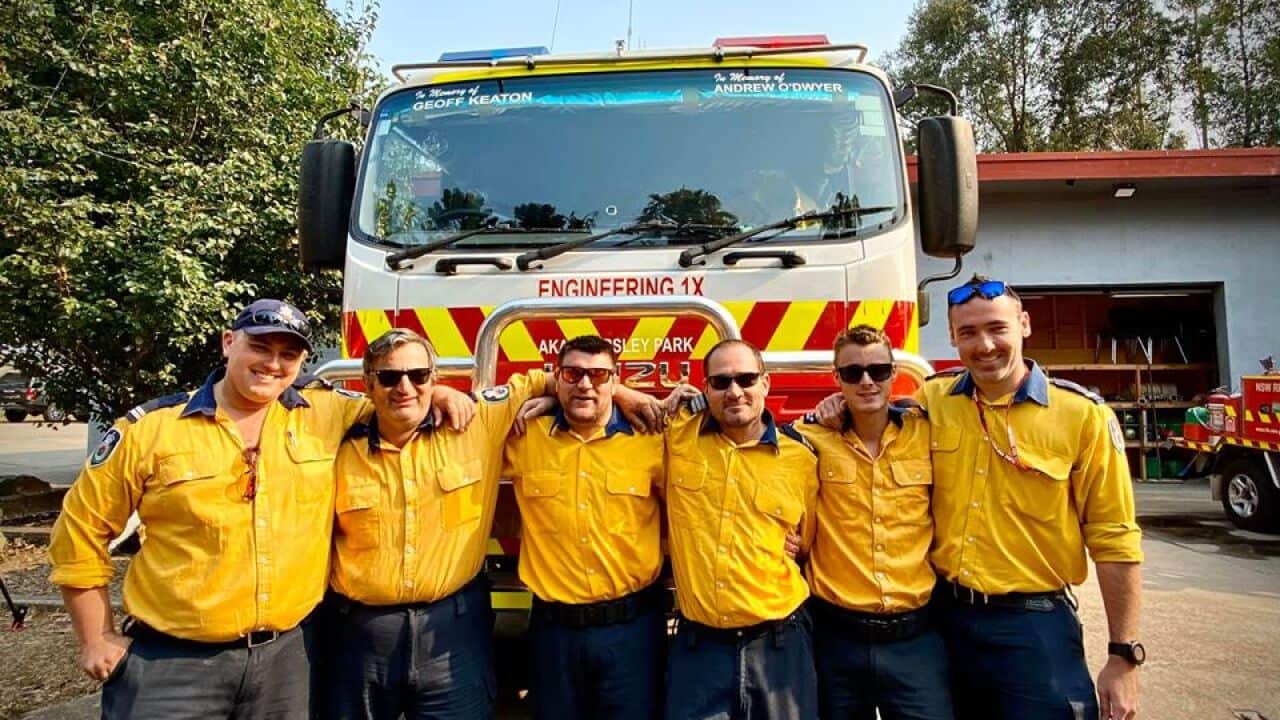 Just over a day after losing two of their close mates the Horsley Park Rural Fire Brigade was back fighting blazes on Saturday.

The deaths of Geoffrey Keaton, 32, and Andrew O'Dwyer, 36, when a falling tree caused their fire truck to roll, have rocked the tight-knit western Sydney community

Flags were flown at half-mast across the state on Friday for the two young fathers.

But on Saturday, members of the 68-strong brigade put aside their grief to get back on their trucks and help battle blazes amid catastrophic conditions.

The brigade had three crews fighting fires with their trucks emblazoned with "In memory of Geoff Keaton" and "In memory of Andrew O'Dwyer" on their fronts.

"In true Horsley Park spirit, our crew are heading out today as part of a Cumberland Zone Strike Team in memory of Geoff and Andrew," a post on the Horsley Park RFS Facebook page said.

Floral tributes are seen at a memorial for firefighters at the Horsley Park Rural Fire Brigade. Source: AAP

"To all crews in the field today, stay safe and look after each other."

NSW premier Gladys Berejiklian paid tribute to the 2000 volunteer firefighters who will be deployed across the state on Saturday, saying the death of Mr Keaton and Mr O'Dwyer had rocked them and their families.

"Especially after the tragic loss of Geoff and Andrew yesterday, our heart goes out to the volunteers who are in the field today," Berejiklian said.

"No doubt their loved ones will be worried about what they might face today as they leave the front door.

"We say our thoughts and prayers are with you, we're deeply grateful. And we appreciate today especially every firefighter, every loved one, every family member carries a heavy heart with them."

He renewed calls for volunteer firefighters to be compensated through tax breaks, one-off payments or special leave entitlements.

Flowers and the helmets of volunteer firefighters Andrew ODwyer and Geoffrey Keaton are seen at a memorial at the Horsley Park Rural Fire Brigade. Source: AAP

"They do not want to be there. They would rather be at home safe with their families," Mr Albanese said.

"I met one person yesterday who has worked every single day since September. He began fighting the fires at Tenterfield and he is now fighting to defend his local community.

"The problem with this government is that it does not seem to be prepared to acknowledge that this is not business as usual."