The Papuan province has been plagued by violence in recent weeks. 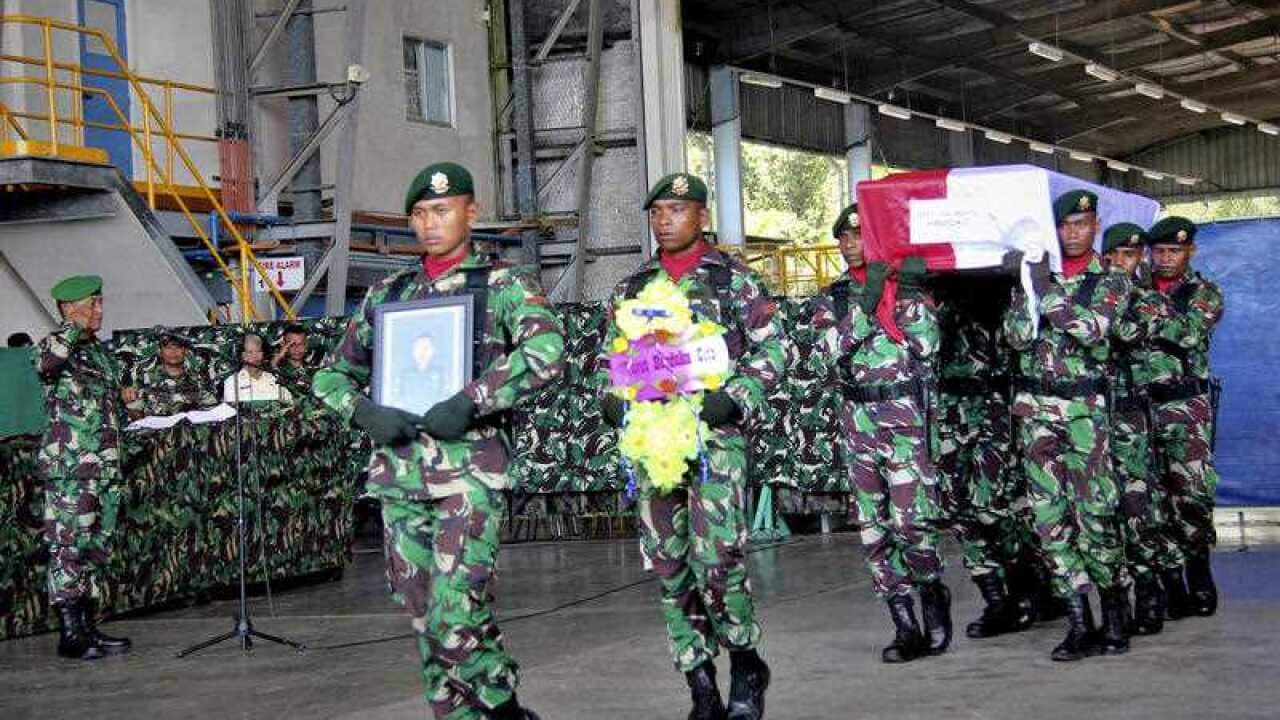 Indonesian soldiers carry the coffin of Sergeant Handoko who was killed in a separatist group's attack . Source: AAP

Indonesia has rejected renewed West Papuan separatists' demands for independence and the deployment of United Nations peacekeepers as the
death toll mounts after almost two weeks of fighting in the Papuan province.

At least 17 workers on a major highway construction project were killed 10 days ago in an attack claimed by the West Papua National Liberation Army, known at TPNPB.

The separatists claimed the men were Indonesian military personnel while Indonesian officials say the gunmen are violent criminals who must be held to account.

Advertisement
Indonesian soldiers carry the coffin of Sergeant Handoko who was killed in a separatist group's attack . Source: AAP

Gun battles erupted when the Indonesian military responded. At least four civilians reportedly died in the cross fire, with an unspecified number of soldiers and combatants also killed or wounded.

A civil conflict has raged since Indonesia’s annexation of the former Dutch colony and a disputed United Nations referendum in the 1960s, that has reportedly resulted in tens of thousands of deaths.

In a video, a spokesperson for the National Liberation Army read an open letter to Indonesian President Joko Widodo rejecting a call to surrender, demanding an end to Indonesian rule and an independence referendum.

“TPNPB will continue armed resistance without surrender and will continue to fight until full independence is achieved from Indonesia brutal colonialism,” Sebby Sambam said, while standing alongside Major Terianus Santos, head of staff for the National Liberation Army of West Papua, behind the Morning Star independence flag.

Indonesian troops prepare to be deployed to Nduga district where suspected separatists shot dead dozens of workers at a field in Wamena, Papua. Source: AAP

“Call on withdrawal of all Indonesian military forces out of Papua and bring in the UN peacekeeping troops.

Indonesia's top security minister, Wiranto, said on Tuesday the government will not open talks with those who have committed serious crimes.

"The enemy (TPNPB) have escaped and the authorities are still making an effort to run after them," said Wiranto, who goes by only one name.

"They have spread propaganda to scare people. They have committed inhumane crimes and we must fight against them."

Thousands of people have reportedly fled into the mountains in Nduga where the attack occurred as Indonesian forces retook strategic positions in the remote part of Papua.

Since coming to power in 2014, Widodo has tried to address the Papua issue by freeing some political prisoners, promising improved human rights and particularly by stepping up infrastructure investment, including through a Trans Papua road.

Many traditional land owners say the 4600km highway through Indonesia’s Papuan provinces is being built without their approval.

“This is a very tragic event and we hope that there will be an appropriate and serious comprehensive investigation of these events. They are of course a great concern,” Ms Payne told her Indonesian counterpart Retno Marsudi last Thursday.

Foreign media are restricted from entering the Papuan provinces to independently verify the situation.

Hundred of arrests have been made since the December 1 anniversary, which marks the raising of the banned Morning Star independence flag, sparking criticism from the UN in Geneva.

“While we acknowledge the complexities of the situation in Papua, we are troubled by the crackdown over peaceful demonstrations and increasing reports of excessive use of force by security forces, harassment, arbitrary arrests and detentions in Papua, including harassment and threats to lawyers working on these cases,” UN Office of High Commissioner for Human Rights (OHCHR) spokesperson Ravina Shamdasanin said.

“We urge the Government to act to constructively address the grievances being voiced in Papua in line with Indonesia’s international human rights obligations and the political commitments made in the Human Rights Council Universal Periodic Review.”

More arrests were made after pro-Papuan rallies on UN Human Rights Day on Monday.

The West Papua National Liberation Army, the military wing of the Free Papua Movement (OPM), declared a renewed war against the Indonesian army (TNI) on January 23 this year.