An infectious disease expert is urging that schools reopen for the next school term. 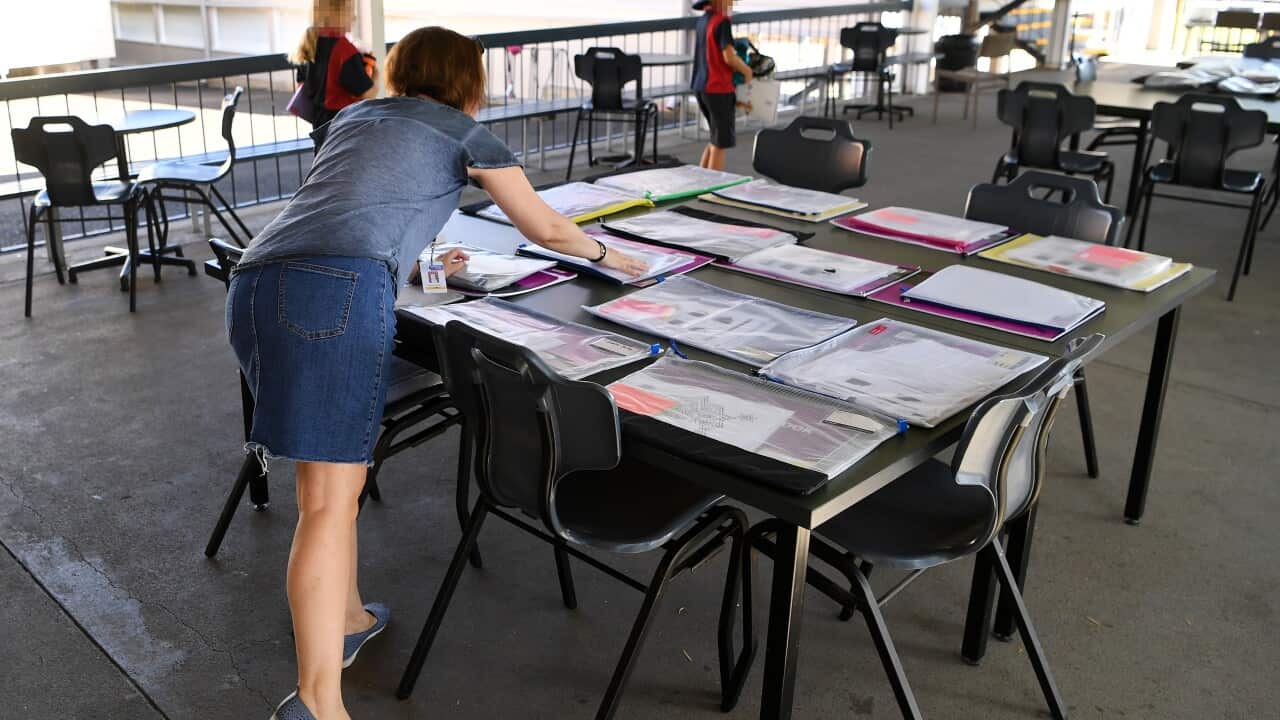 A teacher prepares a take-home activity packs at a primary school in Brisbane. Source: AAP

While the majority of students around Australia are currently on school holidays, the question of whether they should return for term two continues to linger.

Prime Minister Scott Morrison continues to insist schools remain open and Education Minister Dan Tehan has threatened to withdraw funding from independent schools if they do not re-open for the next school term.

But some
State Premiers, including New South Wales' Gladys Berejiklian
, have sent strong signals that parents should keep their children at home if they can.

“What’s the risk in closing schools for six months to a year when we find in retrospect, children weren’t much of a vehicle for spreading,” he told SBS News.

All the available evidence, Mr Collignon said, is that children under the age of 15 are rarely diagnosed with COVID-19 or at a high risk of having problems.

While children can go undetected and act as hosts in the same way adults can, Mr Collignon said the data suggests asymptomatic people make up a small fraction of overall transmission.

“When we look at outbreaks and cases in Australia, there’s a lot more testing of people even with very mild symptoms, so we can get an idea already how often they’re involved and the short answer is much less than people would have thought.”

According to data from the states and territories, Chief Medical Officer Brendan Murphy said he hasn’t seen significant incidents of student-to-teacher transmission.

In a press conference Sunday, Mr Murphy said, “we don’t think schools are a risk for children.”

“What we don’t know is the extent to which children might be transmitters – there just isn’t the data there.”

Mr Murphy advised teachers who are at risk not to be involved in situations at work - a sentiment shared by Mr Collingnon who believes we should be keeping at-risk teachers away from schools, not children.

“Those over the age of 50 with heart disease, lung disease... they need to stay away from other people but even children because we don’t know if they may be transmitting it but that doesn’t mean we have to keep everybody away from school and all teachers,” Mr Collingnon said.

A spokesperson from the Department of Education, Skills and Employment told SBS News, “the expert advice of the Australian Health Protection Principal Committee remains clear, that it is safe at this time for schools to remain open.”

On Sunday, Federal Education Minister Dan Tehan noted that the states and territories had put different arrangements in place, but “what the nationally consistent approach is, when it comes to parents who have to work and vulnerable children, schools have to be open and have to make sure that they provide a safe learning environment for those children,” Mr Tehan said.

SBS News has reached out to the Australian Education Union for comment.