Migrants stuck in Belarus are finding it harder to reach the European Union, and complain of being fleeced, then abandoned by smugglers. 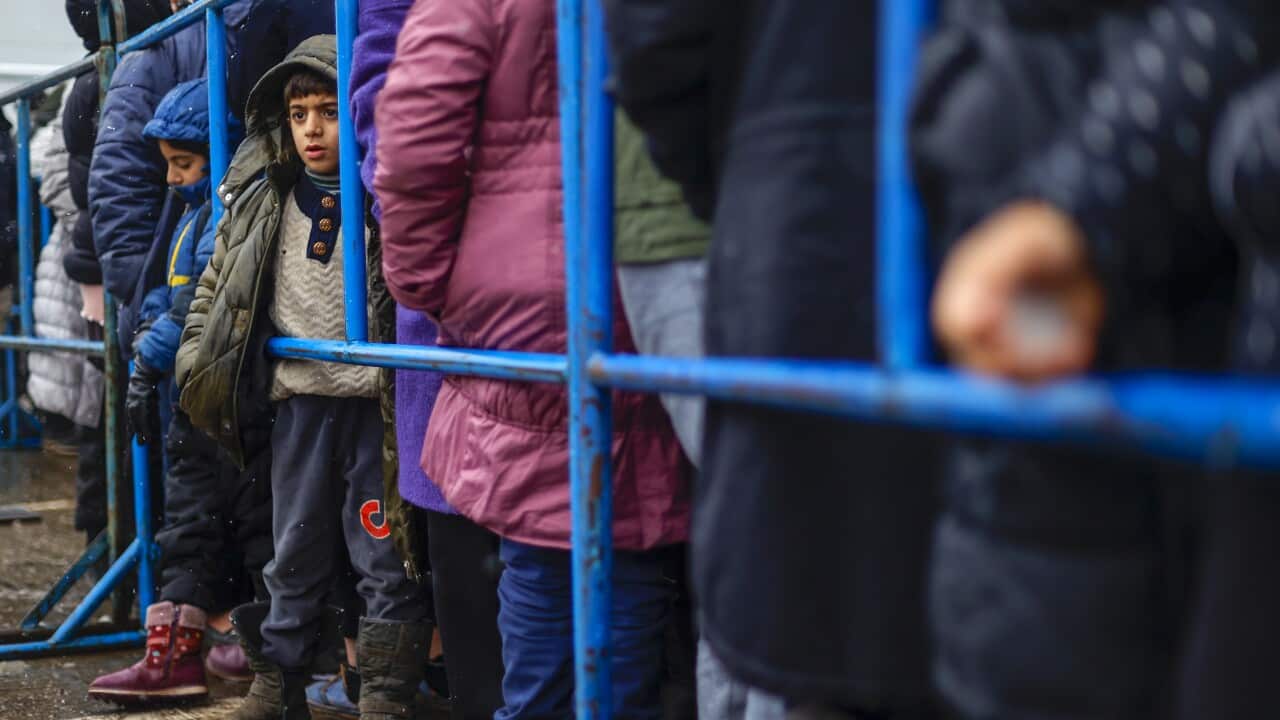 Migrants receive humanitarian aid as they continue to wait at at the Belarusian-Polish border in Grodno, Belarus on 27 November. Source: Getty

Syrian friends Anas Kanaan, 34, and Mouein al-Hadi, 36, were told by people smugglers that they would easily be able to get to Germany from Belarus. They just had to pay 3,000 euros ($4,767) each to an intermediary in Turkey.

But the safe crossings from Belarus to Poland indicated by the smugglers were closed off. Then, after more than a week spent camping in freezing forests on the border, a smuggler led them to a Polish village in broad daylight where they were easily spotted by police, arrested and returned to Belarus.

"It's like our money has just basically evaporated," Mr al-Hadi told Reuters in a field near the Polish town of Orla after again managing to breach the border but now unable to walk because his feet were swollen from the cold.

Advertisement
His childhood mate Mr Kanaan added: "It's all lies. They all lead you to roads where you can die. And at the end they tell you 'we are not responsible for you. Die, whatever'. They just want your money."

Shortly afterwards, the two Syrians - who said they want to request asylum in Poland, not move on westwards to Germany - were picked up once again by the Polish border guard who said they would be taken to a detention centre.

"More people are becoming aware that they've been led into a trap and that what they've been promised is a lie," said Marysia Zlonkiewicz, an activist from Polish charity With Bread and Salt.

The crisis on the Belarusian border, involving thousands of migrants from Syria, Iraq, Afghanistan and elsewhere all hoping to get into the European Union, has dragged on for months.

Poland and the EU accuse President Alexander Lukashenko of encouraging the migrants to travel to Belarus and cross the border illegally as revenge for sanctions imposed on Minsk over human rights abuses. Belarus denies the charge and says the EU is to blame for the humanitarian crisis on the border.

Migrants face a much tougher challenge now to enter the EU.

Under EU pressure, airlines have restricted flights from the Middle East to Belarus, while many travel agencies in the region have stopped selling plane tickets to the ex-Soviet republic.

Poland has deployed over 20,000 border guards, soldiers and police in a sealed-off border zone, while Belarusian authorities have taken many migrants back to Minsk with the apparent aim of letting them return to their home countries.

Poland's Border Guard says illegal border crossing attempts have dropped to around 200 attempts a day from about 500.

Around 314 smugglers have been detained in Poland since August, police data shows. They are from countries including Germany, Sweden, Ukraine and Georgia.

A migrant camp at the Polish-Belarusian border on 18 November, 2021. Source: Picture Alliance

As crossings have become more difficult, the people smugglers have hiked their prices to up to $10,000, migrants told Reuters.

"With every day, things are evolving on the border. Every day, there is a (new) obstacle, there are more guards, more people," Syrian migrant Khaled Zein Al Deen, 45, told Reuters at an open migrant centre in the Polish city of Bialystok.

He and his five relatives lost 18,000 euros ($28,000) to smugglers who promised to take them to a safe apartment, with a car driving ahead of them to make sure there were no police checks. That also proved a lie, and they were caught.

A Polish army spokesperson said the tighter security was making migrants more desperate, with many using force to push through, especially further south, with the help of Belarusians who gave them implements to break down the border fence.
Migrants at the Poland-Belarus border continue to wait under harsh living conditions. Source: Getty

Despite the falling temperatures and increased risks of being caught, the migrants are unlikely to give up trying to get cross, activist Ms Zlonkiewicz told Reuters.

"When it comes to development, education or finding work many of these people have nothing to return to, they have no choice," she said.

"Families went into debt or sold their apartments and homes. There's no going back."