Firefighters have descended on Parliament House to demand more action on climate change and resourcing, saying they're sick of being ignored. 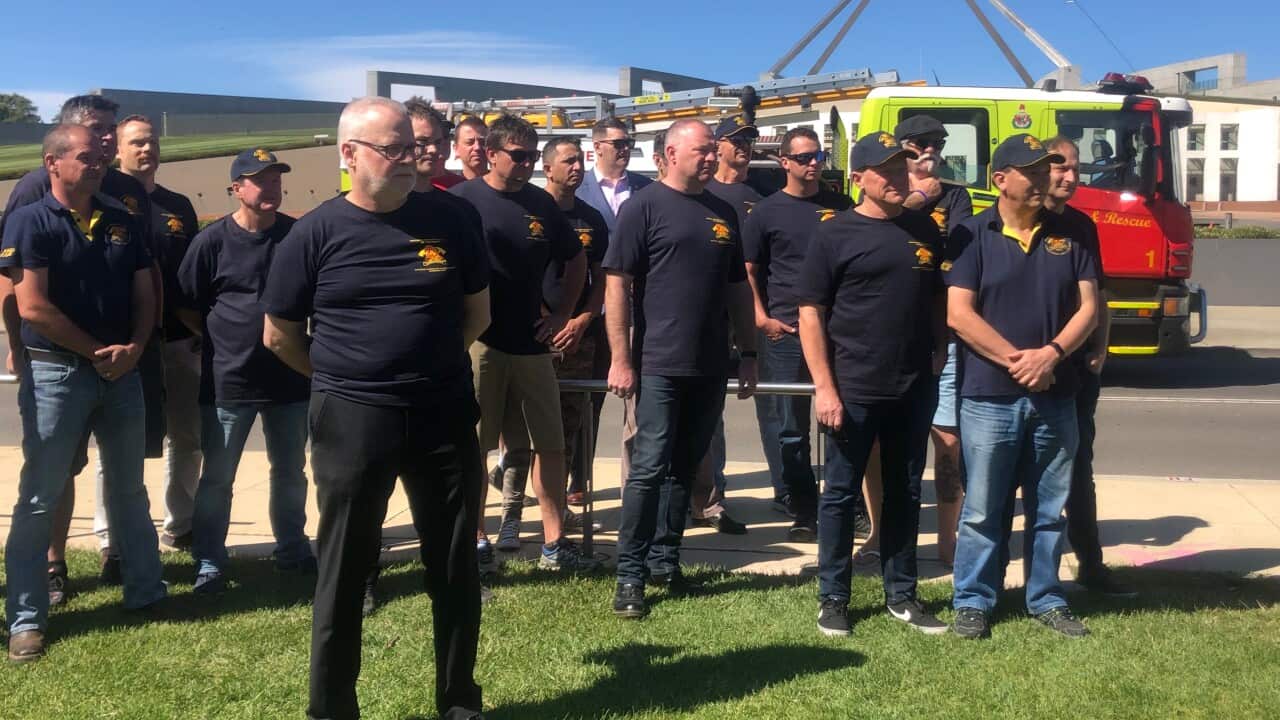 Firefighters during a rally demanding a national approach to Climate Change outside Parliament House in Canberra. Source: SBS

Firefighters are urging Canberra to heed their warnings on climate change and the need for more resourcing - amid unprecedented bushfires ravaging Australia’s east coast.

More than a dozen fireys converged outside Parliament House on Thursday declaring they're sick of their concerns being ignored.

The United Firefighters Union have pleaded for more manpower on the front lines and stronger climate action through the phasing out of fossil fuels.
Mick Tisbury, Commander for Melbourne's Metropolitan Fire Brigade. Source: Supplied

Advertisement
Mick Tisbury, Commander at the Metropolitan Fire Brigade, who has spent 30 years as a firefighter, expressed his deep concern over the severe conditions.

“It’s absolutely demoralising – we are fearful of the fire season we are going to cop – we’ll do the best we can but we can’t perform miracles,” he said.

“People are going to lose their properties – unfortunately, people will probably lose their lives – it won’t be from lack of trying but that’s just the reality.”

His call came as fires continue to burn in NSW, the ACT, Queensland, and Western Australia.

Mr Tisbury said there were no “short term” fixes to the challenges confronting firefighters across the nation.

The firefighters say they are sick of being ignored. Source: AAP

In NSW alone two million hectares of land have been burnt since July in more than 7000 fires, with authorities dubbing it the "most challenging bushfire season ever".

Six people have died while at least 673 homes have been destroyed.

ACT firefighter David Bridgford said the burden of the summer of fires was already starting to take a personal toll.

“It is very evident fighting fires that climate change is real and it’s happening,” he said.

The firefighters are demanding a national approach to allow them to more effectively work seamlessly between state and territory boundaries.

They want greater consistency on the rules around using equipment between states over concerns firefighters travelling interstate face inherent challenges.

Mr Tisbury said firefighters in different states and territories couldn't communicate with each other over the radio or connect hoses to each other's trucks.

“Our firefighters are already exhausted because of what we have been doing in other states,” he said.

The Victorian firefighter said this creates a serious problem as firefighters move around the country to help their under-resourced counterparts interstate.

“We need more resources, we need more funding and we need to stop denying that climate change exists.”

Brisbane-based Tim Limmer is the National Workplace Health and Safety Coordinator for the firefighters union.

He said it was critical fireys were better supported across the nation.

“The detrimental effect of what’s impacting the firefighters and their families – the mental health well being of firefighters – I think is being radically overlooked,” he said.

“I’ve seen fires come into the community further than I’ve ever witnessed … it is just remarkable just how serious it is just this early in the fire season.”

He has explained these warnings were “very well known” to the government including the contribution of climate change to these conditions.

The Federal government has also defended its response to climate change saying it is taking action through meeting its emissions targets.

But Mr Tisbury said this kind of response was needed decades ago and for years their warnings have not been recognised.

The United Firefighters Union is calling for the urgent phasing-out of fossil fuels saying they are driving more dangerous and intense fires.

“We need the Federal government to step up to protection Australian lives from worsening disasters now and into the future,” he said.