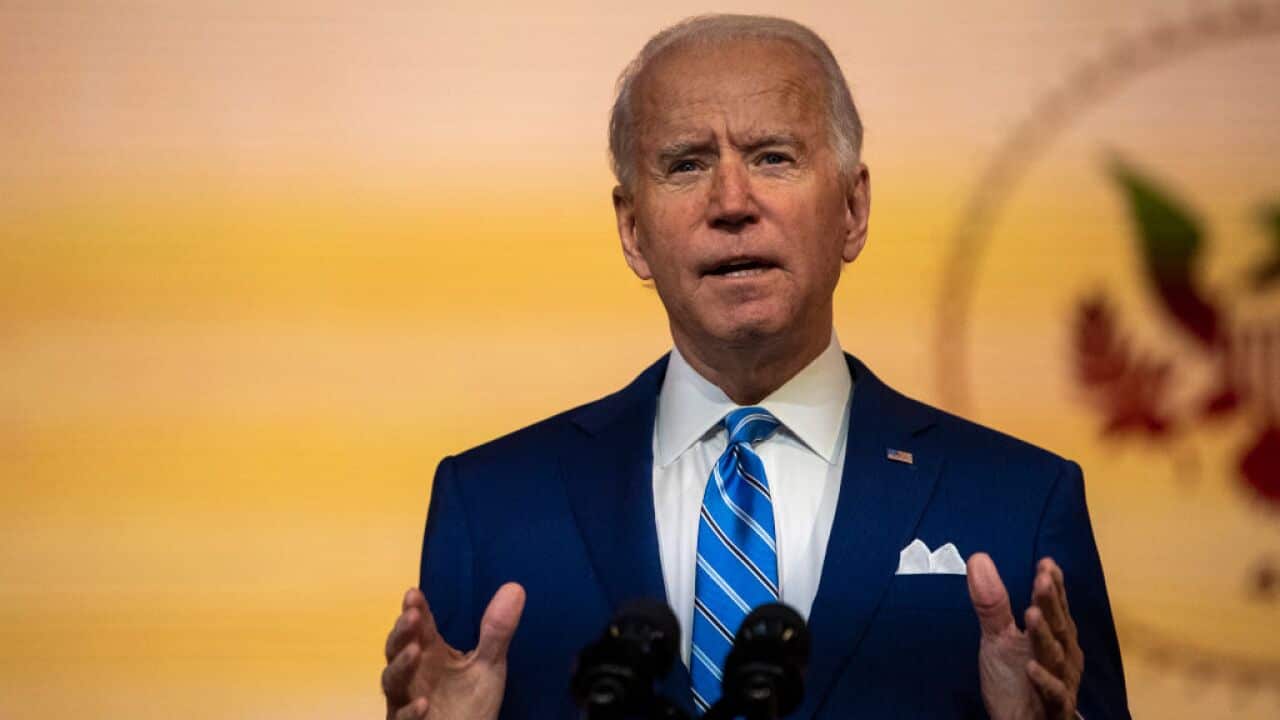 President-elect Joe Biden won Pennsylvania by 80,000 votes and received a much higher proportion of the mail-in votes than Donald Trump. Source: Getty

US President-elect Joe Biden says a "grim" jobs report shows the nation's economic recovery is stalling and warns the "dark winter" ahead will exacerbate the pain unless the Congress passes a coronavirus relief bill immediately.

"The situation requires urgent action," Mr Biden said in a statement on Friday. "Americans need help and they need it now."

A government report earlier in the day showed the labour market slowing in November amid a surge of COVID-19 cases.

More than 213,830 new cases and 2861 deaths were reported on Thursday, according to a Reuters tally of official data.

With US COVID-19 hospitalisations also at record levels, several experts project the death toll will soon surpass 3000 per day.

Mr Biden, the Democratic former vice president, offered support for an emerging bipartisan package of around $A1.2 trillion that has drawn tentative support from members of both parties in Congress.

But he said the bill would be "just the start" and vowed to press for additional relief once he takes office in January.

The president-elect has focused heavily on the pandemic and economy during the transition, after a campaign in which he made President Donald Trump's mishandling of the coronavirus a central theme.

He is expected to name Jeff Zients, a co-chair of his transition and a former Obama administration economic aide, as his coronavirus "czar" to co-ordinate the government's pandemic response.

Mr Zients would also oversee an ambitious vaccine distribution effort, according to a person familiar with the matter.

Meanwhile, Vice President Mike Pence was visiting Georgia on Friday, where he was receiving a briefing on the pandemic at the Atlanta headquarters of the Centers for Disease Control and Prevention.

Mr Pence will then attend a rally with Republican US senators David Perdue and Kelly Loeffler, who face January runoff elections that will determine control of the Senate.

Mr Trump, a Republican who has still refused to concede to Mr Biden, is scheduled to headline a rally with Perdue and Loeffler on Saturday.

Mr Biden has also promised a new national strategy that will impose mask mandates where he will have authority, such as federal buildings and for interstate travel, once he takes over for departing Mr Trump on 20 January.

Beyond the mandate,
he urged people to voluntarily wear masks
, seeking to counter lax public discipline to date and Trump's own timid endorsement of mask-wearing.

"And I think we'll see a significant reduction if we incur that - if that occurs, with vaccinations and masking, to drive down the numbers considerably."

Two promising vaccines could soon receive emergency use authorisation from the US Food and Drug Administration, and some 20 million Americans could be vaccinated this year, FDA Commissioner Stephen Hahn said on Friday.

As soon as the FDA approves a vaccine, "I will be first in line and I will encourage my family to take this vaccine", Mr Hahn said.

Mr Biden said he would be happy to get vaccinated publicly, as former presidents Bill Clinton, George W Bush and Barack Obama have pledged, in order to boost public confidence and persuade vaccine sceptics.

READ MORE
Former US presidents Obama, Bush and Clinton will take a coronavirus vaccine on camera to prove it's safe

Other public figures have followed, including best-selling novelist Stephen King.

"As a kid of five or six, I lined up with other little people to get the Polio Vaccine. As a man of 73, I'll line up for the COVID-19 Vaccine as soon as I'm told it's time," Mr King said on Twitter.

The US government's first shipment of millions of coronavirus vaccine doses is expected to be shared by states and federal agencies, including the Department of Defense.

But it will fall far short of protecting high priority groups such as healthcare workers, a Reuters analysis has found.

Anthony Fauci, a member of the White House coronavirus task force, said on Friday he expected to see another surge in infections two or three weeks after the 26 November Thanksgiving holiday.

"We really have to intensify our public health measures," he said.


Mr Fauci also said he has accepted Mr Biden's offer to be his chief medical adviser, as well as keep his current position.

US cases since the start of the pandemic surpassed 14 million on Thursday and more than 100,000 people were hospitalised.

California Governor Gavin Newsom said he would impose strict new stay-at-home orders to be triggered on a region-by-region basis when less than 15 per cent of intensive care unit capacity is available.