The Coalition has criticised Labor for waiting until Thursday to release its policy costings, while the government has failed to provide a representative for NITV's The Point election special. Here are the key points from day 37 of the campaign. 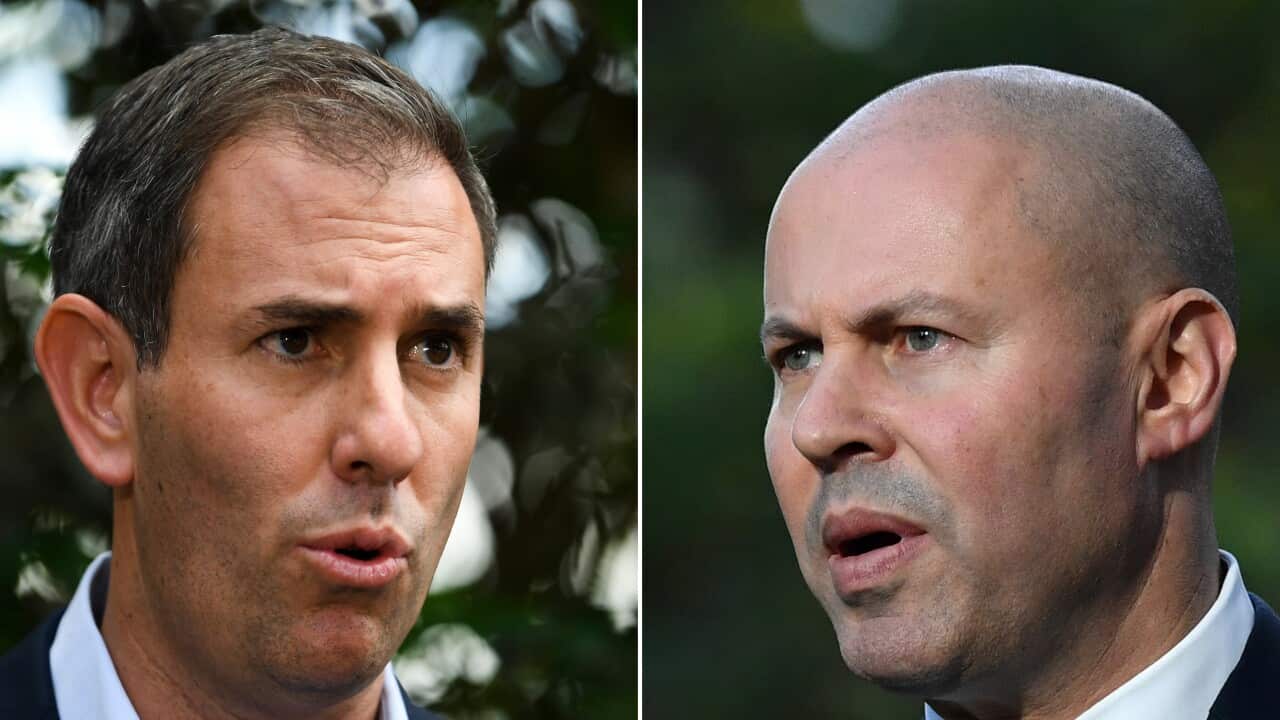 Opposition Treasury spokesperson Jim Chalmers has hit back at the Coalition, defending Labor's decision to release its policy costings on Thursday.

The Coalition's costings — released on Tuesday — show an improvement to the federal budget bottom line of about $1 billion over four years compared to the March budget.

That will be achieved by lifting the efficiency dividend applied to government departments and agencies by 0.5 percentage points to two per cent.
Advertisement
READ MORE
Climate change is an issue for many voters. Here's how the Coalition and Labor compare
Finance Minister Simon Birmingham promised essential services will not be cut to make the savings.

How the annual reduction in costs is applied would be left to bureaucrats.

"The opportunities for departments ... exist in relation to management of their accommodation, technology, consultancies and contractors, their staffing arrangements," Senator Birmingham told reporters in Melbourne on Tuesday morning.

"These in no way impact the delivery of services and support to Australians. Essential services remain guaranteed under the Coalition."
Senator Birmingham and Treasurer Josh Frydenberg criticised Labor's policies and costings, saying they "lacked transparency".

"Ask yourself the single question - and hopefully 26 million are asking the simple question: 'why has Labor not put forward these policies for costings? Why?' There's no reason other than they do not want to be subject to scrutiny," Mr Frydenberg told reporters in Melbourne.

"And we have detailed where all these spending pressures are with respect to Labor's commitments. And we also know from recent experience what Labor will do to fund these increased commitments. They will put in place higher taxes."
READ MORE
'People living in cars': Rising inflation is devastating for low-income earners, community groups say
"So we have been both accountable and responsible in putting our policies forward for costing. And today, we are reconciling our spending commitments with the efficiency dividend which will more than offset those spending commitments and again improve our budget bottom line.

"You have not seen the same responsible approach from the Labor party."

Speaking to the media after the Coalition's policy costing announcement, Mr Chalmers defended Labor's decision to wait until Thursday.

"You can't take this government seriously on the economy or the budget given their record. This Morrison government has become a laughing stock on the budget and the economy given the failures over almost a decade in office now," he told reporters.

"Now, what we see in the budget and what we see in the government's costings today is a budget which is absolutely heaving with rorts and waste and $1 trillion in Liberal debt. Now, Josh Frydenberg and Scott Morrison, they want to bang on about Labor's costings as a desperate attempt to distract from their own failures on the economy and on the budget.
"We will release our costings on Thursday consistent with the practice established by the Coalition. The Coalition released their costings the Thursday of the final week of the last election, and the last two times that they were in Opposition. We will release our costings in the usual time, in the usual way, consistent with the practice which has been established by the Coalition.

"So all of this bleating and banging on about Labor's costings can only be seen as a desperate distraction from the government's own substantial economic and budget failures."

Opposition leader Anthony Albanese has remained tight-lipped on whether Labor's costings would be higher or lower than the Coalition's.

"This government made $70 billion of announcements with no offsets. Not a dollar of offsets between December's MYEFO [Mid-Year Economic and Fiscal Outlook] and the March budget that they brought forward," he told reporters in Perth.
READ MORE
What politicians can and can't do with their political ads
"In terms of what this government has done is $70 billion, they have added. They will leave a legacy of $1 trillion of debt. Now, what we have done during this campaign is be responsible.

"We've been fiscally responsible in all of the statements that we've made, including today's announcements.

"We said what dollars would go, and we have done that throughout this campaign. We have a couple more announcements to go. We have until Saturday. But we will be releasing our costings announcement on Thursday."

The episode will cover issues impacting First Nations communities and as no representatives attended, the Coalition will be represented by an empty chair.

Ms Burney called the situation "pathetic".
"I think it’s absolutely pathetic that the Coalition didn’t see this as important enough to actually get someone to participate in the debate," she said.

"I would be insulted if I was SBS about the Coalition not providing a person for the Q&A today."

"It is disappointing. I think we need to show accountability and transparency to our people, and given we have a minister for Indigenous Australians, it’s a bit disappointing he couldn’t make it," she said.
On the campaign trail in the vast Northern Territory seat of Lingiari — which has the highest percentage of Indigenous voters in the country — SBS political correspondent Shuba Krishnan asked Prime Minister Scott Morrison why no-one from the Coalition was made available to appear on NITV.

"We are investing $30 million in supporting connectivity, particularly for Indigenous communities right across the country," Mr Morrison said

"That’s how you close the gap, the connectivity for Indigenous Australians."

When asked directly whether somebody from the party would appear on the program, he did not respond.

The special episode will air Tuesday night on NITV at 7.30pm.

During his press conference in Darwin on Tuesday morning, the prime minister dismissed suggestions a federal integrity commission would operate with the same open justice process as courts.

Mr Morrison opposes the way the NSW Independent Commission Against Corruption operates, previously labelling it a "kangaroo court" that could do irreparable damage to an innocent person's reputation.
READ MORE
Scott Morrison 'stands by' comments calling NSW anti-corruption watchdog a 'kangaroo court'
He doubled down on his criticisms when pushed on whether open justice was a key pillar for a federal anti-corruption commission.

"Where matters were to proceed under our model that involved criminal behaviour, they would go to court and that's where that process would be followed," he said.

"That's how we've designed it. That's consistent with how the justice system works."

NSW established its Independent Commission Against Corruption (ICAC) in 1988, and there have long been calls for its model to be adopted at the federal level, despite the prime minister's objections.
READ MORE
'Deeply offensive': Commissioner savages Scott Morrison’s criticism of NSW anti-corruption watchdog
Earlier this month, NSW Independent Commission Against Corruption commissioner Stephen Rushton told a parliamentary review that references to the ICAC as a "kangaroo court" were misleading and untrue.

People who made those comments were "buffoons", he told the parliamentary review.

Labor has announced a $1.5 billion medical manufacturing fund if it wins the election.

It says the plan will help to shore up medical supply chains including vaccines and will form part of a $15 billion national reconstruction fund.

Anthony Albanese made the case for revitalising industry and manufacturing capabilities across a range of sectors.
"Australians should be able to access medicines, vaccines and medical supplies when we need them," he said.

"We cannot afford our health and wellbeing to be hostage to global supply chains. But more than that, we have medical innovation and world-class science happening right here."

Australia-China relations will be challenging for Labor or Coalition, former foreign ministers say

Australia's relationship with China will be a challenge for whichever party wins the election on Saturday, two former foreign ministers have told oil and gas leaders.

"It's going to be a challenge for whomever forms government," former foreign minister and deputy leader of the Liberal Party Julie Bishop said on Tuesday, just days out from polling day.

China's trade bans have hit key agricultural and resources exports and Australia would face further challenges if China and Russia split off from the West into a future financial, technology and trading bloc.
READ MORE
‘Pay more attention’: Taiwan’s foreign minister warns Australia of China’s rise in the Pacific
Labor's Stephen Smith, also a former foreign minister, spoke alongside Ms Bishop on an election panel at an oil and gas industry conference. He said he cannot see the relationship changing until China changes.

"There can be a more nuanced approach in terms of how Australia conducts itself," he told the Australian Petroleum Production and Exploration Association event.

"We don't need to be engaging in megaphone diplomacy on a daily basis."

Ms Bishop said Solomon Islands and its new security pact with China represents a broader power competition in the region, where China sees itself as equal to the United States.