A Saudi-led coalition has directed an air raid in a deadly attack on a prison in northern Yemen, claiming the lives of at least 70 people with many others missing. 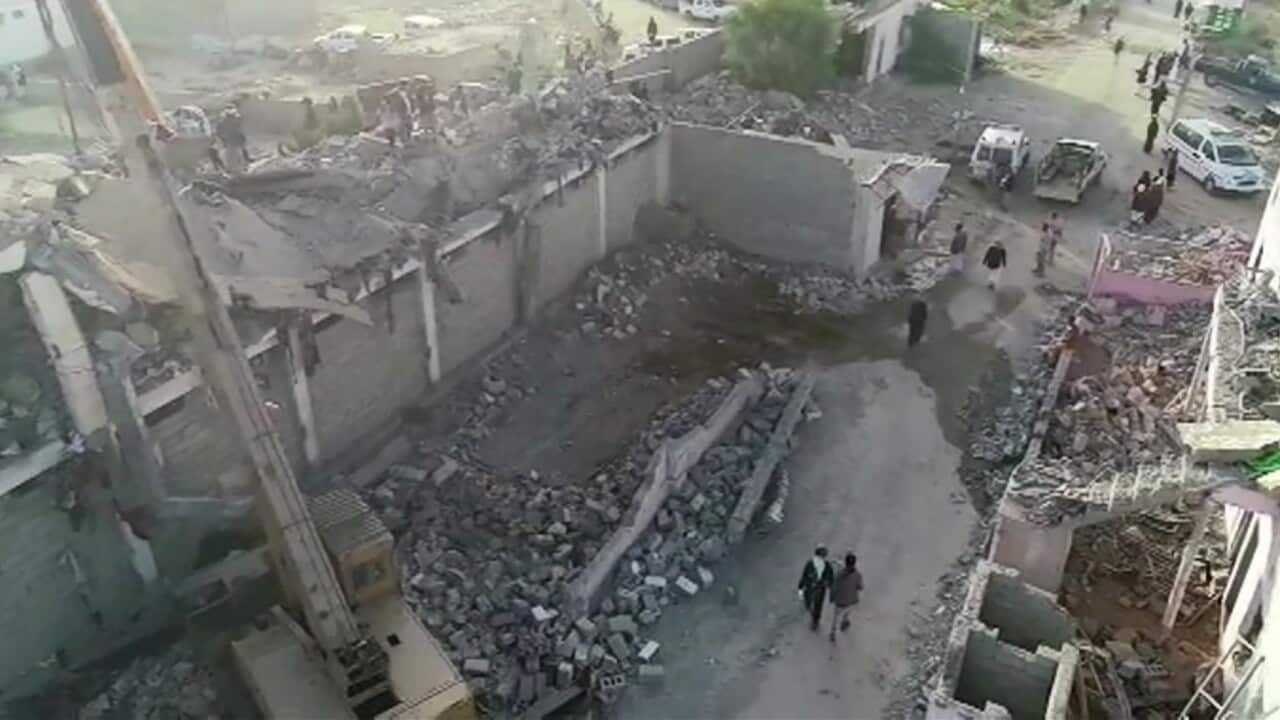 Rescuers working at the site of damaged prison after an alleged Saudi-led airstrike in Saada, Yemen. Source: SBS

At least 70 people have been killed in an air strike on a prison in northern Yemen as the long-running conflict with Saudi Arabia suffered a dramatic escalation on Friday that drew condemnation from UN chief Antonio Guterres.

The Huthi rebels released gruesome video footage showing bodies in the rubble and mangled corpses from the attack, which levelled buildings at the prison in their northern heartland of Saada.

Further south in the port city of Hodeida, at least three children died when air strikes by the Saudi-led coalition hit a telecommunications facility as they played nearby, Save the Children said. Yemen also suffered a country-wide internet blackout.

"The children were reportedly playing on a nearby football field when missiles struck," Save the Children said.

Eight aid agencies operating in Yemen said in a joint statement they were "horrified by the news that more than 70 people, including migrants, women and children, have been killed... in a blatant disregard for civilian lives".

They said the prison in Saada was used as a holding centre for migrants, who made up many of the casualties.

But the United Arab Emirates (UAE) insisted that it and other coalition members remained committed to "proportionate" responses to Huthi attacks.

"The coalition undertakes to abide by international law and proportionate response in all its military operations," UAE ambassador to the United Nations Lana Nusseibeh said.

The strikes came after the Huthis took the seven-year war into a new phase by claiming a drone and missile attack on Abu Dhabi that killed three people on Monday.

They came as the UN Security Council met to discuss that attack at the UAE's request.

The council unanimously condemned the "heinous terrorist attacks" by the Yemeni rebels, but in a statement before the meeting the council's Norwegian presidency also strongly condemned the latest violence.

"It's not acceptable," Norwegian ambassador Mona Juul said of the strikes, calling for "de-escalation and restraint".

In a later statement, the UN said Mr Guterres "reminds all parties that attacks directed against civilians and civilian infrastructure are prohibited by international humanitarian law."

Aid workers said hospitals in Saada were overwhelmed after the prison attack, with one receiving 70 dead and 138 wounded, according to Doctors Without Borders.

Two other hospitals have received "many wounded" and as night fell, the rubble was still being searched, the aid agency said.

Ahmed Mahat, Doctors Without Borders' head of mission in Yemen, said: "There are many bodies still at the scene of the air strike, many missing people."

"It is impossible to know how many people have been killed. It seems to have been a horrific act of violence."

The coalition claimed the attack in Hodeida, a lifeline port for the shattered country, but did not say it had carried out any strikes on Saada.

Saudi Arabia's state news agency said the coalition carried out "precision air strikes ... to destroy the capabilities of the Huthi militia in Hodeida".

It said Saudi air defences destroyed a missile fired from Saada on Friday towards Khamis Mushait, site of a major Saudi air base.

The outage in Hodeida and Sanaa have been confirmed. Save the Children said it would hamper its operating capacity.

Yemen's civil war began in 2014 when the Huthis descended from their base in Saada to overrun the capital Sanaa, prompting Saudi-led forces to intervene to prop up the government the following year.

Tensions have soared in recent weeks after the UAE-backed Giants Brigade drove the rebels out of Shabwa province, undermining their months-long campaign to take the key city of Marib further north.

On 3 January, the Huthis hijacked a United Arab Emirates-flagged ship in the Red Sea, prompting a warning from the coalition that it would target rebel-held ports.

And on Monday, they claimed a long-range attack that struck oil facilities and the airport in the UAE capital Abu Dhabi, killing two Indians and a Pakistani, and wounding six other people.

The attack - the first deadly assault acknowledged by the UAE inside its borders and claimed by the Huthis - opened up a new front in Yemen's war and sent regional tensions soaring.

In retaliation, the coalition carried out air strikes against rebel-held Sanaa that killed 14 people.

Yemen's civil war has been a catastrophe for millions of its citizens who have fled their homes, with many close to famine in what the UN calls the world's worst humanitarian crisis.

The UN has estimated the war killed 377,000 people by the end of 2021, both directly and indirectly through hunger and disease.