Schools and parks in South Australia will be closed on Wednesday as the state prepares for catastrophic fire danger conditions, while NSW firefighters get a brief reprieve. 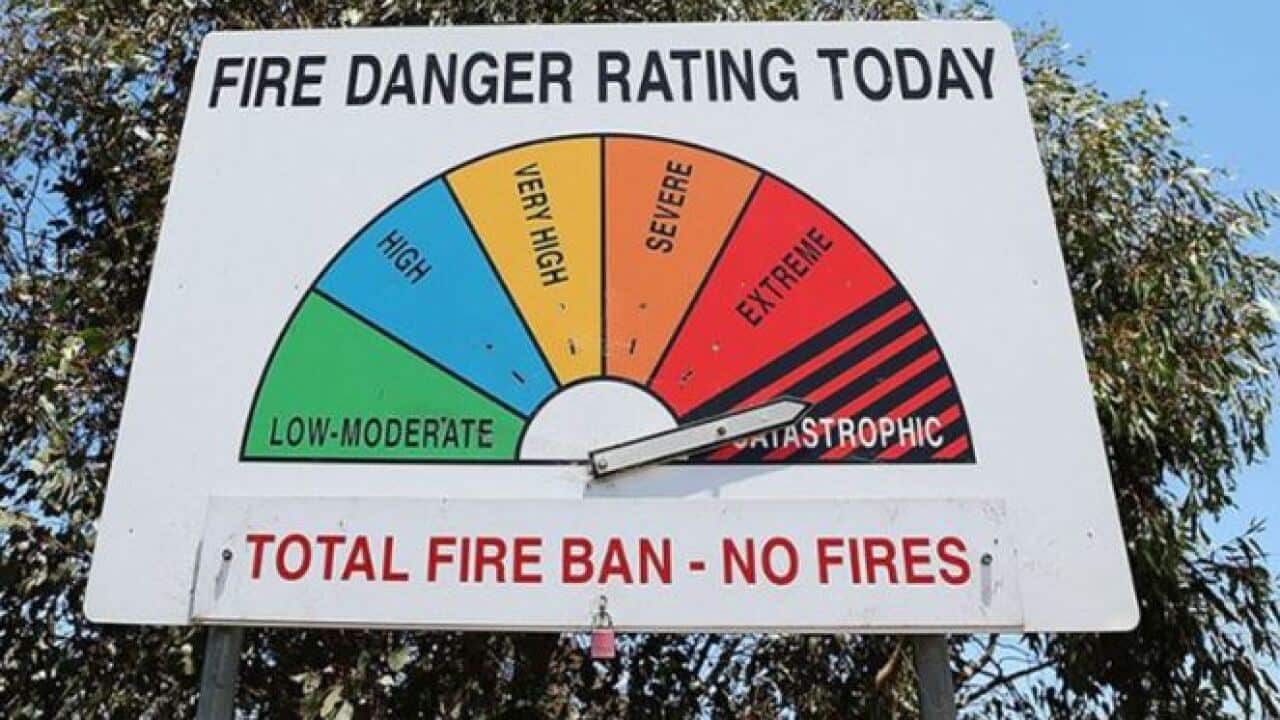 A total fire ban is in place in South Australia. Source: CFA

More than 100 schools will be closed in South Australia on Wednesday, as much of the state braces for catastrophic fire danger conditions.

The Bureau of Meteorology has forecast a maximum 42C for Adelaide, while the mercury is expected to reach 45C at Murray Bridge, 44C at Renmark, Port Augusta, Port Lincoln and Whyalla, and 43C at Port Pirie.

The hot temperatures will be accompanied by strong winds and possible dust haze.

Advertisement
Seven districts have been catastrophic fire danger zones - including the Mount Lofty Ranges and Mid North near Adelaide - while two were rated "extreme" and six "severe".

"We don't take seven catastrophic fire danger warnings lightly - that is as bad as it gets," he said.

"That means when a fire starts it's not possible for us to control it, so it places the community at great risk."

The CFS has 11 fixed wing aircraft available for firefighting, including one from New South Wales, but windy conditions may prevent them from flying.

More than 100 schools in areas of catastrophic fire danger will remain closed, as well as affected national parks and reserves.

The Bureau of Meteorology said several November heat records could fall, including Adelaide's hottest November day of 42.7C set in 1962.

A total fire ban will be in place across the state.

As the temperatures heat up in South Australia, NSW firefighters are set for a brief reprieve from difficult bushfire conditions.

Two fires at "emergency" warning level on Tuesday have since been downgraded to "advice" level - a persistent 146,000-hectare blaze at Gospers Mountain in the Hawkesbury region, and a fire at Myall Creek, on the Northern Tablelands.

At 7:30am on Tuesday more than 50 fires were burning around the state, with 22 uncontained.

Mr Fitzsimmons said that tough fire conditions in NSW would return on Thursday, with a weather system coming in from South Australia bringing hot easterly winds.

Unlike recent conditions, that would endanger much of southern NSW.

"This time, the indications are (it will be) the southern half of NSW with some of the more widespread, worst conditions. We've got a long way to go yet."

The Bureau of Meteorology, meanwhile, says the smoke haze that blanketed Sydney on Tuesday is expected to continue into Wednesday.

"We really aren't going to be out of the woods for the coming days with that air quality issue from smoke over the eastern part of the state," the bureau's NSW regional manager Ann Farrell told reporters on Tuesday.

Tasmanians are being told to prepare for the most dangerous fire conditions so far this bushfire season, with high temperatures and strong winds to hit the state.

The fire danger rating in the south and southeast will reach severe levels on Thursday, the Tasmania Fire Service has warned.

Temperatures are forecast to peak in the mid-30s across the island, with Hobart expected to reach 30C.

"These are the most dangerous fire weather conditions forecast so far this bushfire season and any fires that start will be difficult to control," Deputy Chief Officer Bruce Byatt said on Wednesday.

A 24-hour total fire ban has been declared for the north and south from 2am on Thursday, with landowners told to put out any fires before then.

Dry winds of 60-70km/h are forecast, but relief from the hot weather is expected on Thursday afternoon when a cold front crosses the state.

Bushfires in October threatened shacks in the Central Highlands and authorities are bracing for a tough summer season.

"The long-range forecasts are telling us that this fire season is notionally worse than what we experienced last year for that north and east-coast area," Mr Byatt said.

"Certainly the fires that have occurred in New South Wales and Queensland are a reminder to us about people having their fire plans in place."