There had been huge public backlash to news that Djokovic received a vaccination exemption allowing him to play in the Australian Open. 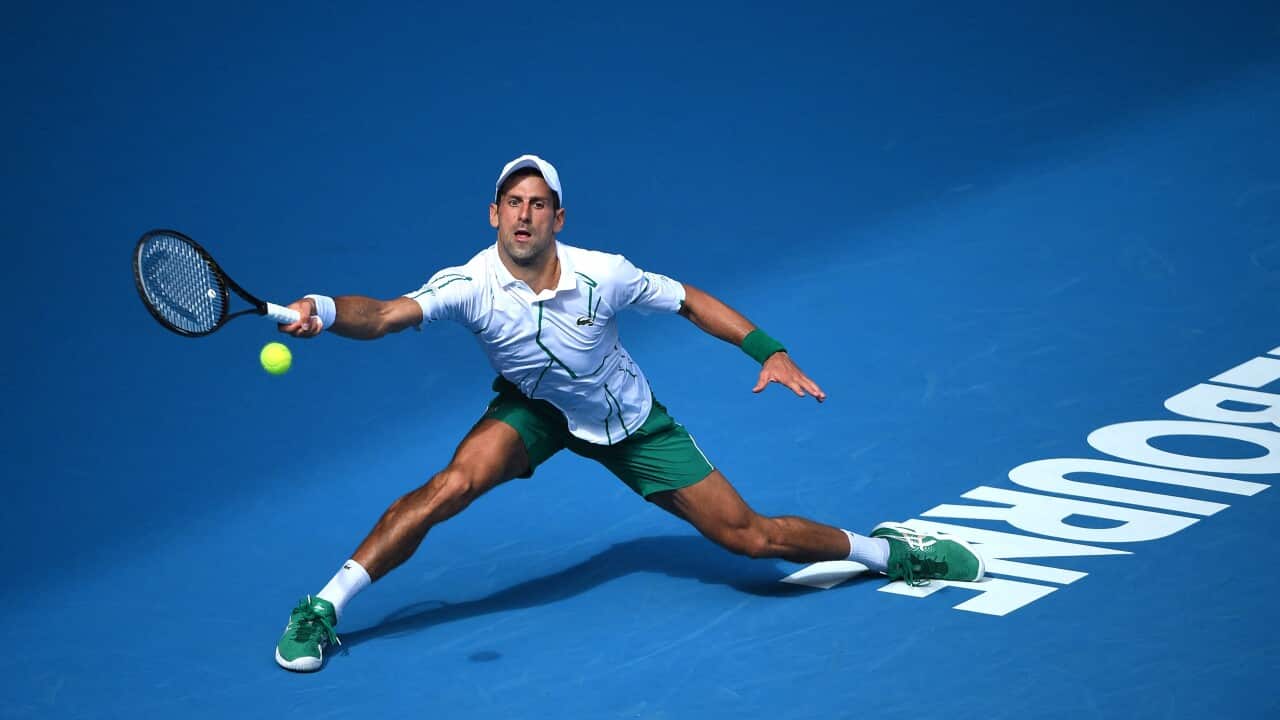 The world number one, whose vaccination status is unknown, spent the night at Melbourne airport. Source: ABACA

Men's tennis world number one Novak Djokovic will remain in limbo over the weekend after an appeal against the cancellation of his visa was adjourned.

The nine-time Australian Open champion arrived in Melbourne on Wednesday night only to be sensationally stopped at the airport.

His legal team have applied for a judicial review of the decision, and want to prevent the Serbian from being deported in the meantime.

Advertisement
Federal Circuit Court Judge Anthony Kelly on Thursday evening said there was a delay in receiving the application for a review of the visa decisions and the temporary ban on Djokovic's deportation.

As such, Home Affairs Minister Karen Andrews' lawyer agreed the tennis star should not be deported until Monday at least, when his case is due back before the court, unless he decides to leave of his own accord.

Djokovic's barrister Nick Wood argued the government should be barred from deporting the 20-time grand slam champion until his visa matter is decided in full.

However, the judge shot that suggestion down, saying the tennis star could in theory launch "a cascading series of appeals" to delay his deportation.

The lawyers for both parties and the judge will work to determine a timeframe for an interim ban on his deportation in chambers, while the court is out of session.

The case was adjourned until 10am on Monday, when the court is due to hear the challenge to the decision to cancel Djovokic's visa.

Thursday's events came after a
huge public backlash
to the announcement by Djokovic that he'd received a vaccination exemption allowing him to play in the 2022 Australian Open.

The 34-year-old claimed he had an exemption against vaccination allowing him to enter Australia, but it appears it was only granted for the tournament and not for entry into the country.

Prime Minister Scott Morrison said on Wednesday, the Serbian star would have to satisfy the federal government, which has responsibility for international visas and was not part of that exemption process.

On Thursday morning, the Australian Border Force confirmed Djokovic "failed to provide appropriate evidence to meet the entry requirements to Australia" and his visa had been cancelled.

"Non-citizens who do not hold a valid visa on entry or who have had their visa cancelled will be detained and removed from Australia," the ABF said in a statement.

Since 15 December, fully vaccinated eligible visa holders can arrive in Australia without needing to apply for a travel exemption and can travel to eligible states and territories without having to quarantine.

It's not known if Djokovic, who has previously spoken out against vaccines, has received a COVID-19 jab.

But if a person is not vaccinated, they must provide proof they cannot be for medical reasons or be turned away.

"Rules are rules and there are no special cases," Mr Morrison told reporters on Thursday.

“If you are not double vaccinated and not an Australian resident or citizen, you cannot come - and many countries have those rules around the world.

“It is on [the traveller] to have the proof to show why they would not have to be vaccinated. [Djokovic] was unable to furnish that proof to Border Force officers at the airport last night and they are the rules.”

Djokovic was taken on Thursday to the Park Hotel in Carlton, a place of immigration detention housing dozens of asylum seekers. A fire has broken out there in recent weeks and detainees
have reported being given meals with maggots and mould to eat
.

Shortly before it was confirmed his visa was cancelled, Djokovic's father Srdjan told the Serbian B92 internet portal: "Novak is currently in a room which no one can enter. In front of the room are two policemen."

Serbian President Aleksandar Vucic had released a statement saying he had offered support to the tennis champ.

"I told our Novak that the whole of Serbia is with him and that our bodies are doing everything to see that the harassment of the world's best tennis player is brought to an end immediately," he said.

Mr Morrison said he was “aware of representations” made by the Serbian embassy in Canberra regarding the case, but rejected suggestions its handling of the matter had damaged Australia's reputation internationally.

“Serbia has been a good friend of Australia and provided very strong support, particularly on security issues globally, and we greatly appreciate that,” he said.

“This is a very specific case that deals with one individual and Australia's sovereign border laws and their fair application.”

Separately, Rafael Nadal said Djokovic was "free to take his own position, but then there are consequences".

Speaking after a match in the Melbourne Summer Set - a warm-up tournament for the grand slam - he said: "In some way, I feel sorry for him but he knew the conditions months ago.

"Of course what's happening is not good for Novak, in my opinion. [But] if you are vaccinated, you can play in the Australian Open.