As the flames licked at her home and thick plumes of black smoke blocked her path to safety, Catherine Hubbard made her eldest son a promise. 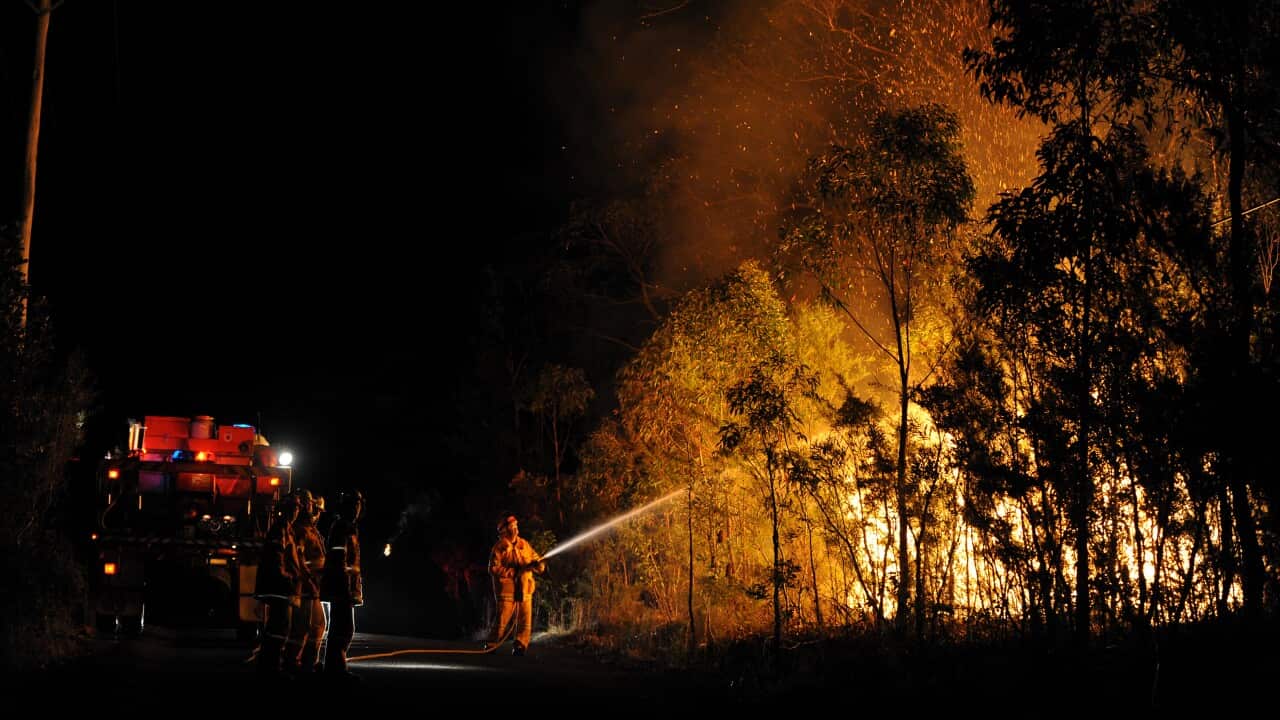 "He was telling me to get out, crying," she recalled on Friday.

The mum-of-five made a terrifying escape from the bushfire that ripped through the lower Blue Mountains on Thursday, destroying scores of homes around Springwood, Yellow Rock and Winmalee.

Advertisement
She returned on Friday, embracing her daughter Amy as the pair took in the rubble and ashes that had been their home.

"It was just completely gutted, to the ground," she told AAP.

"There was nothing left except a baby cup my daughter had when she was little."

The family is now homeless and their belongings were uninsured, but Ms Hubbard said the fact she survived at all was a "miracle".

She'd been napping when disaster struck - woken by a phone call from a worried colleague, wanting to know if she was near the fires.

"But when I went out and checked outside my veranda there was a tree alight and fire all around the backyard."

She threw the pets in the car but was blocked by "a wall of smoke".

Frantic, she approached strangers on the street and asked if she could seek shelter in their home.

"The sun was totally blocked out and houses were burning down to the ground all around us," she said.

Without running water, the neighbours used buckets and wet towels - "whatever we could get our hands on" - to douse embers, knowing the house was their only refuge.

Then came a change in the wind.

This time, the sudden shift that so often turns deadly in bushfires cleared a path through the smoke instead.
"It was a miracle, actually," Ms Hubbard said.

She plans to take her youngest kids back to the shell of their old house on Saturday, "to give them closure".

Then the rebuilding begins.

"This will be a fresh start for us," Ms Hubbard said.

RFS confirms that an initial assessment of properties in Springwood and Winmalee has been carried out. So far, 81 properties destroyed and 37 damaged.

Centrelink is offering support for people whose homes have been lost. To contact Centerlink, phone 180 2266.

"This is a fire emergency that could go on for some time."

An Emergency Warning is in place for the area around Chapman Parade at Springwood due to fire activity.

Camden Valley Way: Fire has been downgraded to Watch & Act

2.54pm RFS posts alert that crews are on the scene at a fire on camden Valley Way.

"Property directly threatened. Residents in the area should shelter in place."

An Emergency Warning is in place for the Ruttleys Road Fire. There is a threat to properties in the area around Chain Valley Road. For more visit the
RFS website
.

Commissioner Fitzsimmons described the conditions as “still a very hostile” and said 86,000 hectares of countryside was being burnt, including seven major fires covering 50,000 hectares.

An Emergency Warning is in place for the area around Chapman Parade at Springwood due to fire activity. For more visit the
RFS website
.

1.16pm Professor Ross Bradstock says the fires in the Blue Mountains are the worst since 1968.
“On average there has been one destructive fire a decade in the Blue Mountains, but these appear to be the most destructive fires since 1968, when over 100 houses were also lost in the same area," says Professor Bradstock, Director of the Centre for Environmental Risk Management of Bushfires.

"We are in a very dry situation in the greater Sydney region and when these landscapes dry severely, many of the natural barriers to fire are removed. In these sorts of dry conditions fires can burn for weeks until there is a significant change in the weather.”

The RFS has reissued an emergency warning for a fire burning in  the Wyong area on the NSW central coast and urging residents to take shelter.
Detailed information here.

An emergency warning is also in place in Springwood in the Blue Mountains.
Full information on the warning here.

"I've been advised ... that it's been confirmed that four houses in the heritage village of Catherine Hill Bay have been lost," she told ABC radio.

"The historic jetty is currently on fire."

She described "flames, a huge amount of smoke and lots of risk".

Linksview Road, Springwood: UPDATE Students will now be remaining at Springwood High School and are not relocating.
#NSWRFS
#nswfires

12.58pm The NSW Wildlife Information Rescue and Education Service Inc
releases a factsheet
on how wildlife should be cared for during a bushfire.

12.40pm Prime Minister Tony Abbott says the thoughts and prayers of every Australian are with the people who are suffering and affected by the bushfires in New South Wales.

12.37pm NSW Premier Barry O'Farrell has taken this image of the bushfire damage seen from the skies.

12.28pm As firefighters continue to battle fires across NSW, some residents in the Blue Mountains and on the Central Coast have told their stories of survival.
Read the accounts here.

“My husband came up and said to me ‘Look, we’ve had all our windows blow up. The house is on fire. We’re not going to save it'."

12.21pm A bushfire flares up in Springwood's Chapman Parade.

EMERGENCY WARNING: Fire has flared up at Chapman Parade at Springwood. Emergency phone warning is being sent to people in the area
#nswfire

12.00pm Strike teams are assembling in Springwood in the Blue Mountains.

11.40am SBS World News Australia reporter, Nikki Canning is a resident of Springwood and is preparing as the fires creep closer to her house. She spoke with Naomi Selvaratnam.
Hear the full interview
below:

11.28am The view from the skies of the bushfires in the state's south.

11.27am Low-income earners seeking disaster relief grants have been advised to call number below.

11.14am: Evacuation centres are currently open in Springwood, Lithgow, Raymond Terrace, Swansea and Doyalson. Some others have closed, but this information is subject to change. Please click the link below to view full details.

11.03am: RFS Commissioner Shane Fitzsimmons says he hopes a warmer change won't be as severe as the conditions yesterday.

"Come Sunday and Monday, we can expect to see a return to warmer, drier conditions and a wind pattern dominating out of the north-west, albeit at this stage it's not expected to be quite as strong and as gusty as we saw yesterday."

10.53am: The Ruttleys Road fire near Wyong continues to burn out of control, the NSW Rural Fire Service
has advised
. More than 1500 hectares of scrub and bushland have been burnt so far.

10.31am Eighty national parks have been closed due to the bushfires.

The
@OEHmedia
has updated its list of national park closures. 8 parks affected by fire; 80 parks with closed areas.
https://t.co/Hj0Mlm5jNs

10.20am
In a statement
, NSW Police say a report is being prepared for the Coroner to officially determine how the63-year-old man died while defending his home against a fire in the state's north.

10.16am Sydney Area Health says two people are being treated at Concord Hospital with bushfire-related injuries.

9.49am NSW Premier O'Farrell confirms a 63-year-old man has died defending his home against a fire in Lake Munmorah in the state's north.

9.46am Authorities say they're preparing for the worst.

"We cannot rule out the very real prospect that some people may not have got out," RFS Commissioner Shane Fitzsimmons says.

9.39am NSW Premier Barry O'Farrell has just received the latest briefing from the NSW RFS HQ.


9.26am Authorities are recommending people use the 'Fires Near Me' app to keep updated with bushfire warnings.

Download
@NSWRFS
mobile app 'Fires Near Me' for a list of fires & fire info. They also have a mobile site:
http://t.co/x4rP7C5s4m
#nswfires

9.23am Greens MP Adam Bandt has defended suggesting the coalition government's climate change strategy could lead to more devastating bushfires like those raging across NSW.

"Why Tony Abbott's plan means more bushfires for Australia and more pics like this of Sydney," he tweeted, alongside an image of bushfire smoke enveloping the city.

The remarks sparked a backlash online, but Mr Bandt denied it was an act of political opportunism.

"I don't think that talking about protecting the Australian way of life and stopping fires from happening in the future is startling," he said.

We have launched a Bushfire Relief Appeal to help those affected by
#nswfires
. If you'd like to donate, please visit
http://t.co/OVHvWPPDwz

9.03am Message of thanks for firefighters who have battled blazes throughout the night.

8.47am Smoky haze over Sydney, with the smell of the bushfires described as "like an ashtray".

8.42am Areas in Sydney's outer west reduced to ash in the wake of a bushfire.

8.34am The mayor of the Blue Mountains has praised the resilience of residents who lost their homes in Thursday's bushfires.

"The worst factors came together at the worst time," Mark Greenhill said.

"We spent the evening ... comforting residents who had lost everything. This has been a very tough 24 hours for the community of the Blue Mountains.

"The resilience that they showed is awesome."

8.05am Information on evacuation centres across NSW can be
found here

In pictures: Bushfires sweep across NSW

8.03am Dramatic images from the frontlines of the Springwood fire.

7.53am
Factbox: Bushfire resources across Australia

7.50am  Numerous schools are closed on Friday.

7.40am Stay with us throughout the day for live updates on the battle against bushfires in NSW.

In pictures: Bushfires sweep across NSW