The NSW budget will stay in deficit for the foreseeable future as Liberal treasurer Dominic Perrottet promises to spend big to keep people in work. 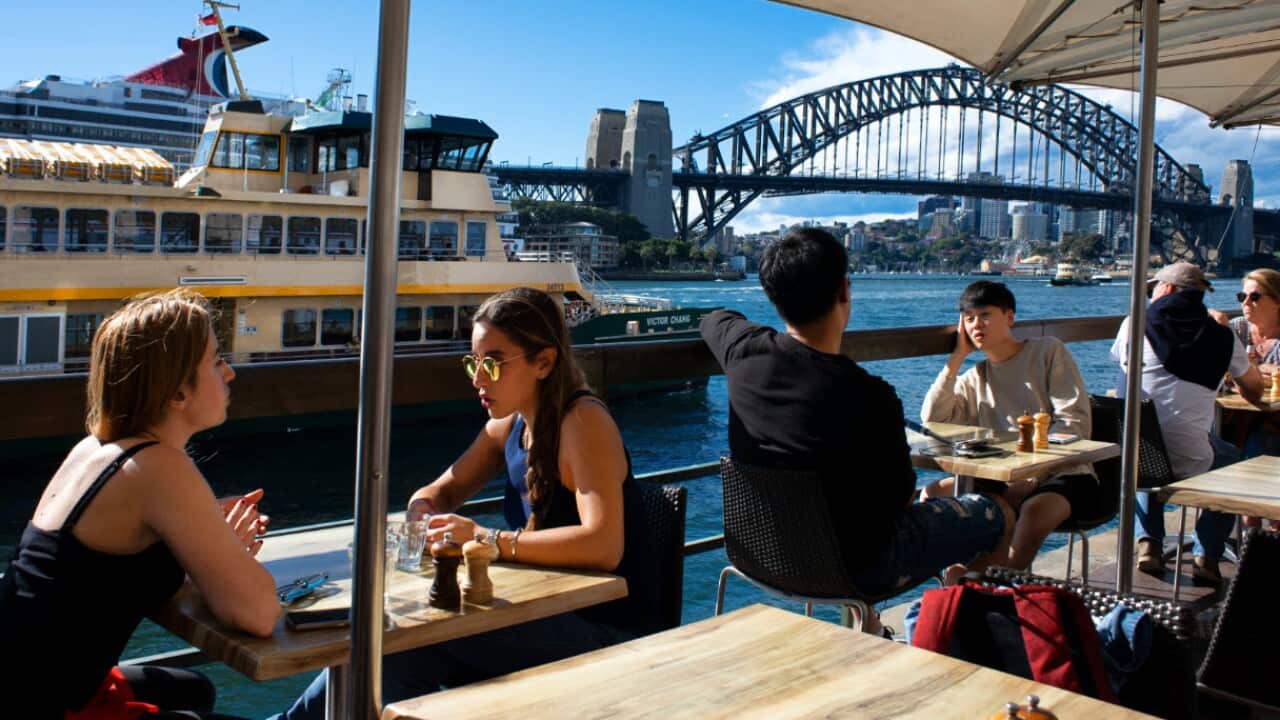 Restaurant vouchers, record spending on infrastructure and tax cuts are bricks in the path back to prosperity in NSW Treasurer Dominic Perrottet's pandemic budget.

At a cost of $500 million, each adult resident will be given four $25 digital vouchers to use at eateries and on arts and tourism attractions across the state.

Sydney CBD will host a pilot next month before a statewide rollout.

Advertisement
NSW's six-year streak of budget surpluses officially ended in the year to 30 June, going $6.9 billion into the red, while the forecast deficit for 2020/21 is $16 billion.

That's mainly due to $29 billion spent on health and economic support packages to respond to COVID-19.

"This budget is completely appropriate for the time and ensures we get as many people in work as we can," the treasurer told reporters on Tuesday.

"In the good times, we've had strong fiscal management behind the scenes (and) that has our state in a very strong position."

A large growth in expenses goes against Liberal thinking but it's not a budget about ideology, Mr Perrottet said.

"It's about doing what's right.

"My complete focus right now is to use every dollar we have to keep people in work."

Businesses will save an average $34,000 annually due to a rise in the payroll tax threshold to $1.2 million and a temporary cut in the rate from 5.45 per cent to 4.85 per cent over two years.

The changes to the state's most lucrative tax will cost the budget bottom line $2.4 billion, while property stamp duty is expected to be $1.2 billion lower than earlier forecast.

NSW to phase out stamp duty

An annual property levy could replace stamp duty for NSW homebuyers under proposed tax changes in the budget, which have opened the door for national reform.

Instead of being slugged an average $34,000 in stamp duty at the time of purchasing a property, the impost would be spread over a number of years to help more people enter the market.

Mr Perrottet said the plan is an example of NSW setting a tax agenda that could have national significance, pointing to the need for talks with Canberra.

"Tax reform is challenging, it is tough, it's been talked about for a long time," he said.

"We have great unity among the states ... to work with the Commonwealth government to drive reform."

He said the federal government in the past had assisted states with asset recycling incentives, for example, to improve systems.

"For too long we have a system that states that perform get penalised and states that don't get paid and that is not a strong federal system.

"We need to improve it and this work will move our tax system to a much better place."

The stamp duty proposal will go to public consultation until March.

The scheme could reduce outlays by about $20,000 over the first four years of home ownership and would be capped at the rate calculated at the point of purchase.

Like all forecasts, that's based on the assumption a coronavirus vaccine will be available to Australians in the second quarter of 2021.

If it takes a year longer, keeping international borders closed and migrants away, household consumption will remain suppressed and unemployment is forecast to rise again in 2022/23 to 6.75 per cent.

READ MORE
'The light at the end of the tunnel': Moderna says its coronavirus vaccine is 94.5 per cent effective

But Mr Perrottet said it needs to be put in perspective, with Victoria's net debt at 8.5 per cent before the pandemic and NSW government 10-year bonds being issued at 1.1 per cent.

"We will take advantage of these interest rates that are at record lows," he said.

Coronavirus restrictions are still costing the NSW economy $400 million each week, down from $1.4 billion in April.

City-shaping infrastructure including two Sydney metro train lines costing $19.6 billion and a new $1 billion Bankstown and Lidcombe hospital are part of a record $107.1b spend on projects over the next four years.

A new public sector wage policy, pausing increases for senior public servants and keeping others at no more than 1.5 per cent, will save $4.3 billion to June 2024.

The forced changes due to the virus has whetted Mr Perrottet's appetite for further deregulation, saying cutting red tape in the pandemic hasn't caused the world to end.