Lawyer for the Murugappan family says Novak Djokovic’s recent court hearing shows that, with the stroke of a pen, the Immigration Minister could allow the Tamil asylum seeker family to return to their Biloela community. 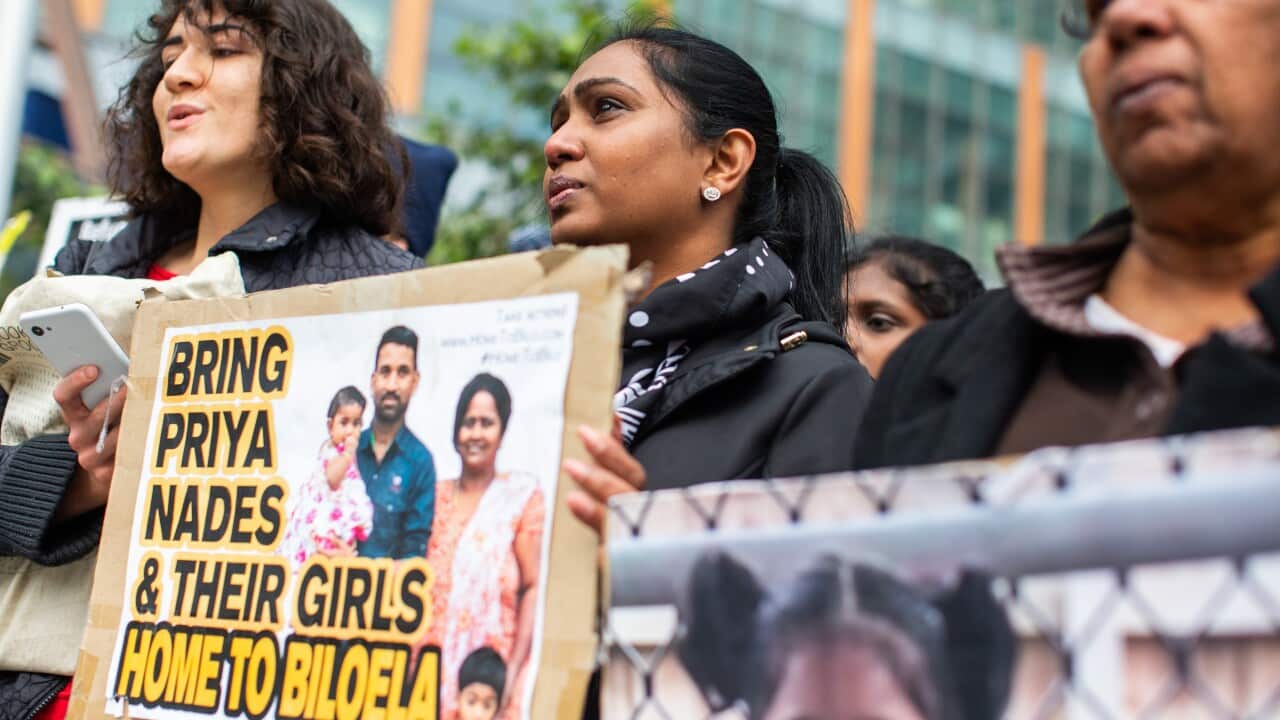 If home truly is where the heart is, then the Murugappan family is currently more than four thousand kilometres away from it.

The Tamil asylum seeker family has been living in community detention in Perth since they were released from Christmas Island last year.

Their time in the detention facility was brought to an end after the family’s youngest daughter Tharnicaa was medically evacuated with a blood infection that left her gravely ill.

Advertisement
Tharnicaa had four teeth surgically removed in 2019 when she was two years old, and they began to rot during her time in a Melbourne detention centre.

The family’s lawyer, Carina Ford, said the Murugappans are doing much better since their release from Christmas Island but they remain plagued with anxiety about what their future holds.

Perth is a far cry away from their previous home in Biloela in central Queensland - a country town whose name means white cockatoo in the local Aboriginal language.

“When they got to Perth, that’s what they found daunting, just the sheer size of it,” said Ms Ford.

“It’s been a long time since they’ve lived in a big city. There’s still a real desire to go back to Biloela and have some certainty.”

Despite both children being born in Australia, Ms Ford said the family remains in limbo, unable to return to their community in Biloela.

“The parents have tried to get the girls as settled into school as possible,” Ms Ford said.

“Nades is holding down two jobs, trying to show he can contribute to Australian society.

“They’re trying to do as good a job as they can do, but they’re desperate to go back to Biloela.”

"Until we have all four members on visas, we are not going to relax,” she told SBS last year.

Novak Djokovic’s visa debacle has renewed focus on the family’s plight this week as a spokesman for Mr Hawke said the Minister was considering using discretionary powers given by Australia's Migration Act to again revoke the tennis star’s visa.

“Minister Hawke will thoroughly consider the matter [but] as the issue is ongoing, for legal reasons it is inappropriate to comment further," the spokesperson said.

Ms Ford said Djokovic’s case shows that, with the stroke of a pen, the Minister could grant Tharnicaa a visa and reunite the family with their Biloela community.

READ MORE
Did the government mislead Australia when it said it got the children out of detention?

But she added when the Minister has previously intervened in the family’s case, it hasn’t been in their best interest.

“The Minister did personally intervene to bring down the bar for the Biloela family, so the bridging visa couldn't be extended,” she said.

“He also used his personal power … not to refer the matter for further consideration for the youngest child.”

Priya and Nades married in Australia after fleeing Sri Lanka’s civil war and arriving separately on people smuggler boats in 2012 and 2013.

The couple said they face persecution if deported to Sri Lanka but the government has claimed the family will never be permanently resettled in Australia.

Former Home Affairs Minister Peter Dutton has previously claimed the family “has not ever been found to be owed protection".

He’s also claimed to show the family compassion would send the wrong signal to people smugglers, telling Nine last June: “We’ve got to be very careful.”

Ms Ford believes there are compelling circumstances for many people who arrive by boat and that their cases deserve to be treated individually.

But she said she doesn’t see the current government backing down on their position.

“When you look at the Djokovic case you sort of think, hang on. Why are we doing this to two children who haven't done anything wrong?

SBS News has contacted the Minister for Immigration for comment.